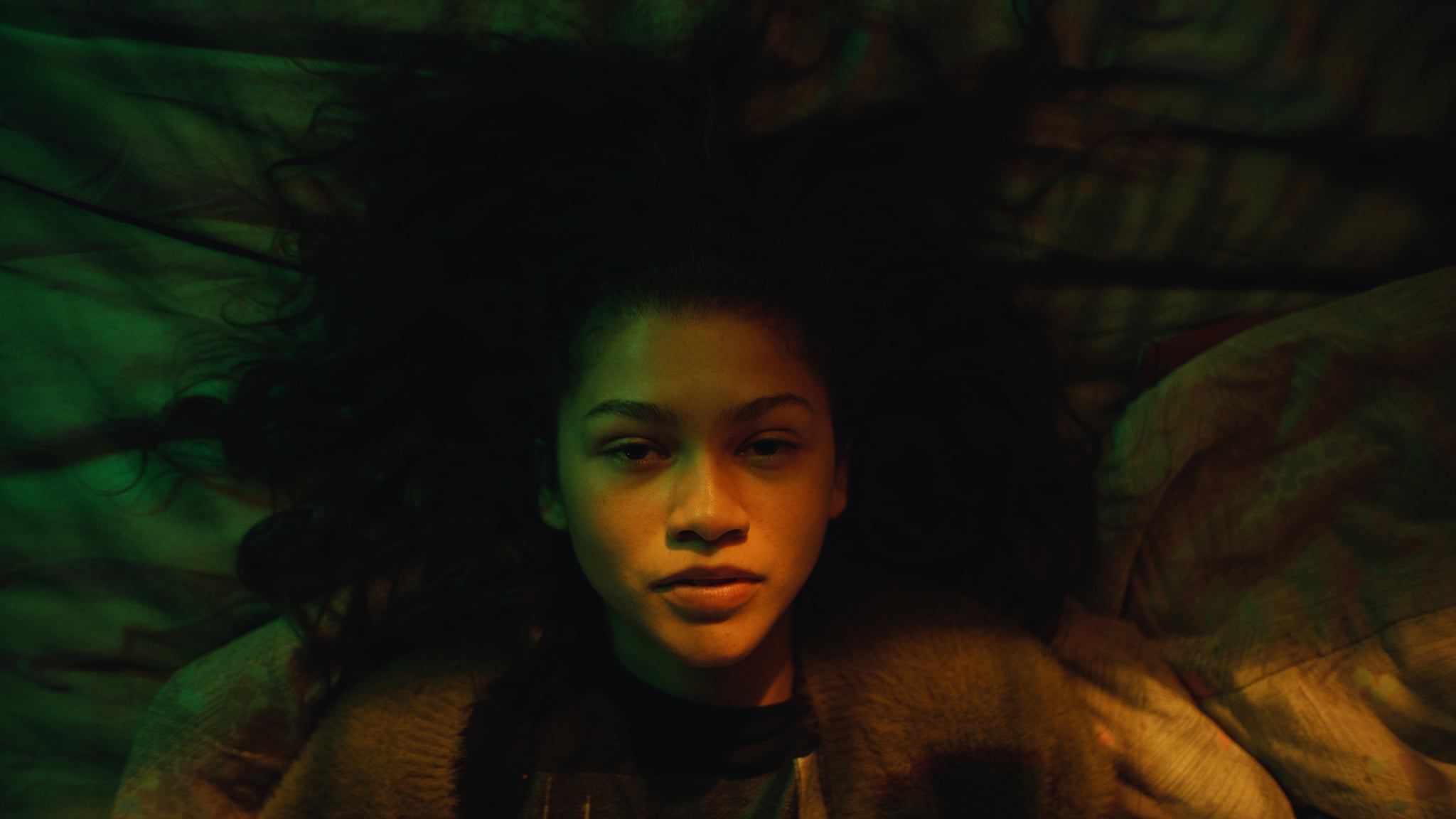 Ever since we met Rue Bennett in the premiere of HBO's teen drama Euphoria, she's been teetering on the razor-sharp edge of sobriety and self-destruction, with her only saving grace appearing in the form of her new best friend, Jules. But their intense relationship is constantly in danger of crumbling thanks to outside elements and Rue's own addiction. It all comes to a head during the season one finale, "And Salt the Earth Behind You." At the end of the tumultuous episode, we're left questioning if Rue's relapse has led to her ultimate demise and how that will play out in season two. Warning: spoilers for the end of the Euphoria finale ahead!

Let's rewind the clock to the beginning of the finale. After the events of the seventh episode, in which Jules falls into bed with someone else while visiting an old friend and Rue digs into the mystery of Jules's relationship with Nate, episode eight opens with Rue in the hospital with a kidney infection. She enjoys the anxiety-free care of the hospital for three days (noting that she loves hospitals because "when you're in a hospital, you have zero responsibilities") and gets a visit from a concerned Jules.

"Did all this happen because I left?" Jules asks her, but Rue promises that isn't the case. Jules apologizes for not telling Rue the whole truth about Nate from the beginning, implying that she's confessed the dirty truth of it all: that Nate was her catfish and he blackmailed her with the nude photos she sent him to get her to lie to the police about seeing Tyler assault Maddy.

Related:
Why Tyler Is Such an Important Euphoria Character, Even Though We Barely Know Him

Later, it seems like things are copacetic between the two as they get ready for their Winter formal together, but it's obvious that Rue and Jules are still on different wavelengths. The two haven't been able to put a title and boundaries on their relationship, which makes it more awkward when Jules tells Rue about her hooking up with Anna while she was out of town. When they get to the dance, Jules continually texts the other girl and sneaks away to send her selfies from the bathroom, leaving Rue with their friends. When Rue finds her in one of the stalls, Jules asks why Rue doesn't ever kiss her. "I kiss you," Rue shyly insists, but Jules says she wants Rue to kiss her like she wants her "so bad that you don't even ask."

What will Rue do when Jules eventually grows tired of their suburb and leaves her behind?

Jules is likely referencing her tryst with Anna, where the older girl bit her hard enough to leave a bruise that the two teens marveled over before the dance, but Rue isn't able to come up with an answer in the moment. Jules quickly moves on, deciding they need to dance instead, but the moment lingers in Rue's mind. When she later goes to confront Nate for calling the cops on Fez, he fires back with a rhetorical question: what will Rue do when Jules eventually grows tired of their suburb and leaves her behind?

The question spurs Rue into suggesting to Jules that they pack up and board a train to anywhere, leaving everything behind. Jules is totally on board, but by the time they get to the train station, Rue is fully second-guessing the plan. She voices her uncertainty several times to Jules, and even though Jules resorts to begging and telling Rue she loves her, Rue stays behind instead as Jules rides away to an undisclosed location.

As Rue makes her way back home, she slips into a panic attack, sobbing as she mentally cycles through memories of her life — good times with her mother and sister, a brutal argument with her mother that ends with Rue getting slapped, and her father's heartbreaking death. When she gets home, she snorts a line of drugs before collapsing back onto her bed. What follows is an intriguing musical sequence that sees Rue messily wandering the halls of her home to go outside, where she's carried around by a performing choir, being lifted up and moved around like a puppet. When it comes to a close, Rue climbs atop a pile of bodies, standing there for a moment, before diving off the edge and out of sight. The last frame of the episode is a bright light shining on the empty space where Rue was standing moments before; then the screen turns black and a male voice states, "Until then."

The most obvious explanation is that Rue's relapse has taken us full circle to the beginning of the season, and she's overdosed once more. Except this time, her overdose has killed her and the theory about her narration taking place from beyond the grave is proven true. But there's another way to look at this scene, and it all depends on listening to the lyrics of the closing song, "All For Us."

Zendaya sings, "When it all comes down to it / I hope one of you come back to remind me of who I was / When I go disappear / Into that good night." The phrase "that good night" likely references death, which is famously referenced as such in Dylan Thomas's poem, "Do not go gentle into that good night." Much like the poem, Rue relapsing isn't about her deciding to die after ending her relationship with Jules, it's about her difficult path to resisting death.

Related:
Can't Get That Song From Euphoria's Season 1 Finale Out of Your Head? Neither Can We

Yes, she's done this incredibly f*cked-up thing by turning back to drugs, but that's her innate self-destruction rearing its ugly head. She's slipped after doing one of the hardest things she's ever had to do, which is pick her family over her love for Jules. She's taken this giant leap (get it?) away from what she's seen as her light, and it's led to her falling over the edge she had been tiptoeing over for the past eight episodes. But as the lyrics say, when it all comes down to it, she's hoping someone will remind her that bad times still happen in the good ones and she can still be that happy person she was before she relapsed.

There's no way of knowing what season two of Euphoria will bring, but we're optimistic it won't be the end of Rue's story.