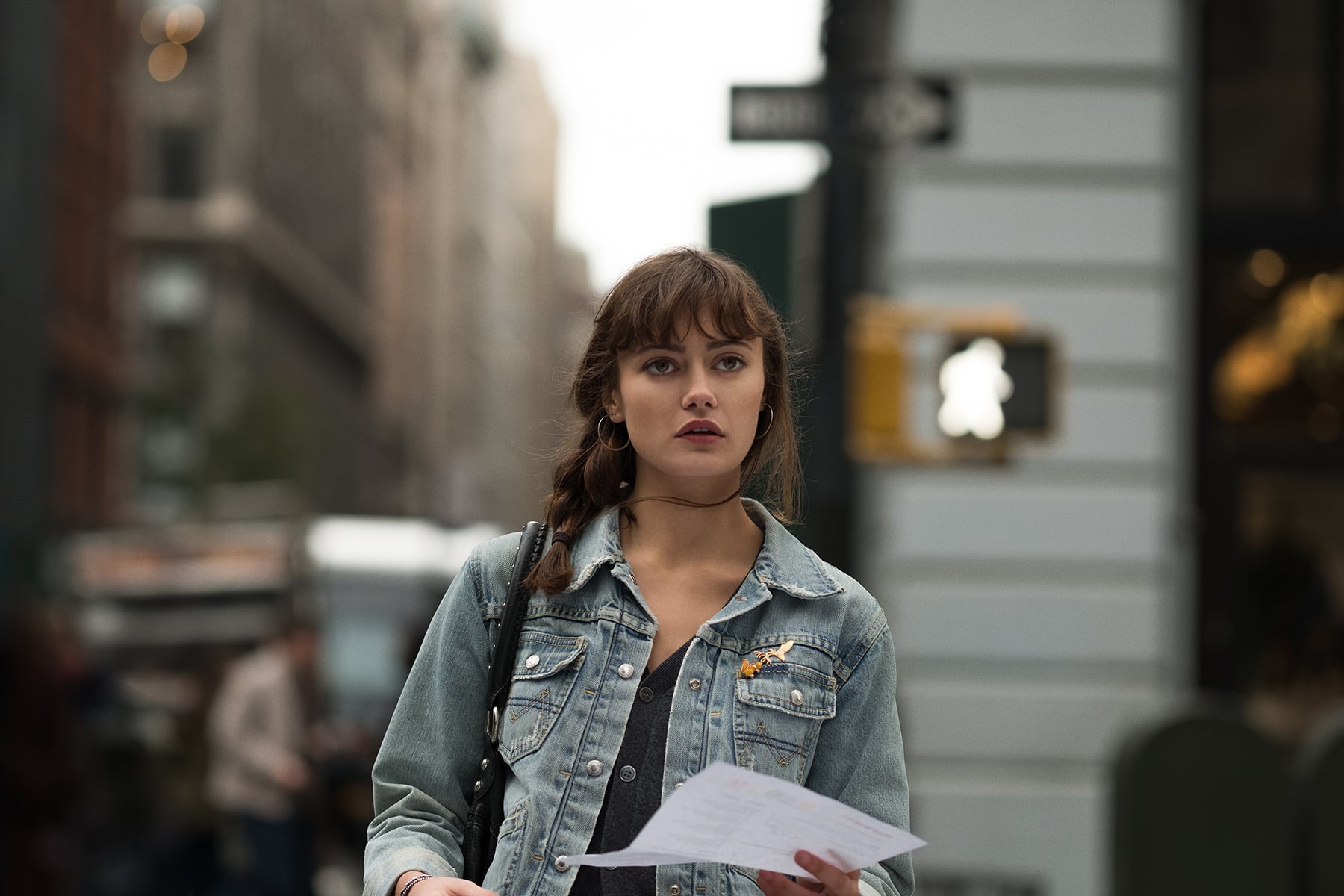 For Ella Purnell, signing on to Sweetbitter might have been the easiest career choice she's ever made. Starz's TV adaptation of Stephanie Danler's hit 2016 novel, which premieres May 10, ended up being "literally the most relatable" script the 21-year-old British actress had ever read, for good reason. The series tells the story of Tess, a young woman who boldly ditches her dull life in the Midwest for an adventure in New York City, where she comes of age while working as a server in one of the city's most revered downtown restaurants.

Since Purnell had recently moved to the city herself, digging in to her character proved to be far easier than usual, and it shows — her performance, much like the six-episode series itself, is genuine and utterly charming. In anticipation of the drama's May 10 premiere, I hopped on the phone with the Churchill star to discuss everything from oyster allergies to the three-plate carry.

POPSUGAR: Sweetbitter is rooted in New York City, but it's also such a classic story, exploring all the hurdles we have to overcome while figuring out what we really want to do in life. Did Tess's story resonate with you even more because of that? I imagine trying to make it as an actor might be similar.

Ella Purnell: Yeah, absolutely. That's what first attracted me to the script so much, because it was literally the most relatable thing I'd literally ever read. Here is a twentysomething-year-old having basically what is an existential crisis, and unapologetically saying, "I don't know who I am, I don't know what I want, I don't know where I'm going, and I'm OK with that." And she's really openly saying, "help me." Like, "I need direction, I need somebody to take a chance on me." I'll be honest, none of my friends . . . well, all my friends are either just going into uni or coming out of uni, and everyone's freaking out! It's such a scary age, and I can definitely vouch for that. Being an actor is terrifying because you never know when you're going to work again. And being 20 is terrifying because you're like, What the heck is happening?! You go from being in school and having to ask to use the restrooms to being thrown into the world, being told you have to have a baby and get married by age 30. And also you've got to pay taxes! Like, what is this? Nobody knows, it's terrifying.

PS: So had you read the book before you saw the script, or is that something that you got into after you had already signed on?

EP: No, I actually hadn't read the book before. I got the audition, and I read the first few pages of the pilot. That was the only version I had, the first few pages of the pilot, and that's all I had to go on. So I did my first two auditions whilst reading the book. I think I finally finished the book just before my screen test. I'm kind of a slow reader, it takes me a while to get through books. But I knew from reading the first 10 pages of the book that it was going to be something that I wanted. It just had so much mystery. You don't know who she is, where she came from. The character I invested in really fast, as well as the actual style of writing, which I think was just so beautiful. I knew that Stephanie was going to be involved in the show, I mean she wrote it and is one of the show's producers. I knew that it was going to be something really special.

PS: Since Stephanie was so involved with the show, did you have a chance to really sit down and chat with her about all the ins and outs of your character before you guys started filming?

EP: Yes! She took me for a lunch at Marlow & Sons, which has some amazing oysters. She was like, "You should try the oysters!" And I had to be like, "No, I'm allergic to fish." So that was great. [Laughter] Yeah, we went there and we actually talked for a really long time about her experiences in the restaurant industry and her life experiences that the character is based on. It was also me just going, "Ahh, help me!" I'd just moved to New York, I didn't know anyone. I didn't know where I was going, and I'd never done TV before. I literally was just thrown in the deep end, and I was really freaked out. She taught me everything. She showed me the ropes, she calmed me down from my freak-outs, as well as giving me recommendations. And then having so much [information] about Tess and actually giving me such a huge . . . her faith in me gave me such a big amount of confidence in myself. I love the book so much, and I was so scared of messing up and not doing it justice. She said, "It's OK. TV Tess is going to be a cousin of Book Tess, and we're going to collaborate together. We're going to have a chance to create a new version of something together," which I thought was just amazing. It's such an amazing opportunity.

PS: So for TV Tess, did you bring any part of yourself or your own experiences into the performance?

EP: I think, yeah, I did, but I didn't do it consciously, if that makes any sense. I didn't think, "Oh, I'm going to add this line, I'm going to add this thing." A lot of people say this, but I really genuinely mean it from the bottom of my heart — and any of my friends and family, when they watch the show, will vouch for this — I've never played a character who's so similar to myself. She is constantly messing up, she is super awkward and weird and just trying to figure out her life in a really honest and open way. So I think if there was anything of myself in there it would have just been a very natural progression and grown kind of organically, rather than a preplanned thing. I mean, Steph always says that it's like a fusion of Tess and Ella in TV Tess. [Laughter] If that makes any sense!

PS: One of the most interesting parts of the show is your character's dynamic with Simone as their relationship unfolds throughout the episodes. Both in the novel and in the show, it's so hard to pin down what Simone's true intentions are for Tess. Does she actually want the best for her? Does she want to be her? I was just wondering what your read on their relationship is.

EP: That's a really good question. I think about it quite a lot. Simone and Tess, and Simone and Jake, I think the two go hand in hand. Tess is so intrigued. Like, what is the relationship between Simone and Jake, and what do they want from her, and how is she stuck in the middle of it? She has never met anybody like either of those people in her life, I think. For Simone, she represents the mind, you know? She's completely intellectually stimulating. She's into poetry and art, and she's also so authoritative, so beautiful. She's everything Tess has ever wanted to be. It's the first time Tess has ever met anybody and said, "I want that. That's what I want. That's who I want to be." It's hugely inspiring for her. I think on the flip side, maybe Simone sees a bit of herself in Tess. Maybe it's somebody to control, maybe it's an adoring fan, I'm not sure. But the relationship between them is very similar to what me and Steph have, actually, in a sort of mentorship dynamic. I think Tess is just an adoring fan and a really quick learner, and has a genuine passion and want and love for this industry that she's discovering. Maybe it's the journey that Simone really, really likes and sort of admires in her own way.

PS: Yeah, it's almost like the real romance in the show is between Tess and Simone, in a way, even though Jake is obviously her love interest.

EP: When it comes to Jake, I think it's almost the opposite of Simone. It's not mind, it's not spiritual, it's not beautiful. It's raw. They're almost the two sides of New York: the beautiful glamorous side, and the really gritty, hard, lonely side. Jake is rough, he has edges, and it's a really sort of body attraction, an instinctive sort of need or want. He's a bit of a bad boy, and he's quite standoffish. He's quite rude and hard. So to sort of break the outside open, I think that is really intriguing for Tess as well. She's finally met somebody who doesn't just play nice to keep the peace, which I think is something that Tess has always done her whole life. She suddenly meets someone who just really doesn't give a sh*t, and there's something attractive in that, I suppose.

PS: Given the show's obsession with food, please tell me you guys got to do a bunch of wine tastings or cooking classes to prepare.

EP: We had a whole week of boot camp, which was wicked. I didn't have to do as much as everybody else because my character, obviously, isn't supposed to know what she's doing. But everybody else had to do two weeks of it, and we did everything. We had a front of house consultant called Justine, who actually trained Steph when she worked at the Union Square Cafe and still works in the restaurant industry. She taught us everything, how to walk around each other and get to know each other in a sort of choreographed environment, which is a result of working at a restaurant and getting to know these people like a family. We also had to learn a lot of practical things, like learning how to lay a table, the napkins, opening a bottle of wine, how to stack the glasses, and the three-plate carry. All of that really practical stuff that takes years and years of practice to look amazing. We all tried to cram it in three weeks! [Laughter] So we did all of that, and I really wanted to kind of go into it fresh and naive and new to it in the same way that Tess does. So I sort of kept my experience to a minimum.