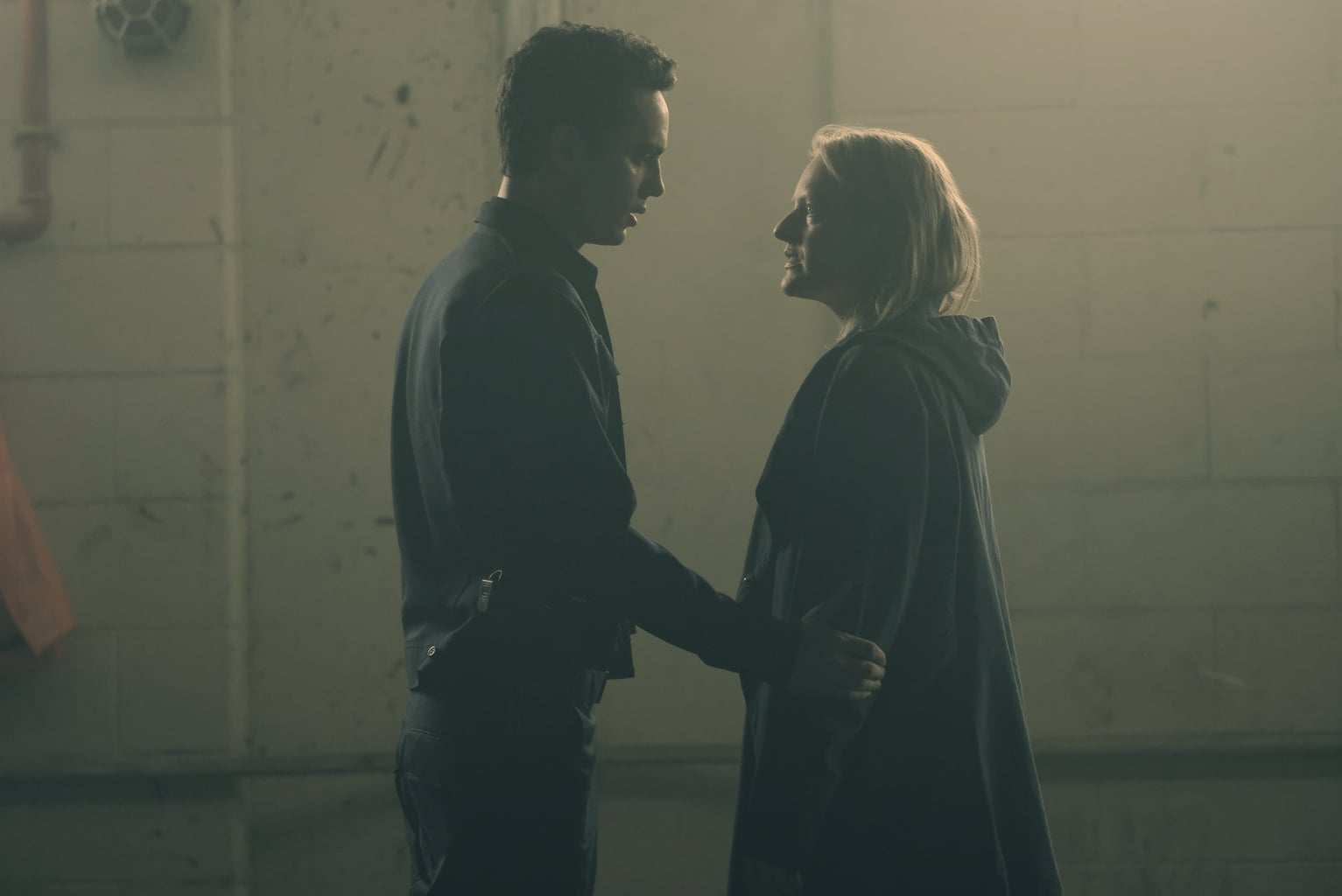 If you're here, then you deserve a big round of applause — you survived the first brutal, bloody, bleak-as-f*ck episode of The Handmaid's Tale season two! Sure, June finally escapes her harrowing situation with Aunt Lydia and the Waterfords, but is her freedom going to last? Will she and Nick stay together? Where's Ofglen/Emily these days? Oh, and do you think Hulu will start paying for group therapy sessions? Because I think we all might need it after the second episode, which answers most of the above questions. Let's get to it, shall we?

Related:
Confused About THAT Brutal Moment in The Handmaid's Tale Premiere? We Can Help

1. June's Life at the Boston Globe

Nick (Max Minghella) sends June (Elisabeth Moss) packing to a new safe house, and this time it's in a well-known Boston building: the former headquarters of The Boston Globe. During her ride there (which is in the back of an open truck, lying flat on her back to avoid anyone seeing her), June reflects on her current situation: "Gilead is within you, like the spirit of the lord. Or the commander's cock. Or cancer." It's not an optimistic outlook, but I guess we don't watch The Handmaid's Tale for Chicken Soup for the Soul quotes.

June's new digs are as interesting as they are tragic. She combs through a few of the office's cubicles, where she discovers reminders of life before Gilead took over: coffee mugs, stuffed animals, a single high heel. Later she makes her way to the building's lower level, which houses the paper's massive press as well as the gory remnants of a firing squad — blood and bullet holes are splattered across the walls. Because of this, June loses her mind when Nick tells her she has to stay there for a few weeks. She takes his keys and gun and decides she's going to try to make it on her own by driving north, before thinking better of it. They make up in the hottest way possible (sex against the wall, duh), and June is able to take back a little bit of control in their relationship.

After stealing a car and running down a few soldiers in the first season, Emily (Alexis Bledel) is shipped off to the Colonies. It's a desolate, barren landscape where "unwomen" — a woman who has been determined to be useless for the Republic's needs — are made to farm toxic fields that are slowly poisoning them to death. The former handmaids are balding, covered in pus-filled sores, and their teeth are falling out. Emily, too, looks like she's aged about 10 years since we last saw her, with a face covered in cracked, dry skin. Despite the rough conditions, the women there have formed a bond with each other. Emily acts as the group's doctor, dispensing pilfered medicine when she can to the sickest residents. 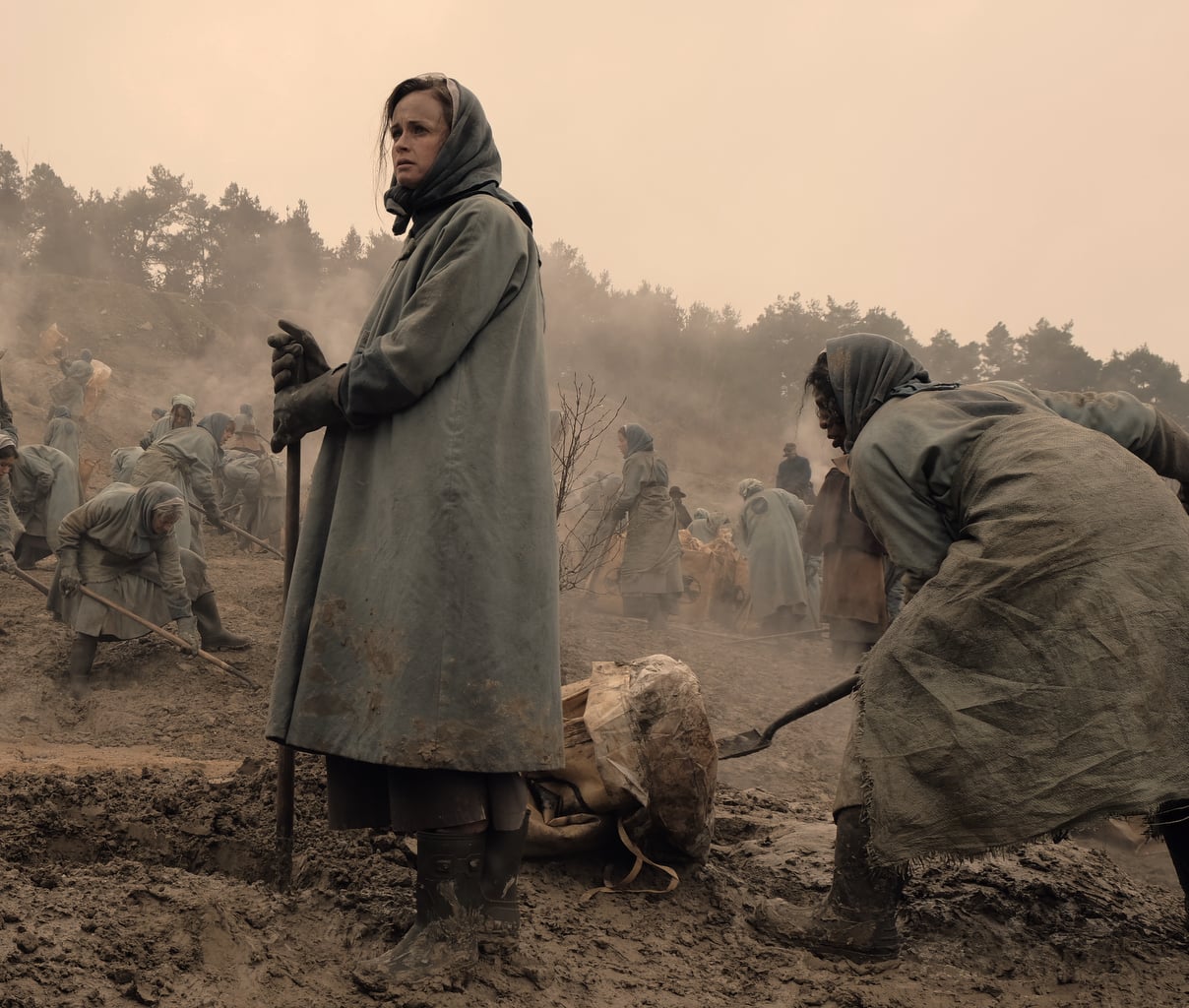 3. A Flashback to Emily Before Gilead

In season one Emily briefly mentions to June that she had a wife (Argo's Clea DuVall) and son, but this episode's flashback gives us a full, gut-wrenching picture of her previous life. It begins with Emily lecturing at a biology class at a university in Boston, where she encourages her female students to stick with the course and doesn't hesitate to tell off a rude mansplainer (let's just say she'd score high on Rate My Professors if I was in her class). Unfortunately her phone background — which is of her wife and young son, Oliver — gets her in trouble; apparently some students complain that her sexuality is not creating a good teaching environment.

Her boss, a gay man named Dan (American Horror Story's John Carroll Lynch), says he feels her pain, but informs her that the school won't allow her to teach next semester. She defiantly tells him she's going to still do it anyway. Not long after their conversation Dan is found hanging from a noose outside the university. We don't know for sure if he did it himself since we don't see it happen, but since the word "f*ggot" is spray painted under his body, it's safe to assume the beginnings of Gilead's reign of terror have begun.

Related:
Now That The Handmaid's Tale Has Moved Beyond the Book, Who's Actually Writing It?

Once the university "purges" start, Emily and her wife, Sylvia, decide they need to get to Canada ASAP. They get to the airport and find it's teeming with people trying to do the same, but only Sylvia and Oliver are allowed to go through. Even though Sylvia is Canadian and Emily is her wife, the officials at the airport tell them that their marriage has been outlawed in the short amount of time it took them to arrive there. Emily tearfully tells them to go on without her to safety, promising that she'll find a way to meet them. 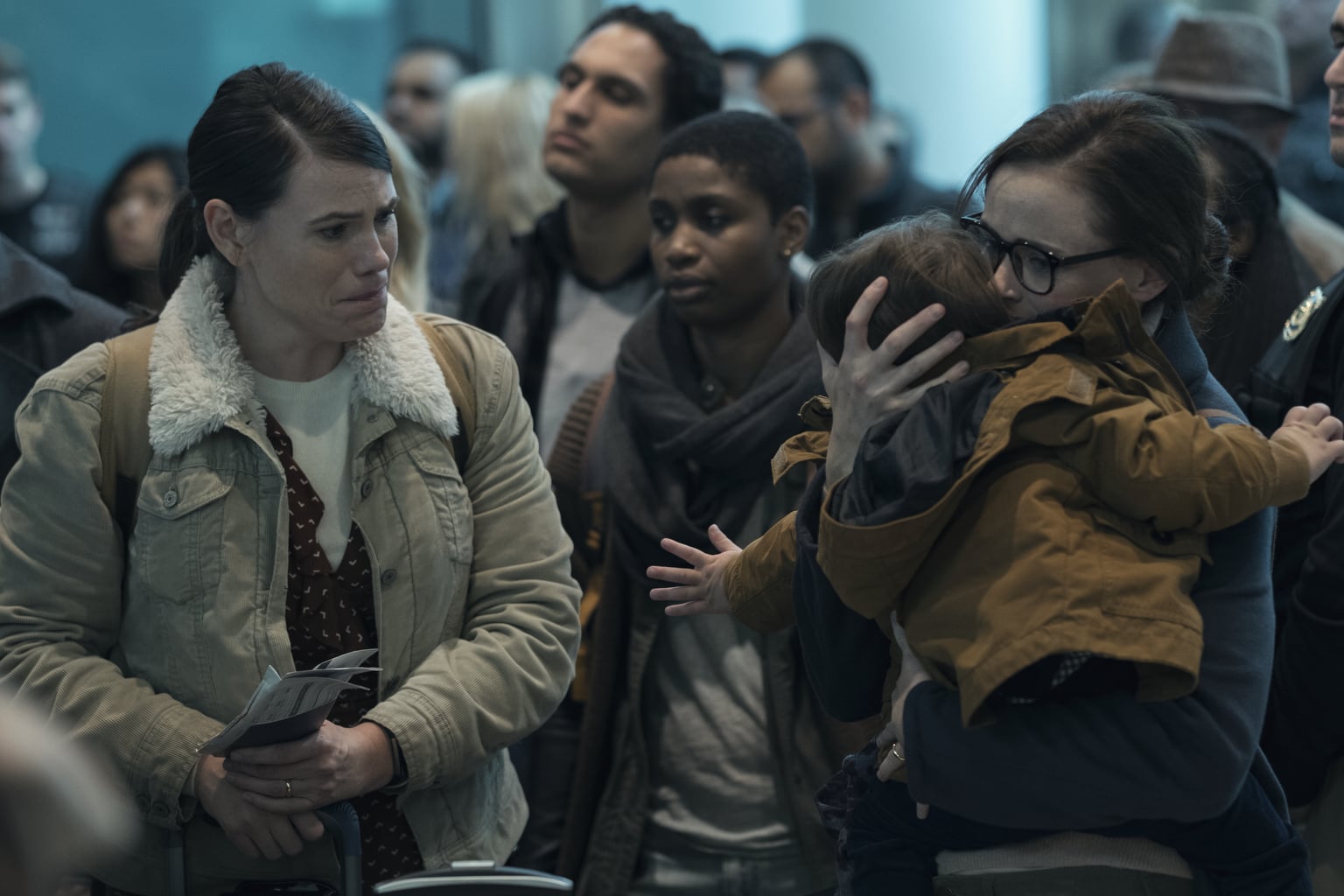 5. An Unexpected Visitor to the Colonies

An unnamed former Wife (Marisa Tomei) of a Commander is sent to the Colonies because she "committed a sin of the flesh." She tells Emily her husband was so busy with the handmaid that she began a relationship with someone else, but claims she "fell in love" and hopes god takes pity on her. None of the women take kindly to her, especially when she kneels by her bed at night and loudly prays in front of everyone there. At first it seems like Emily feels bad for her when they share a conversation about their lives pre-Gilead (Tomei's character says she didn't support the "university purges" and had an MFA). She even offers her some of her precious antibiotics.

However, it soon becomes clear that Emily's mercy does not extend to the women who allowed Gilead to flourish, and that the "medicine" she shared was actually a poison of some kind. The Wife falls to the ground, choking, as Emily tells her, "Some things can't be forgiven . . . you should die alone." At the end of the episode we get a final glimpse of just how ruthless Emily has become: the Wife is found hanging on a cross outside in the toxic fields.