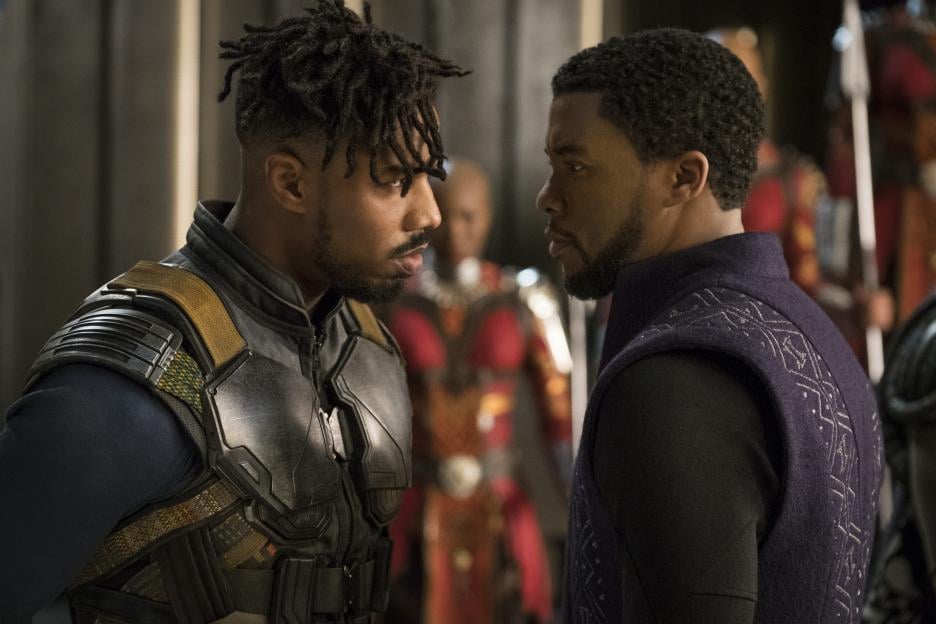 While adapting Black Panther into a solo superhero movie, director Ryan Coogler stays relatively faithful to the original Marvel comics, but he does exercise creative license over the source material. In case you're curious about the storylines that could have been in the Black Panther movie, we're here to break down the key differences between the Black Panther characters in the Marvel comics and the Marvel Cinematic Universe. Here are some things that happened in the comics that didn't make it to the big screen. We have some spoilers ahead, so read at your own discretion!

1. T'Challa takes over the throne at a younger age.

T'Challa is older in the movies — he's around his 30s — than he is in the comic books when he inherits the throne to rule Wakanda. He's usually around his teens or 20s when he becomes king in the comics, depending on which version you read. In Captain America: Civil War, T'Challa's father dies during a terrorist attack orchestrated by Helmut Zemo at the Vienna International Centre. Upon returning to Wakanda, T'Challa becomes king immediately. The story goes a little differently in the comics. King T'Chaka dies at the hands of Ulysses Klaue in the comics. After he dies, his brother, S'yan, takes over as the leader of Wakanda until T'Challa is old enough to rule.

2. Erik Killmonger grows up in Wakanda.

In the movie, Coogler gives a shout-out to his hometown (and the birthplace of the revolutionary Black Panther Party, no less): Oakland, CA. It's where Killmonger's father, King T'Chaka's brother, falls in love with an American woman and has him. Killmonger grows up in Oakland, where he becomes determined to avenge his father's death. The comics have a slightly less sweet backstory. In the comics, Killmonger is a Wakandan native. He only resides in Harlem because his family becomes exiled from Wakanda after T'Challa learns that Killmonger's father had been working with Klaue. Wakandan native or not, we're still swooning over Michael B. Jordan's charismatic villain.

3. Nakia is a jealous lover.

Nakia and T'Challa's love story is fairly lighthearted and fun in the movie. They're exes who are on good terms, which shows through Chadwick Boseman and Lupita Nyong'o's easy chemistry. Things take a bitter turn in the comics. Whereas we see T'Challa crushing on Nakia in the movie, it's the reverse situation in the comics. Nakia is a jealous lover who becomes exiled from Wakanda when she plots to kill the king's ex-girlfriend. She even teams up with Killmonger and adopts the name Malice as her villainous alter ego.

4. Ulysses Klaue loses his arm in a battle that takes place in Wakanda.

The Marvel Cinematic Universe introduces Ulysses Klaue as a South African black market arms dealer and smuggler. He loses his arm after Ultron ruthlessly slices it off in Avengers: Age of Ultron. We see him again in Black Panther, where he's teaming up with Killmonger to get his hands on vibranium. In the comics, he's actually a Dutch physicist who's trying to steal vibranium from Wakanda. He manages to kill King T'Chaka but loses his arm in a battle with T'Challa. Oh, and while Klaue makes it in the comics, he doesn't have such a nice fate in Black Panther.

While we haven't seen these stories on the big screen, we wouldn't count them out yet. If Marvel movies have shown us anything, it's that it's possible to have different iterations of your favorite superhero — just look at Spider-Man. And who knows what might happen in the inevitable Black Panther sequel? We might see Klaue pop up again (though he does look pretty dead) or Nakia transform into Malice. Only time will tell.