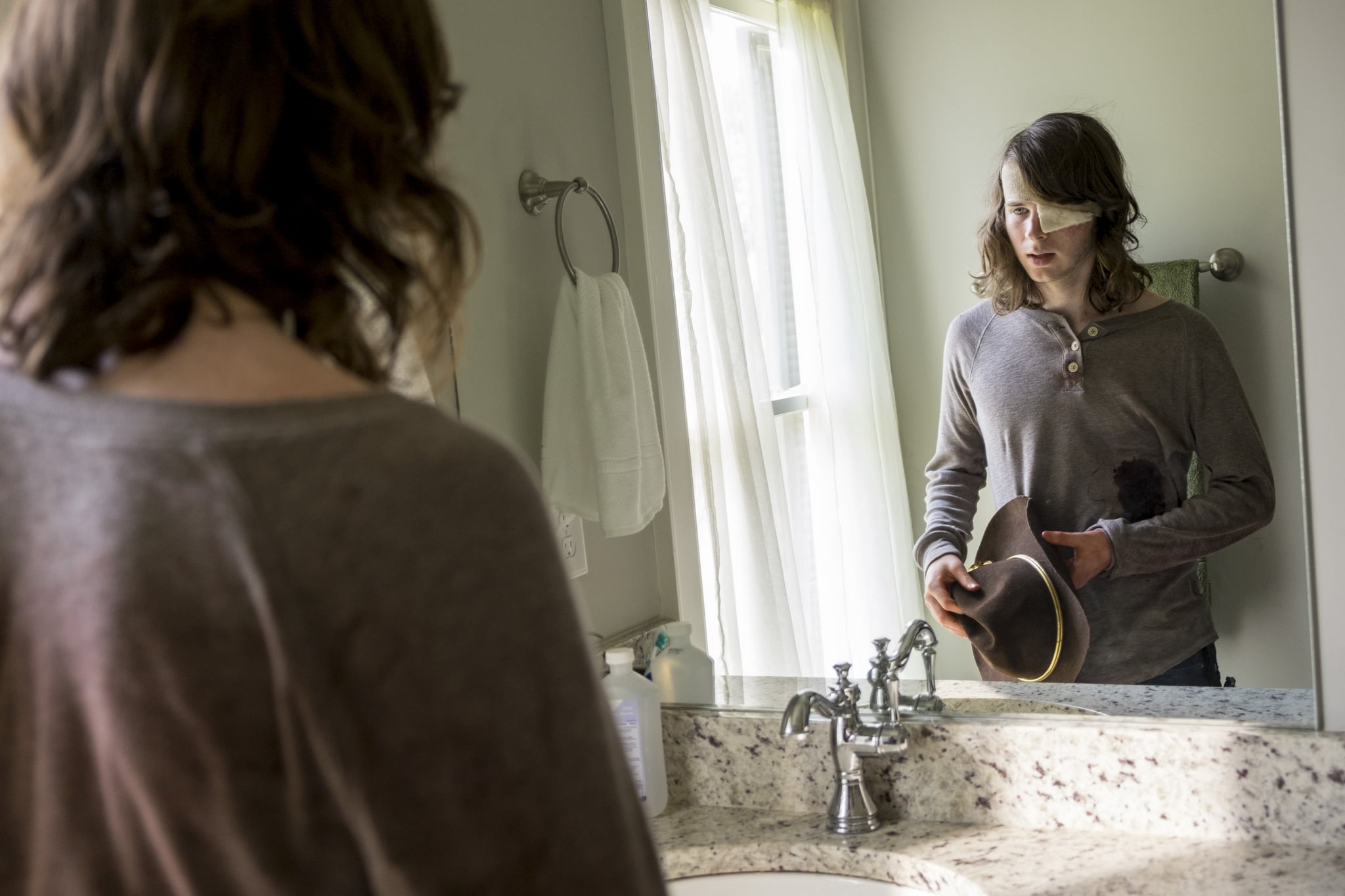 Spoilers for The Walking Dead below!

Welp. Here we are at last.

Carl Grimes's fate on The Walking Dead has been looking very grim ever since the midseason finale revealed a surprise bite mark on his belly. Watching it unfold in excruciating detail like it does on the midseason premiere, though, is still pretty hard to endure.

For starters, we get to actually witness the event that cost him his future, which hadn't been shown in previous episodes. As expected, he receives the wound while trying to protect Siddiq from some menacing walkers, and he's ambushed by a biter that gets the better of him during the encounter.

Surprisingly, Carl handles the development fairly well, simply heading home to change his shirt before going about the business of enjoying his final days. He spends some time making blue paint handprints on the porch with Judith, taking Siddiq some food, writing goodbye letters to his loved ones, and even — literally — soaking in the sun. That old adage about the moments before death leading to authentic living sure seems true with young Carl throughout much of the episode.

Of course, the sickness eventually sets in, and soon we're right back where we started: Rick and Michonne taking in the sight of Carl's gash and resulting pale skin and realizing what's about to happen to the boy they've been fighting to protect for so long. What's worse is Rick has very little time to move through the various stages of grief and is ultimately rendered rather speechless as he watches his son accept his fate and offer his goodbyes.

To Judith, he offers his inherited sheriff's cap and makes her promise to be good for Rick and Michonne. Then he urges Michonne not to be sad or angry about what's happened to him so that she can be there for the family he's being forced to leave behind. Siddiq promises to honor him and make his death mean something, and Daryl Dixon throws in a veritable "way to go, champ" as a way to thank for him sheltering everyone in the sewers while Negan and the Saviors did their worst to the neighborhood above.

Naturally, it's his final moments with Rick that prove to be the most excruciating. Not only do we learn that all those "old man Rick" flash-forward sequences that have been popping up throughout the season aren't real but rather figments of Carl's imagination as he's dying, but also Carl encourages his father to become the man who could put down his weapons and make peace with his enemies like he did so many moons before. Carl has basically pictured the world becoming new and improved without him, with Rick and Michonne raising Judith in a peaceful Alexandria that's full of farm crops and goodwill among all inhabitants — even Negan, who's picking his tomatoes in this dreamscape.

"I saw it . . . Michonne's happy. Judith is older. She's listening to the songs that I used to before. Alexandria's bigger. There's new houses, crops, and people working. Everybody living. Helping everybody else live. You can still be who you were. That's how it can be. It could," he tells his devastated father.

He also lays out his biggest regret: once killing a boy who was trying to lay down his arms during the prison battle. Carl says that he was getting too quick to kill, but his father saw as much and decided to teach him a better way (a message that is also very timely, as young Henry is nearing the same pitfalls with his own ease of violence and needs some guidance to avoid becoming the next Lizzie). Hearing that, Rick promises to "make it real" — meaning he's going to do his best to bring peace to the world for everyone Carl loves as a token of tribute to his courage.

Rick and Michonne carry Carl to one of the few buildings left standing and allow him to finally end his own life, rather than doing it themselves or letting him fully become a walker. Just as Carl stepped up to end Lori's suffering before she could become a walker, so sounds his bullet tonight, as Rick and Michonne wait outside.

The last we see of Carl is the white sheet that covers his lifeless form as his parents dig a burial plot in silent agony, and you're crying; we're crying. Everybody's crying.