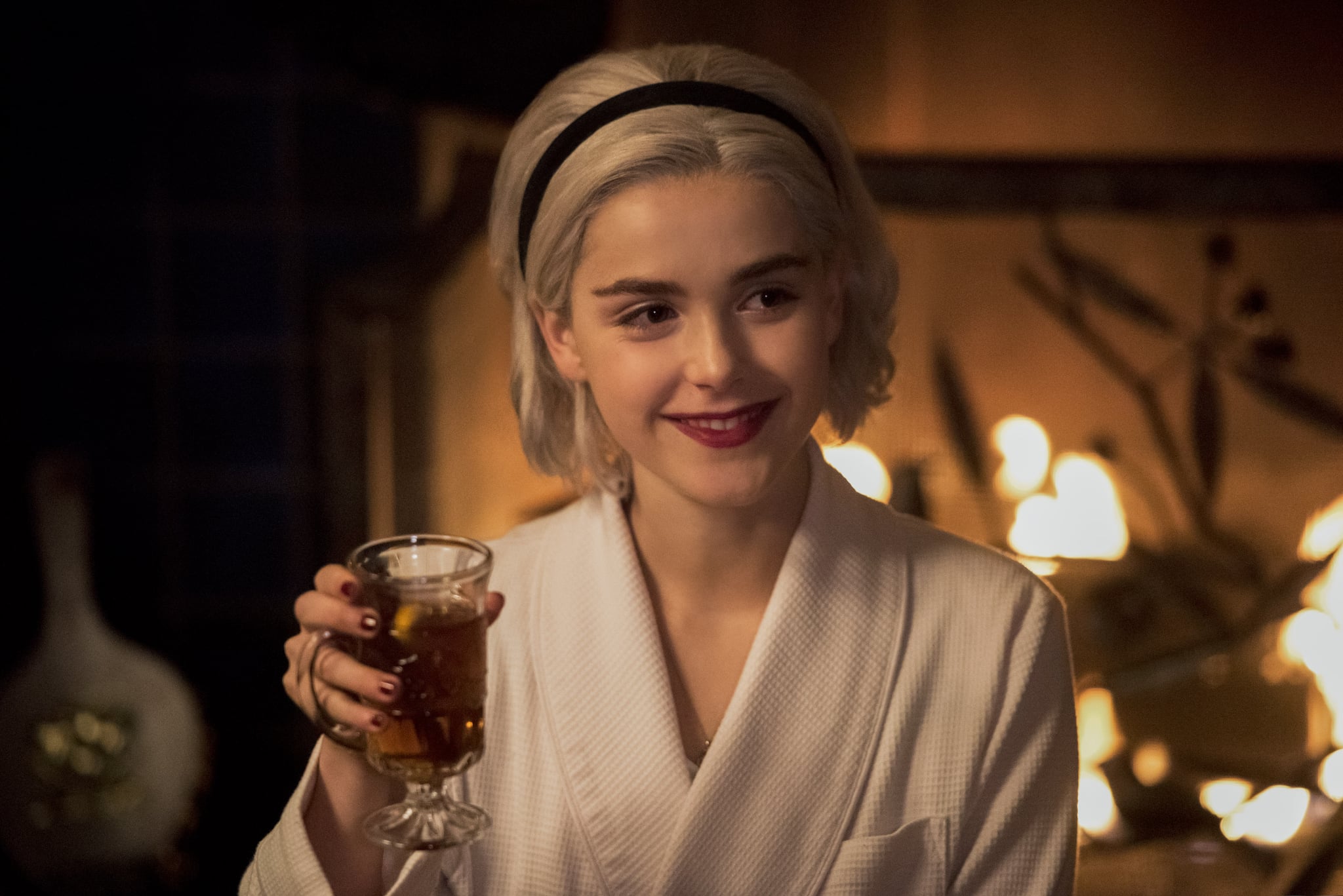 Even though it's only been a few months since Chilling Adventures of Sabrina last aired new episodes, it feels like it's been ages! The supernatural drama is about to return for the second half of its first full season on Netflix, and we're excited to see what happens next to Sabrina, Harvey, Zelda, Hilda, and the mortals and witches in their orbits. If you need a quick refresher on where the show left off, we've got you covered.

In the first season finale, Sabrina finally does sign her name in the Dark Lord's book in order to get the power needed to defeat the Red Angel of Death. To save her loved ones, she agrees, signing herself up for a lifetime of witchcraft (and an icy-blonde new look). She's fully embraced her witchy ways at the Academy, which looks to continue into the next set of episodes. Along the way, though, she manages to speak with the spirit of her dead mortal mother, Diana, who reveals that she was stuck in limbo not for any malevolent reasons, but simply out of fear that she'd be leaving Sabrina alone. Having seen how Sabrina has a family and friends who love her, Diana is able to vanish.

Magic isn't the only thing brewing in Sabrina's life — there's a love triangle afoot. For most of the first season, Sabrina's one steady touchstone in her chaotic double life was her boyfriend, the sweet and loyal mortal Harvey Kinkle. But at the end of the season, after he finds out that her magic was real and that magic is what cost his brother's life, Harvey and Sabrina split up. In the Christmas special, the spirit of Sabrina's mother warns her against leading anyone else — especially a mortal — down the "Path of Night" with her, which seems to confirm for Sabrina that she's made the right choice in not trying to reunite with Harvey.

But that doesn't mean our favorite witch is destined to be alone. Now that Sabrina is fully involved in the witchy world, handsome warlock Nicholas Scratch is looking like a more viable option. We last saw him helping Sabrina by protecting Harvey during the season finale's most dangerous shenanigans. 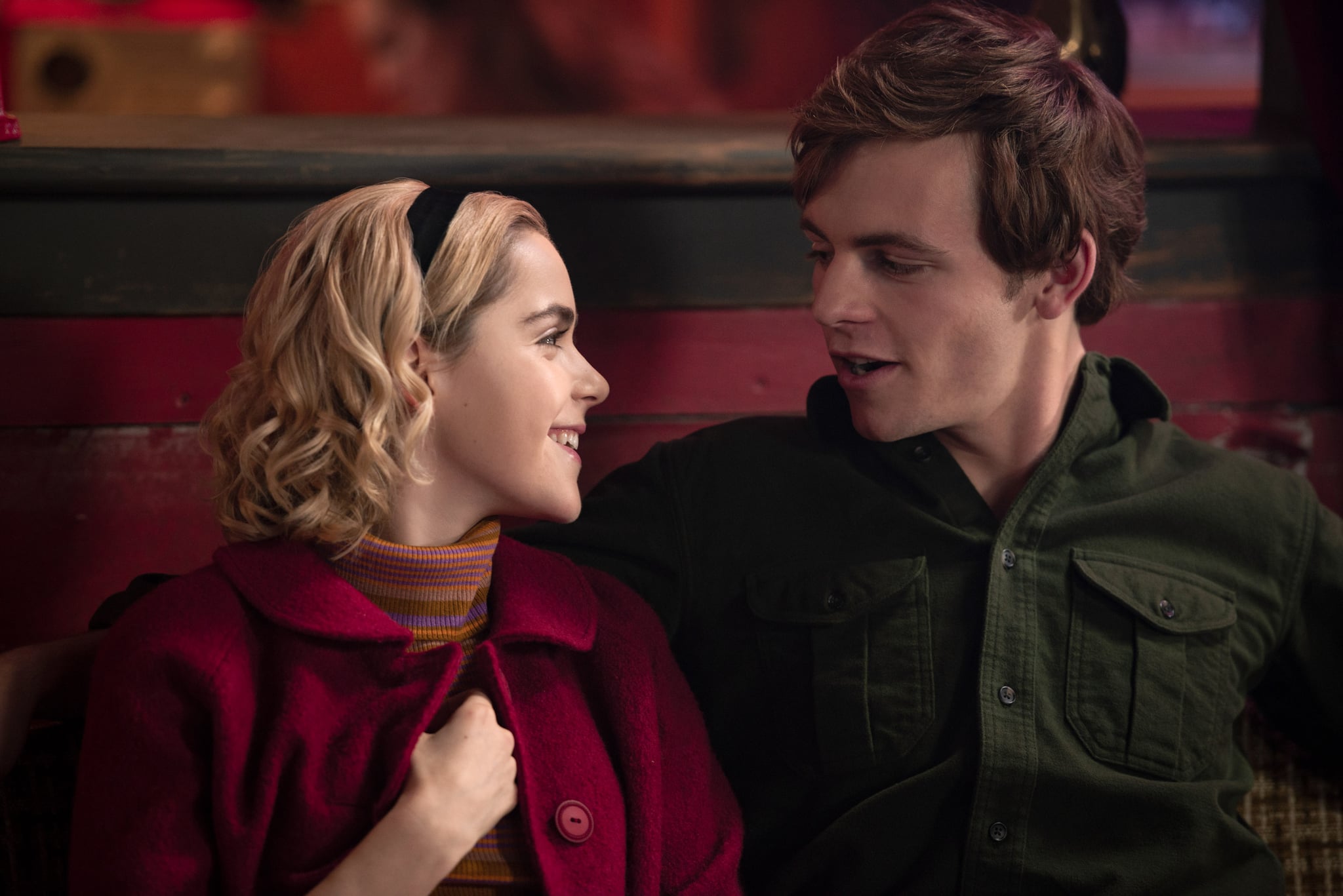 Lady Blackwood goes into labor, but dies after giving birth to a son. Zelda tells Father Blackwood that his son consumed his twin in the womb, but that turns out to be a lie: Lady Blackwood did give birth to a live baby girl as well, and Zelda kidnaps the daughter and names her Leticia. In the Christmas special, this comes back to haunt the Spellman witches when an older witch and her minions appear, demanding the baby. Sabrina tricks the witch by giving her an old teddy bear, enchanting it so that it appears to be baby Leticia.

After a season of wondering when they'd finally be brought in on the secret, Roz and Susie (along with Harvey) learn that Sabrina is a witch. So far, so good — their knowledge even saves Susie when Roz realizes that Susie's mall-Santa boss is actually a demon. Still, both friends have their own journeys still hanging in the balance: Roz's blindness and seer abilities have taken hold, while Susie is starting to find a comfortable gender identity. Both have been sucked into Sabrina's magical world, though, so it's anyone's guess as to what's next.

The Church of the Night Undergoes Changes

Upon the birth of his son, Father Blackwood takes the reins of power more firmly. He pushes his former favorite (and illegitimate daughter) Prudence aside and claims that his infant son will be his "true" heir. He rallies the boys of the Academy and tells them that it's time for men to hold the power in the Church of Night. Something tells us the Weird Sisters and the Spellmans might have something to say about that.

We'll see how all these storylines — and more — unfold when Chilling Adventures of Sabrina returns for its second set of episodes on April 5!