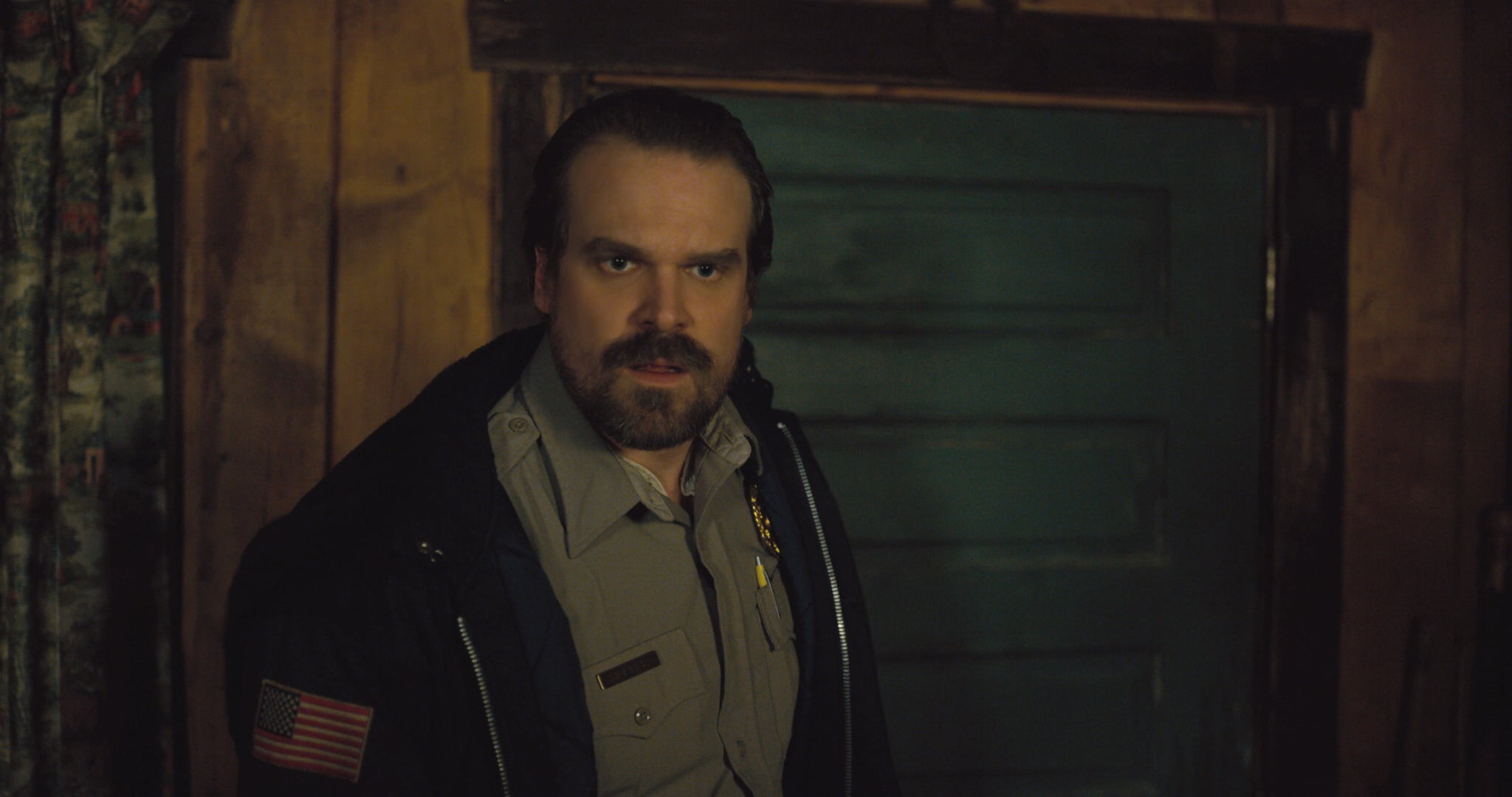 One of the highlights of Stranger Things season two is Hopper and Eleven's father-daughter bond. These two misfits find each other at the perfect moment, and it's clear that they're officially Hawkins' cutest family — especially after Hopper's house-cleaning dance. Still, the Netflix series doesn't answer all of the lingering questions from season one, like, how does Hopper know Eleven is alive in the first place? The season begins with the two settled into a routine, and it only shows snippets of how Hopper finds Eleven through flashbacks. Thankfully, those snippets are enough to figure out how Hopper realizes Eleven is out there and in need of his help.

Even though it isn't explicitly stated in season two, it seems Hopper realizes Eleven made it out of the Upside Down alive after she uses her telekinetic abilities to take a hunter's jacket. At that point, Eleven had been on her own for at least two or three days, which made her desperate enough to risk exposure if it meant staying warm. The man no doubt called the police after his bizarre run-in with a scary little girl in the forest. Given Eleven's unique abilities, Hopper would have realized immediately that the girl the man was describing was Eleven and set out to find her.

Season two is full of hints about Hopper's past, and one of the biggest revelations comes when he reveals to Eleven that the cabin they call home used to belong to his grandfather. Between that and the expert trap-setting, Hopper clearly has an outdoorsman past. After he realized that Eleven was alive, Hopper likely put his hunting skills to use in order to draw her out, namely by leaving food for her to find, signaling that she wasn't alone. It's unclear whether or not Hopper built the box in the woods or if it's an old survival cache box used by rangers to store food in case of emergencies, but either way, Hopper knew Eleven would be hungry. He also knew she loves Eggos, which would be a quick way to communicate to her that whoever was leaving the food knew her. Thanks to the hunter, Hopper also had a good idea of the vicinity Eleven was in, and these two things combined made it easier for him to find the superpowered tween.

Despite leaving most of how Hopper tracks down Eleven a mystery, Stranger Things does an excellent job of showing how these two characters come to trust and rely on each other. Clearly, neither one of them has an easy time opening up, and Hopper's fear that something would happen to Eleven if she leaves the cabin puts a strain on their family bonding. In fact, Hopper's other box — the one that doesn't contain Eggos — seems to be a bigger problem for Eleven. However, it also becomes the catalyst that leads her back home for good.

The fact that Hopper knows about Eleven's mother, but fails to share the information with her, sends the young woman on a quest that ultimately leads to her finding not only her mom, but also her "sister." Even though she finds two women with whom she shares a strong bond, Eleven chooses to return to Hawkins to protect her friends. Her journey gives her some sense of context about her past, as well as a drive to seek out the future she wants. That future is in Hawkins with Hopper, Mike, and her friends.

If Eleven had never stolen that jacket, Hopper may not have realized Eleven was still alive, and her story could have had a tragic ending. Fate seems to have brought these two together, and with any luck, even the Mind Flayer won't be able to tear Hopper and Eleven apart in Stranger Things season three.