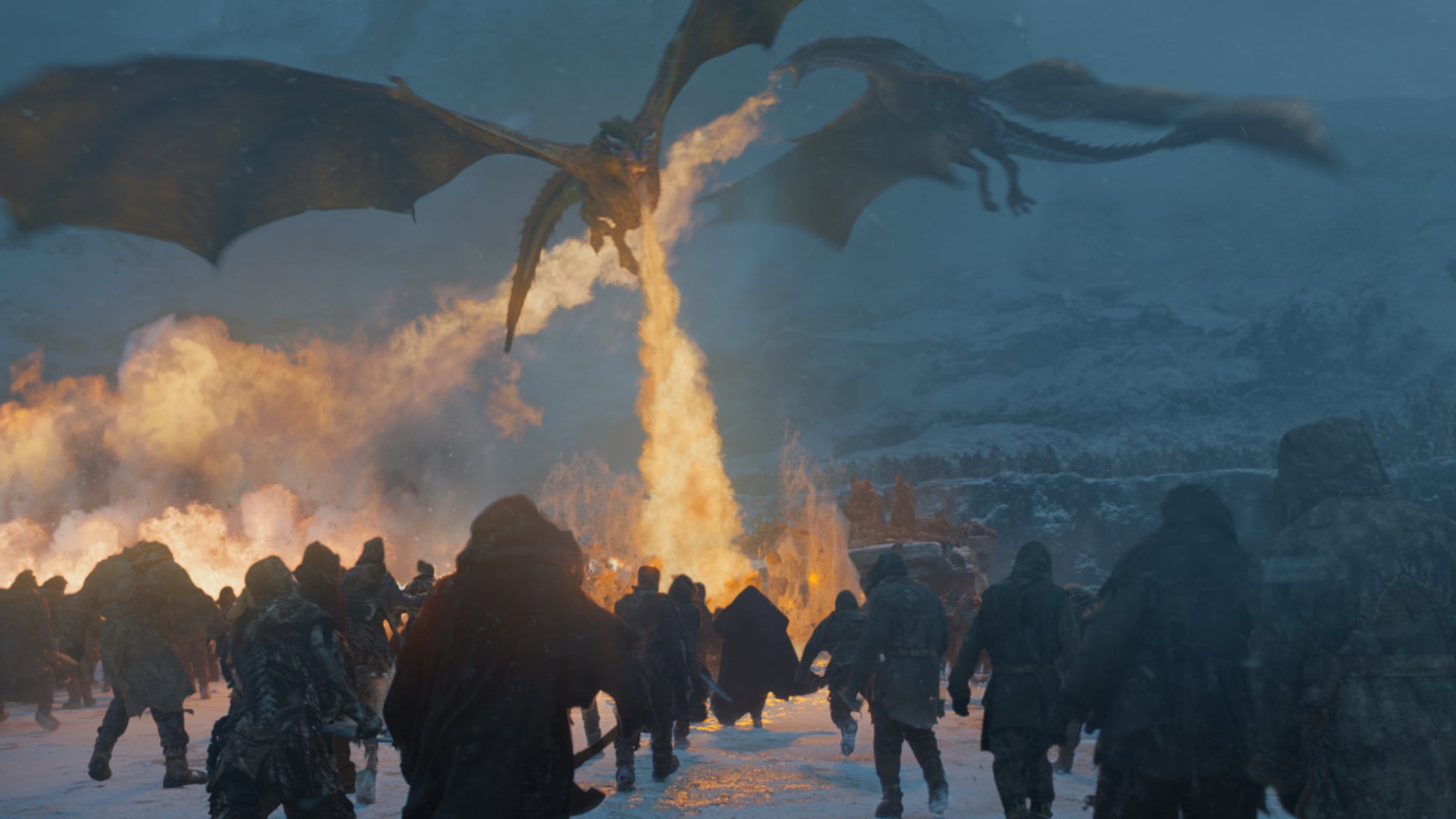 This season's promos — and Jon Snow and Ser Davos — weren't lying: the real war on Game of Thrones is not for the Iron Throne, but between the dead and the living. Now that the worst plan ever (i.e., Jon and his ragtag little gang facing off against a million White Walkers in order to bring one measly wight to King's Landing) has taken place, Daenerys suffers the loss of one of her dragons. Viserion dies when she flies beyond the Wall to rescue Jon and the boys; the Night King shoots him with some sort of powerful ice spear, then has him pulled out of the water. Tragic, yes, but what exactly does this mean for what's next on Game of Thrones?

Viserion Is Now a White Walker

Yes, after Drogon survives that giant dragon-killing spear that Qyburn invented, something even worse has happened to one of Daenerys's beloved dragons: Viserion has been reanimated as a White Walker dragon. Now, this means the Night King has an insane, powerful weapon in the undead dragon. Even though we're not sure if this version of Viserion will breathe ice or fire (or icy fire? My brain hurts), it's a definite that a wight/White Walker dragon is a fearsome foe. Dragons have always been Dany's trump card, but now that the White Walker army has an ice dragon, the playing field is certainly leveled.

Related:
55 Reactions We Had to Watching This Week's Absolutely Absurd Episode of Game of Thrones

While Jon profusely apologizes for his terrible plan, Daenerys assures him that she's not sorry since now she has seen the threat in person. This leads to a flurry of things that needed to happen — namely, that Jon recognizes Daenerys as his queen (and sparks totally fly between them). She's now in for the fight against the White Walkers and will set aside her race for the Iron Throne to deal with this much-bigger threat first.

This May Actually Unite the Warring Houses of Westeros

The whole reason Jon goes on that suicide mission is to bring back a White Walker to show Cersei. In next week's preview, Cersei and the heads of houses are together in King's Landing, but what if the proof of White Walkers is far more sinister, and instead of just the prisoner wight, the gathered crowd at King's Landing is treated to a viewing of an actual ice dragon? It seems far-fetched that that would happen . . . but so was the idea of an ice dragon. Even if Cersei doesn't see the dragon in person, Jon could assume the Night King turns Viserion into a White Walker and warn Cersei of it. She knows to be scared of live dragons, so an undead one should do the trick too.

Books
Obsessed With Lovecraft Country? Here Are 15 Books That Are Just as Thought-Provoking
by Camila Barbeito 9 hours ago