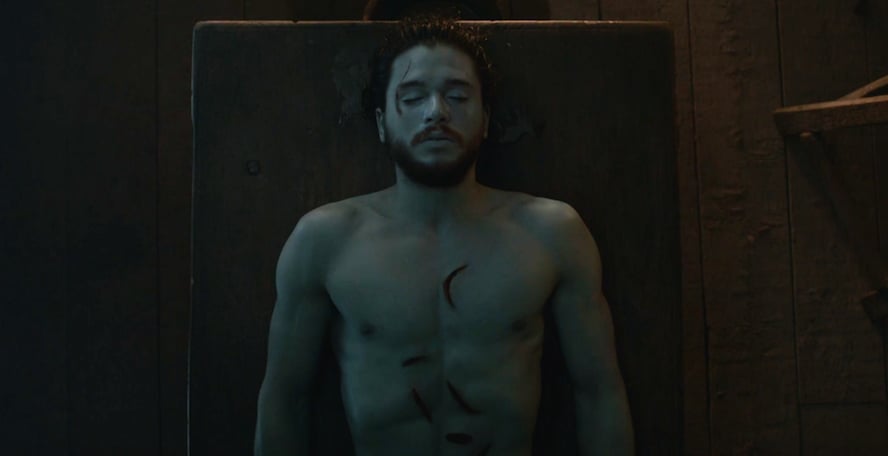 MAJOR spoilers for season six below!

The premiere episode, "The Red Woman," opens with Jon's lifeless body lying motionless in a pool of his own blood in the snow inside Castle Black, with a sign reading "traitor" nailed to a post beside him. Luckily, Ser Davos and other loyal members of the Night's Watch soon discover the treachery committed by Alliser Thorne, Bowen Marsh, Olly, and other officers and bring his body inside. Melisandre joins them and takes a thoughtful look at his very, very dead body. It kind of seems like there's a glint of "I'm totally going to resurrect this dude" in her eyes, but she's too busy suffering a major crisis of faith to do anything about it, and the episode ends with Jon still firmly a member of the undead.

In the second episode, "Home," Davos has finally had enough of Melisandre's moping and implores her to bring back Jon from the dead using the same magic that allowed her to give birth to a shadow-baby-assassin. Reluctantly (but luckily) she agrees, and proceeds to wash Jon's bloody corpse and throw pieces of his hair into the fire while chanting to R'hllor. It takes a few minutes, but finally Jon comes to, terrified and gasping for breath. There are still a lot of questions that need answering (Will Jon Snow still be a level-headed, good guy? Is he going to come back as a blood-thirsty, stone-hearted zombie? Will he lose memories of his previous life the way Beric Dondarrion did in the books?), but for now, let's all breathe a sigh of relief that Jon is finally back.