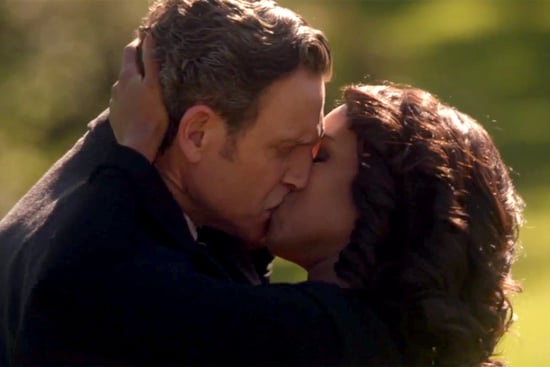 Olivia and Fitz share a love for the books, a will-they-or-won't-they situation that might be as iconic as those of Ross and Rachel from Friends or Sam and Diane from Cheers. Even when they're not together, there are sparks flying between them. Now that Scandal is coming to an end, will they finally get together for good? What started out as an affair during Fitz's first presidential campaign has bloomed into a never-ending love story. Here, we weigh the facts to determine whether or not the star-crossed lovers will end up together.

Olivia certainly has a more functional relationship with Fitz than she does with Jake. At least as functional as a relationship can be on Scandal. Jake, who, every now and then, shares a fling with Olivia, has proven that he's working for nobody except himself after he murders his wife Vanessa in the latest episode. But Jake's betrayal doesn't mean that Olivia and Fitz will have a smooth sailing romance. The political communications maven and the former president have made up and broken up more times than I can count, and I honestly don't even recall how many times the showrunners have used The Album Leaf's "The Light" to play with our heartstrings.

The defining word for Olivia and Fitz's relationship is precarious. Here's a rough timeline of their relationship. In the season one finale, Olivia resigns as the White House Communication Director shortly after Mellie finds out about their affair during Fitz's first term. After some more on-and-off romance, Olivia and Fitz finally become a nationally official couple in season five. But, of course, the relationship is short-lived. We do get a fantasy sequence of their marriage in an alternative universe, though.

Fast-forward to season six. There's not a lot of romance going on since Fitz is wrapping up his presidency and Olivia is campaigning hard for Mellie's presidential bid. Just before Fitz boards a plane to go home to Vermont, though, they share a passionate kiss together. They hook up again this season after Quinn's memorial but that turns out to be a part of the Gladiators' bigger plans to stage an intervention for Olivia, who's become a little bit power-hungry. Not the greatest premise for a romance if you ask me. But it does show that Fitz cares deeply about her.

The Last Time Olitz Hooks Up

After a nostalgic talk with Cyrus, Olivia initiates another hookup with Fitz in the latest episode. She drops by his place with a bottle of whiskey and some serious kisses. He reciprocates, the door closes, and we're all on the edge of our seats waiting to see what will come of this tryst by the time the season finale rolls around. Given their history together? Something's bound to go wrong. But we'll just have to wait and see.

What Shonda Rhimes Has to Say

In 2016, Shonda Rhimes, who's the executive producer of Scandal, had words to share with fans with regards to "Olitz" during a panel at the 33rd PaleyFest. "She (Olivia) has been on a journey since we started. It's interesting to me that it's a romance, that her primary story is a romance — that's what you've seen. But to me, her primary story has been discovering herself," Rhimes remarked.

It's been two years since Rhimes's comment, but it looks like Olivia is still in the process of finding herself. I don't think Olivia will find true happiness as Command of B-613 despite her recent highs with power. At the same time, Olivia and Fitz's dynamic feels too torrid and unstable to endure the test of time. It feels more true to the series' tone that the couple will share one last hurrah together and then go their separate ways on a bittersweet note. That said, I honestly wouldn't be mad to see her and Fitz make jam together in Vermont at the end of the series finale.