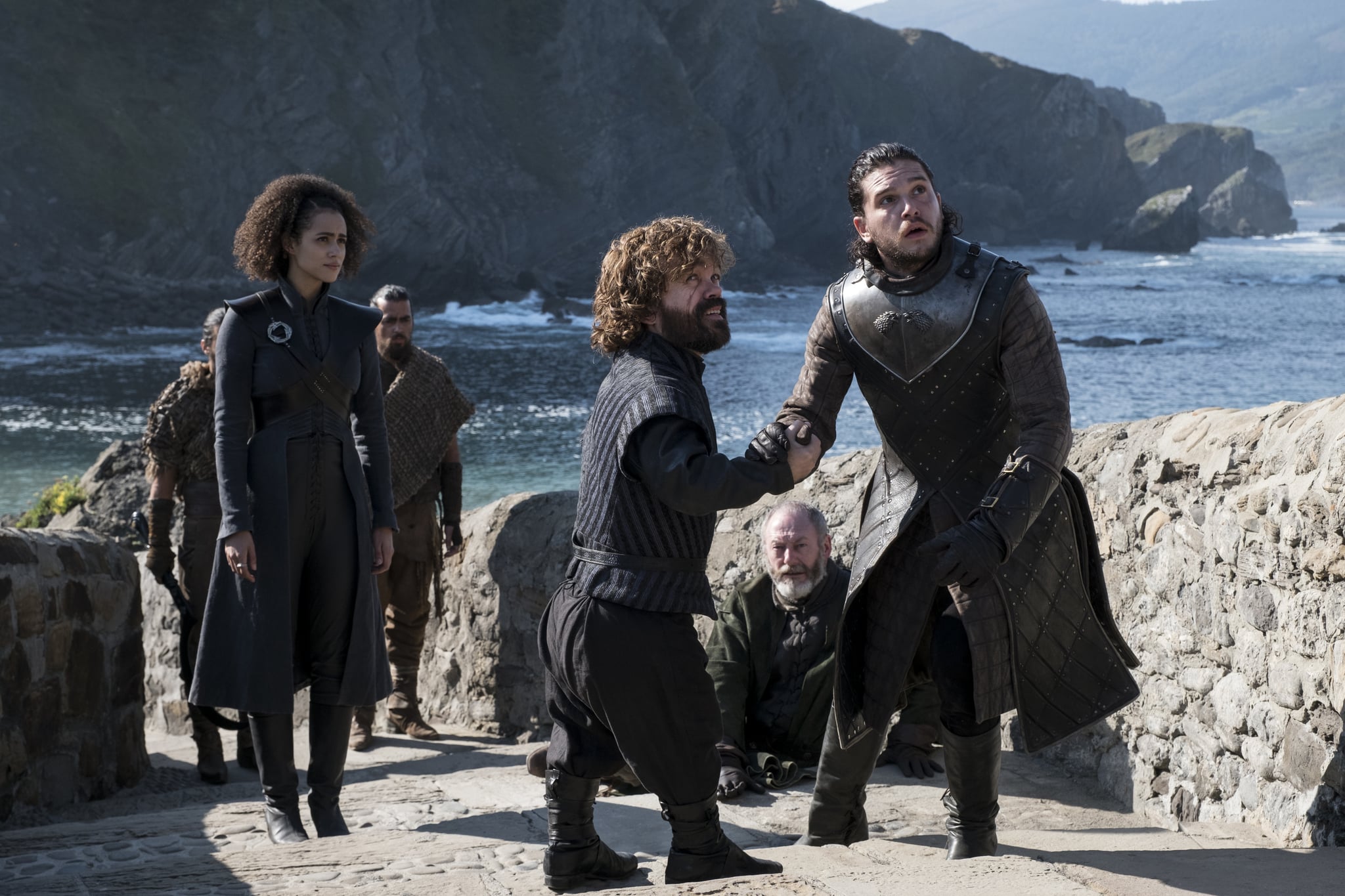 Game of Thrones fans squirmed in their seats during the third episode of the show's seventh season, knowing the truth behind Jon Snow's parentage as he and his peers — including Daenerys Targaryen — remain clueless. And what's worse, there were so many subtle references to Rhaegar Targaryen (Jon Snow's secret father) and Jon's true lineage throughout the episode.

"I am the last Targaryen, Jon Snow."

If you're scratching your head about these, don't worry; even the most hardcore fans would have a hard time catching all four of the hints in the episode! We've got the breakdown of each reference and why it's significant. Now all we're wondering is when Bran will break out of his Three-Eyed-Raven shell to let Jon know the truth about his parents.

When Jon and Ser Davos Seaworth first disembark at Dragonstone, they're greeted by a welcoming committee of Dothraki warriors, Tyrion Lannister, and Missandei. Jon and Tyrion, who go way back to season one as hesitant friends, use their long walk up to the castle to catch up on life . . . namely, whether Tyrion ever consummated his "sham" marriage to Jon's sister, Sansa. (The answer, of course, is no.) Over the course of this conversation, Jon reminds Tyrion: "I'm not a Stark." Immediately following this statement, Daenerys's dragons fly right overhead, causing Jon and Davos to instinctively hit the deck . . . much to the enjoyment of the folks who are used to massive, flying, reptilian monsters.

This statement and the timing of the dragons is significant, because it almost indicates that the dragons are trying to tell Jon something. Sure, he's not a Stark by name . . . but it's not because he's a bastard, but rather because he's a Targaryen! Perhaps Drogon, Rhaegal, and Viserion can sense the blood of the dragon within Jon's veins?

2. Not Exactly "The Last Targaryen"

During her impassioned demand for Jon to bend the knee, Daenerys takes the liberty of telling him: "I am the last Targaryen, Jon Snow." Cue every Game of Thrones fan quietly sipping their tea, because the rest of us know that she is, in fact, not . . . both Dany and Jon carry the Targaryen dynasty on their shoulders, even if they don't know it yet.

3. The Explanation for Rhaegal's Name

Once Daenerys takes a chill pill and manages to hold a normal (read: non-pissing-contest) conversation with Jon, they discuss their aims while overlooking her soaring dragons from a cliff. She gestures to Rhaegal and Viserion, telling Jon that she named them for the two brothers she lost, before asking him about the siblings that he lost in war. Little do Jon or Daenerys know that one of those two dead brothers, Rhaegar, is actually Jon's true father.

During this same cliffside conversation, Daenerys tells Jon: "We all enjoy what we are good at." Solemnly, and undoubtedly reminiscing about how he doesn't enjoy killing people in battle, Jon replies: "I don't."

This sentiment is especially significant when recalling what Ser Barristan Selmy tells Daenerys about her older brother, Rhaegar, during an earlier season. Though the eldest Targaryen sibling was skilled on the battlefield, Selmy tells Dany, he did not enjoy killing. Rather, he preferred making music and writing songs for his subjects.

So like his father, Jon Snow also does not enjoy the necessity of taking others' lives in battle; even without knowing his father, he has inherited one of Rhaegar's most defining character traits.