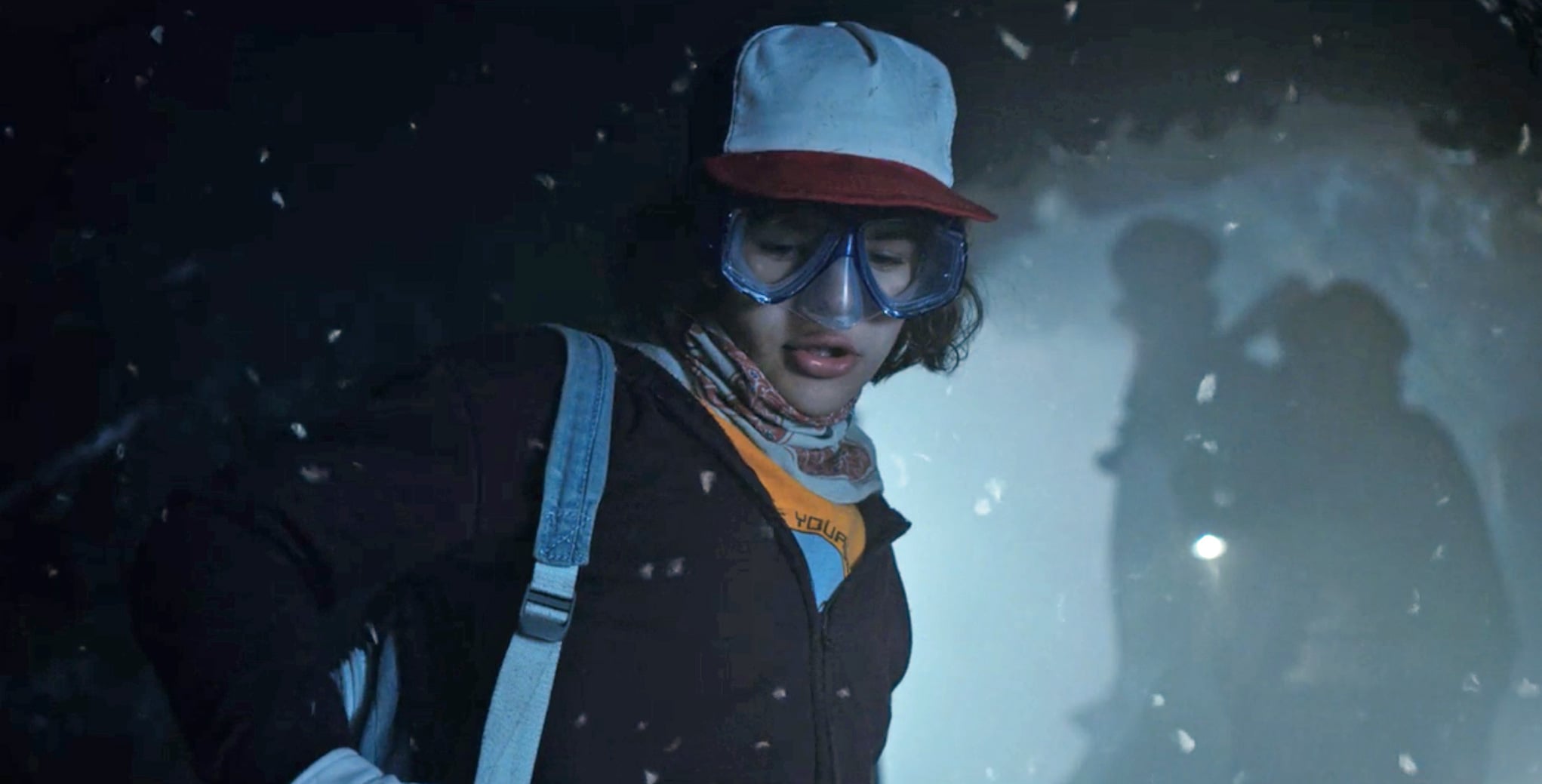 Stranger Things streamed back into our lives on Oct. 27, and we haven't stopped thinking about the show's wild season two finale since (we binged it all in one day, obviously). In addition to our questions about the fate of both Dr. Brenner and Yurtle the Turtle, there's one moment in episode nine that has us tripped up, and it has to do with both Dustin and Chief Jim Hopper.

Dustin, the curly-haired mother of Demogorgons who we all know and love, finally links up with Lucas, Mike, and Max after spending most of the season cultivating a meaningful bromance with Steve. Together, they race through the tunnels under Hawkins in an effort to lure the vicious pack of Demodogs away from the lab so that Eleven and Hopper can close the gate between our world and the Upside Down. The mission is mostly successful, but as they're making their way through the gross underground passages, Dustin gets sprayed in the face by one of the otherworldly tentacles covering the tunnel walls.

Related:
Why We Probably Haven't Seen the Last of the Smoke Monster on Stranger Things

He briefly freaks out and runs off, and the incident is never revisited. While it could be nothing other than an excuse to have another expletive-laced panic attack from one of the kids, we have reason to believe that moment will come back to bite Dustin in a big way. As we see earlier on in season two, Hopper also descends into the tunnels and gets sprayed in the face. Although Dustin seems unaffected after he breathes in the stuff that gets sprayed, Hopper passes out soon afterward. What exactly is in the substance they get sprayed with, and what does it mean for season three?

As we all know, the main character affected by the strange goings-on in Hawkins over the last two seasons has been Will Byers. Although we were blown away by young star Noah Schnapp's acting the second go-around (Those possession scenes toward the end? TERRIFYING.), having him be the reason everything is going to sh*t yet again in season three just wouldn't be believable, even in a town plagued by monsters. You know who could bring the Upside Down back into play, though? Dustin and Hopper. 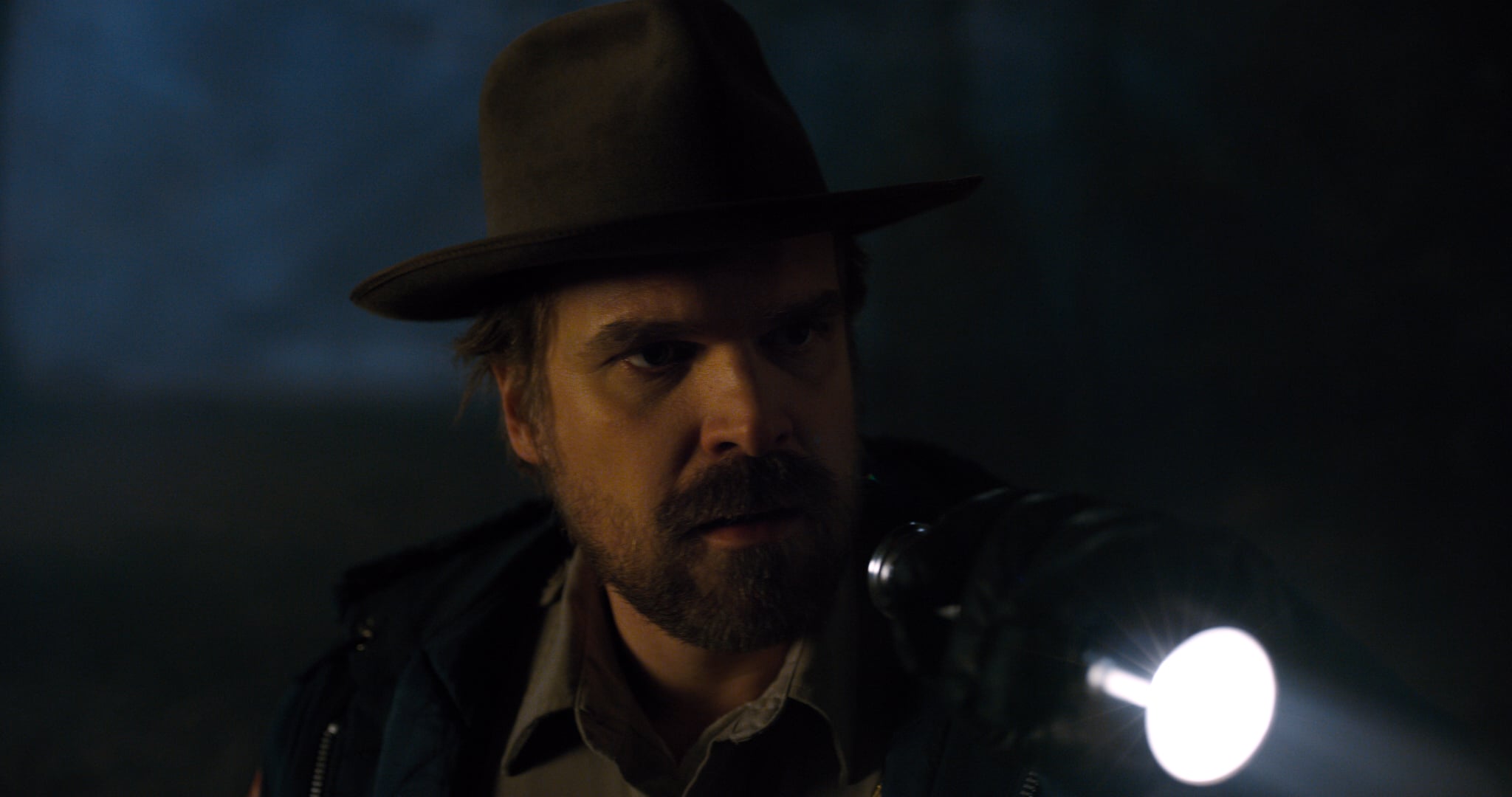 Since an eventual showdown between Eleven and the smoke monster (aka the "Mind Flayer") has been all but confirmed by cocreators Matt and Ross Duffer, we have a feeling the stuff sprayed at Dustin and Hopper will play a part in bridging the gap between these two worlds even with the gate closed. Clearly they're sprayed with something slightly different, since Hopper falls asleep and Dustin doesn't. But what if the point of the particles they inhale isn't to harm them? Maybe they're simply meant to stay inside of their human hosts so that the Mind Flayer can keep an eye on its new foes?

Think about it: the very last shot of "The Gate" is the Mind Flayer hovering over Hawkins Middle while all the major characters are inside enjoying the Snow Ball (except for Steve, aw). Specifically, Dustin is in the gym dancing with Nancy and Hopper is in the parking lot having a cute moment with Joyce. How would the Mind Flayer even know to be at the school? Didn't Eleven shut the gate and cut off the connection?

With Will effectively free from his possession by the evil entity, it's worth considering who else might have been seriously affected by their interactions with the Upside Down in season two. Hopper and Dustin seem OK on the outside, but they might be harboring something within themselves that they're not even aware of.

Netflix
Ratched: Everything You (Don't) Want to Know About Mildred's Incredibly Dark Past
by Hedy Phillips 7 hours ago

by Victoria Messina 43 seconds ago