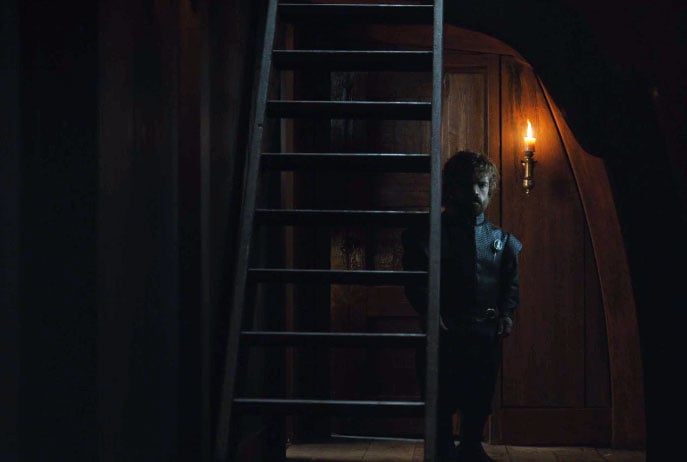 There have been a hell of a lot of shocking moments over the course of Game of Thrones' seventh season, but the jaw-dropping finale really takes things to another level. In addition to Littlefinger finally getting what he deserves and a zombified Viserion taking down the Wall, we're also treated to the highly anticipated, steamy-as-hell sex scene between Jon Snow and Daenerys Targaryen. Although plenty of people on Twitter freaked the f*ck out in happiness, there's one person who seems decidedly less thrilled by their newly consummated relationship: Tyrion Lannister.

When Jon goes into Dany's bedroom on the ship they're on headed North and they close the door, the camera cuts to Tyrion lurking outside the door in the hallway. The expression on his face is a very obvious mix of anger, frustration, and sadness. So, what's up with Tyrion? Well, he's madly in love with Daenerys. That's what.

Toward the end of season six, we get a glimpse of the romantic feelings Tyrion might be harboring for his boss when he shoots her a tender look, but it's not exactly made clear if he's fallen head over dragons for the Targaryen queen. In July, however, Peter Dinklage put all wondering to rest during an interview with TV Guide. "We'll deal with how much Daenerys can trust him [to stay on her side against the Lannisters]," he said. "But he's smitten with his employer. How good can he be at his job while having those feelings?"

While his upset expression outside Dany's door might also have been because he's worried her judgment will be clouded if she falls in love with Jon Snow (oops, too late), it's hard to blame Tyrion for being a little jealous. Here's hoping he can move past his feelings in season eight, because god knows they all have enough to deal with already without a love triangle entering the mix.