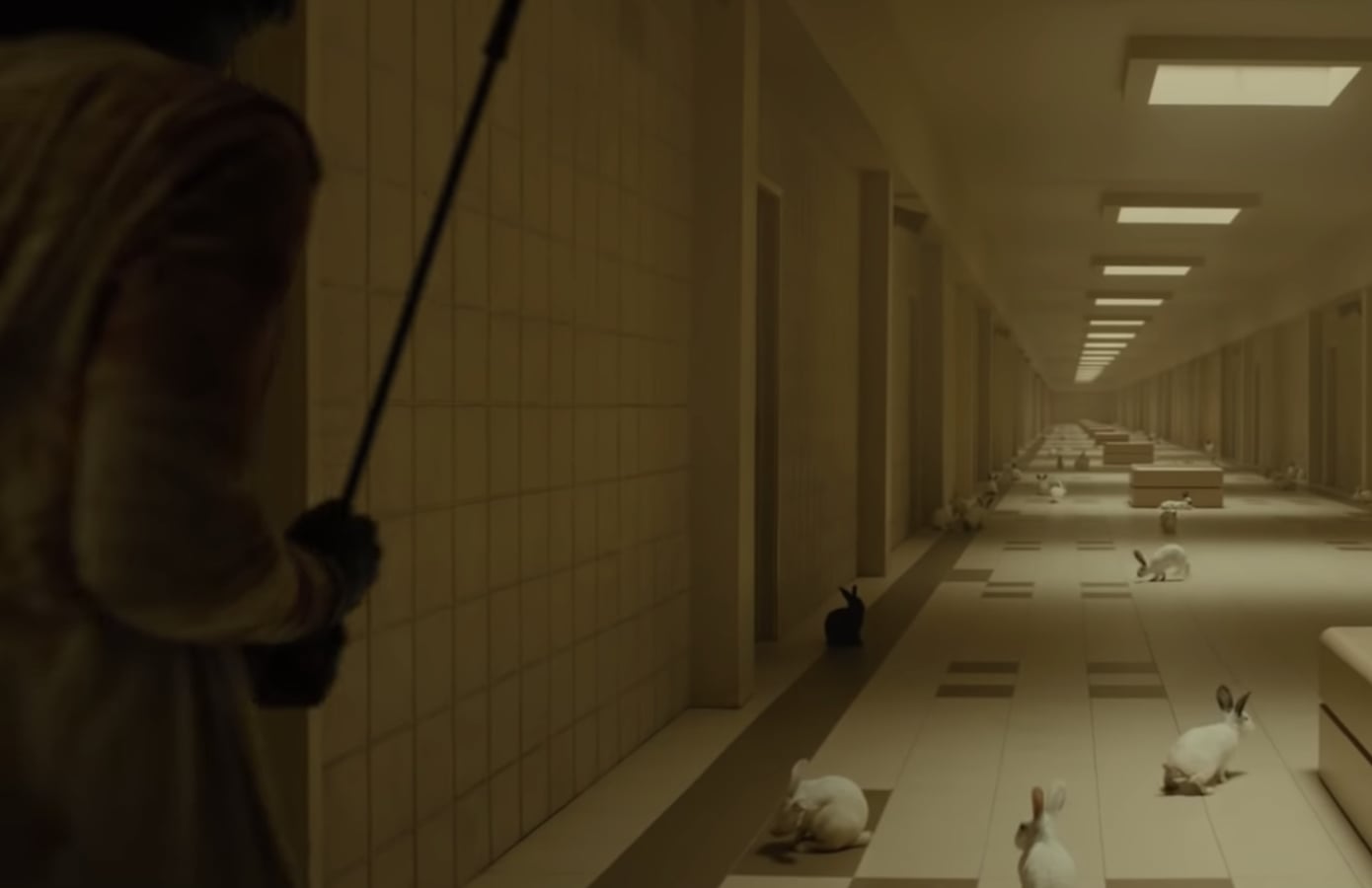 There's been a ton of discussion surrounding Jordan Peele's newest thriller, Us, due to its many Easter eggs and secret messages. One of the main talking points that has people racking their brains is the notable presence of rabbits throughout the film. Peele has previously said that he actually does have a fear of rabbits, and it doesn't help that their ears have a similar twofold appearance to scissors. In December, he told Entertainment Weekly, "I think rabbits and scissors, they're both scary things to me, and both inane things, so I love subverting and bringing out the scariness in things you wouldn't necessarily associate with that." He also told Rotten Tomatoes that rabbits look like sociopaths if you stare at them long enough (which is kind of hilarious and also provides some backstory for his cameo in the film).

Naturally, there are multiple meanings behind these furry beings in Us, so let's break down the main connotations.

Warning: major spoilers for Us ahead!

Food For the Tethered

This one is a bit more surface level. Adelaide's (Lupita Nyong'o) tethered half, Red, explains that after the government stopped making replicas of people, the clones were left alone to fend for themselves. They were forced to eat rabbits — uncooked, might I add — in order to survive. So the cute little bunnies you see hopping around when they're out of their cages? Yeah, that's just a constant reminder of all the pain and suffering the Tethered have endured over the decades.

Representation of the Tethered

Although the Tethered had to use the rabbits as food, it's also worth nothing that the animals share a connection with their fellow imprisoned humans. At the beginning of the movie, we see all of the hares locked up in cages (which are in rows of 11 — another hidden meaning!), but then they're free from captivity when the Tethered no longer occupy that underground space. They were all presumably set free from their restraints around the same time; the rabbits were able to roam around while the Tethered were able to initiate their rebellion.

Related:
Jordan Peele Has a Subtle, Nightmarish Cameo in Us

When young Adelaide (Madison Curry) wanders off to the house of mirrors at the Santa Cruz boardwalk, she and young Red find themselves going down their respective rabbit holes that eventually lead to their face-to-face meeting — and Adelaide's revealed kidnapping. Therefore, they have both been subjected to the experience of confinement, just like the rabbits.

Depiction of Vulnerability, Fertility, and a New Season

Rabbits have been known to represent multiple things, one being vulnerability. For so long, the Tethered were vulnerable and enslaved to their unknowing other halves. But when they finally wreak havoc on the outside world, their doppelgängers are the ones who become endangered and powerless. Rabbits are also associated with fertility, which could be a reminder of how Red was basically forced to give birth to Zora (Shahadi Wright Joseph) and Jason's (Evan Alex) evil twins because her life mirrored Adelaide's. Rabbits' correlation to springtime and the changing of seasons also directly relates to the Tethered and their eventual uprising.

The notion of random rabbit bevies taking over a large space isn't totally unfathomable, believe it or not. Peele hasn't yet commented on this, but there is a known island of rabbits off the coast of Japan that's tied to World War II. The land is called Ōkunoshima (nicknamed Usagi Jima, meaning "Rabbit Island"), and it was secretly used for chemical weapon testing and poison gas manufacturing during the war. Rabbits were initially brought to the island as test subjects (twisted, right?). During the occupation of Japan in the mid-1940s, Americans reportedly euthanized all of the lab rabbits. The current-day large population of bunnies that's taken over the island allegedly came from a group of rabbits that schoolchildren set free on the land in 1971. They were able to procreate without predators, which allowed them to completely take over Ōkunoshima. Hmmm . . . so the rabbits went from lab experiments to island rulers? THAT sounds familiar. (I'm looking at you, Tethered.)

Connection Between Adelaide/Red and Zora

OK, this is probably the wildest interpretation, but hang with me. The rabbit motif mixed with Peele's concept of duality might suggest that Zora could be the next Red, in some way, shape, or form. Peele has said that a rabbit is an "animal of duality" — cute and scary — with the brain of a sociopath (STILL funny). That's a pretty accurate description of Adelaide, who learned to blend in with the outside world and imitate/adopt emotions at a young age.

Zora doesn't seem to exhibit any signs of sociopathic behavior, but she is a little more withdrawn from people. A part of that can be attributed to her being in the moody early teen years, but I find it a little hard to believe that the top she's wearing with the word "Thỏ" — meaning "bunny" in Vietnamese — is simply another nod to rabbits. It could also mean that she genetically inherited some of Red's nonhuman qualities. It's no coincidence that they both killed the the Tyler sisters (Cali and Noelle Sheldon), and in a similar fashion: repeatedly and mercilessly hitting them with a staff-like item. There's a duality not only in the way that they killed the sisters but even in the fact that they both killed one identical twin.

It's also interesting how Adelaide's husband, Gabe (Winston Duke), looks at his wife a little suspiciously at the end, just as Jason does. Jason, after all, is the only one who sees his "mother" break character twice — when she kills the Tyler twin and is rabidly breathing, as well as when she murders her other half and lets out a slight, devilish laugh while he's still trapped in the locker. Gabe and Jason are a little mistrustful, and perhaps they have reason to be . . . who knows what Adelaide and maybe Zora are capable of now?

Watch out, everyone: we might see some mother-daughter villains if Peele decides to unleash a sequel.