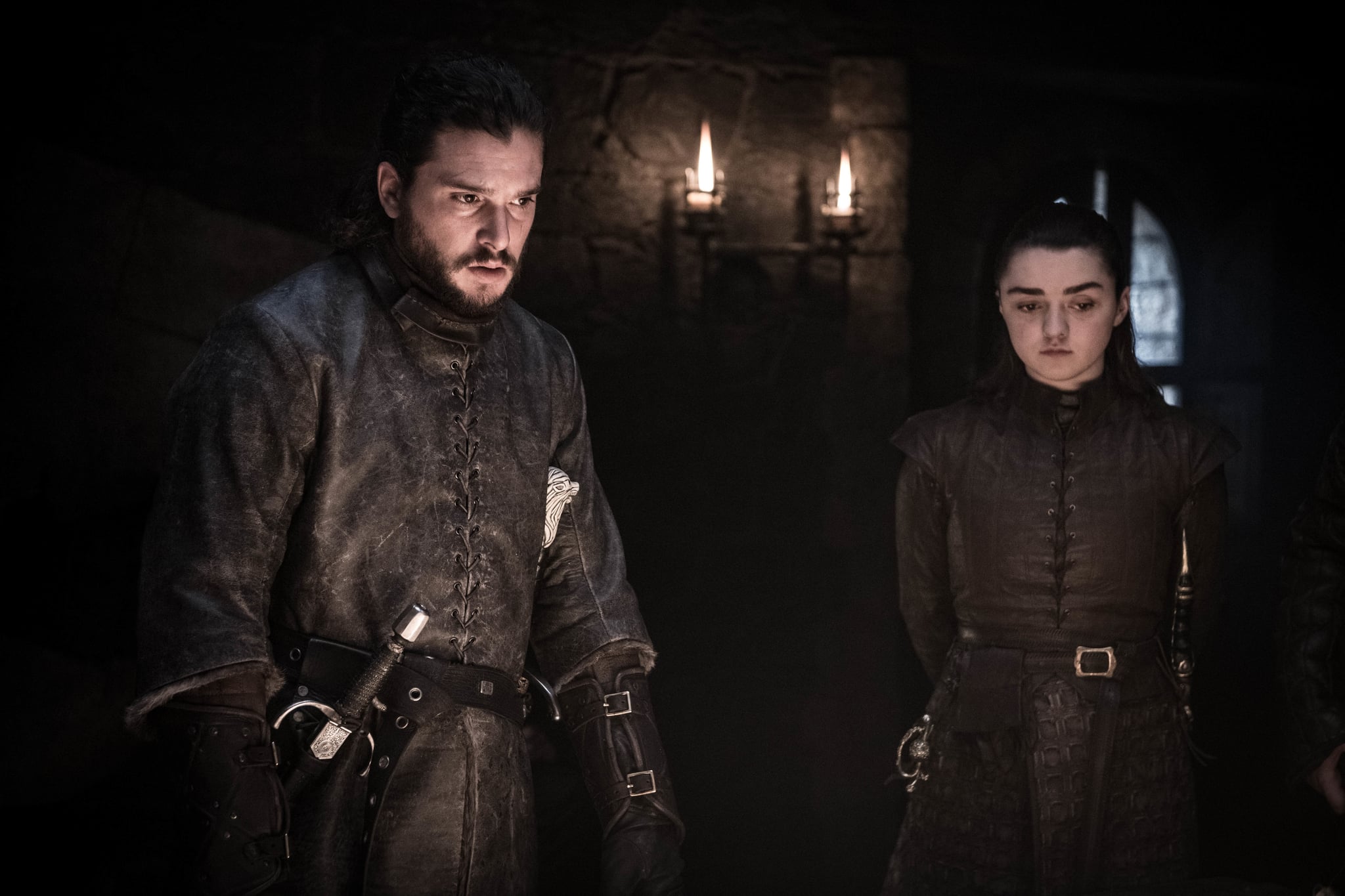 Game of Thrones is pulling out all the stops for its final set of episodes, with massive battles ahead and all sorts of character reunions and returns. In Sunday night's second episode of the season, a long-absent character finally reappeared — but not a character of the human kind. Jon's beloved direwolf pet, Ghost, appeared on screen for the first time in years! The shaggy white wolf was spotted in a scene where Jon and Sam are having a serious conversation about whether or not Jon has told Daenerys about last week's massive revelation (aka that Jon is actually a Targaryen — and Dany's biological nephew).

For the most part, Ghost has been absent on screen for a couple of seasons. In reality, it's most likely been a question of practicality: as Jon has been traveling around Westeros, there's no real story need to have his loyal direwolf companion with him, and it would cost a lot of money and time to create the CGI wolf for scenes where he's not really needed. In the world of the story, then, we can safely assume that Ghost has just been chilling out at Winterfell ever since he and Jon arrived back home.

Ghost first appeared at the very beginning of Game of Thrones, when the Stark children found a litter of direwolf puppies. At the time, there were exactly six pups, one for each of the Stark children. Ghost was found separately, the runt of the litter, and adopted by Jon, the illegitimate Stark. Since then, though, the Starks' direwolves have met some tragic fates, much like some of their owners. Lady, Sansa's direwolf, is killed on the orders of Cersei and Joffrey Baratheon for "attacking" Joffrey, while Robb's Grey Wind is murdered with him at the Red Wedding. Summer, who belonged to Bran, dies protecting Bran from wights, and Shaggydog, who belonged to young Rickon Stark, was murdered when Winterfell was under the power of the Boltons.

Currently, only Ghost and his sister Nymeria — Arya's direwolf, who she sent away to save her life — are still alive, and we're hoping we'll see more of Ghost at his master's side in this final batch of episodes!

Netflix
Christian Serratos Brings Selena, the Woman Behind the Legend, to the Small Screen
by Mekishana Pierre 1 hour ago

Grey's Anatomy
Another Beloved Grey's Anatomy Character Has Returned, and This One Really Broke Our Hearts
by Mekishana Pierre 14 hours ago

Zendaya
An Inside Look at the Style Moments to Come in Euphoria's "Rue: Part 1" Episode
by Sarah Wasilak 20 hours ago