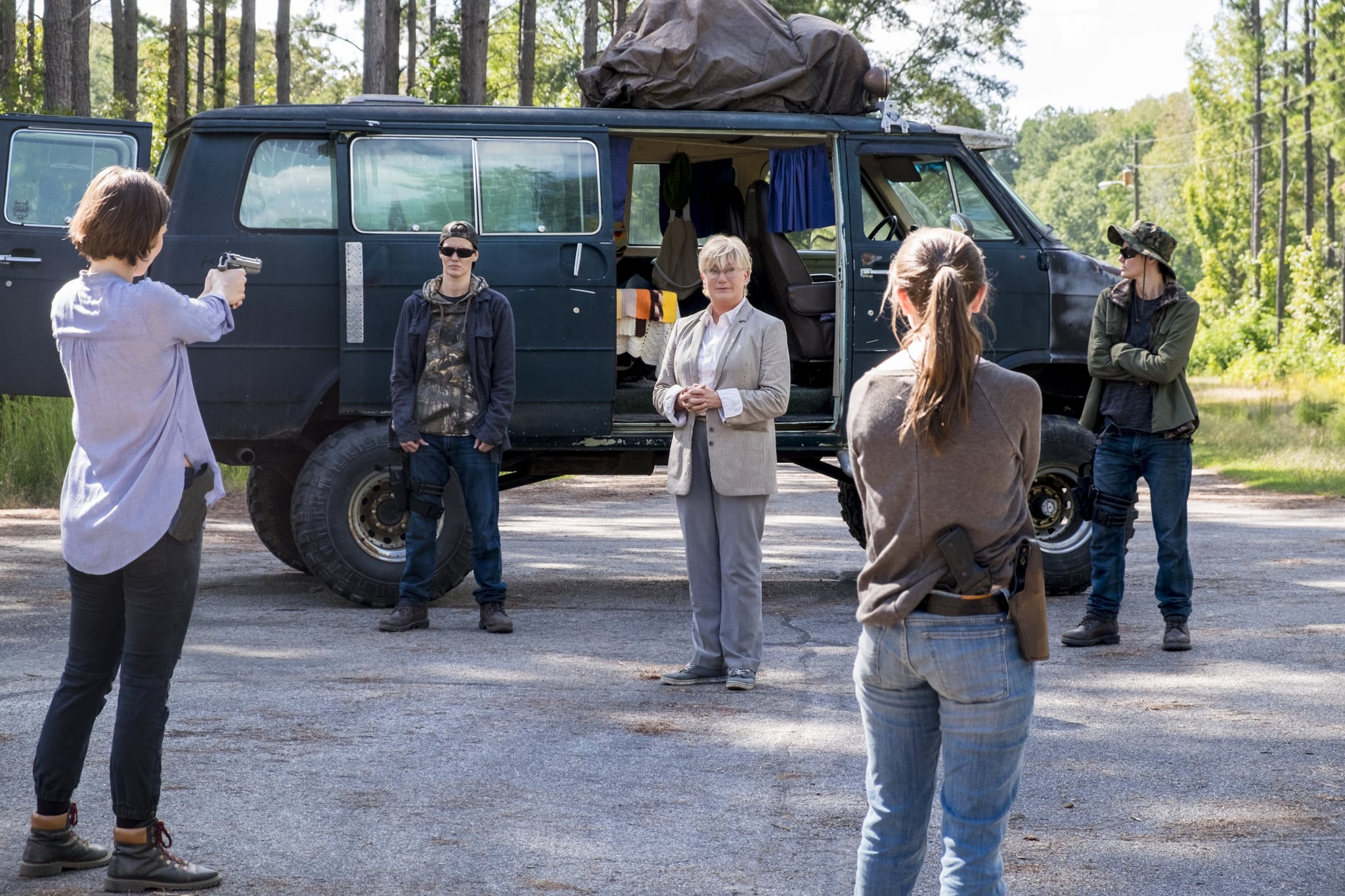 Spoilers below for the latest episode of The Walking Dead!

Just as fan-favorite characters leave The Walking Dead, new ones arrive to take their place. There's no telling whether or not the latest addition to the show, the enigmatic Georgie, will become a beloved fixture on the zombie drama or not, but one thing's for sure: she's interesting enough, and weird enough, to hold our attention.

The new character, played by Jayne Atkinson, ends up being the reason for the name of Sunday night's episode: "The Key." Maggie spots some empty crates left outside of Hilltop by an anonymous person, with only a note reading, "If you fill the crates with food or phonograph records, I will gladly exchange them for a key to your future." The key to the future, huh? It's cryptic and potentially dangerous, sure, but Maggie and Michonne eventually agree that it's worth checking out.

Maggie ends up coming face to face with the stranger (and her bodyguards, Hilda and Midge), who has short white-blond hair, wears glasses, and is wearing a remarkably spiffy blazer for it being the middle of the zombie apocalypse and all. She introduces herself as Georgie, and for anyone who's read the comics, it seems like she, Hilda, and Midge could be members of the Commonwealth community from the New World Order storyline.

Related:
Lauren Cohan Will Return For The Walking Dead Season 9, Despite Filming a New Show on ABC

Not much is known about the group of survivors since it's so new to the comics, but it boasts advanced equipment and the leader, Pamela Milton, looks physically similar to Georgie (the blond hair, the blazer). The introduction of this group could also be the answer to who was flying that helicopter Rick saw earlier on in season eight.

While we can't know if they're a part of the Commonwealth for sure, we do know that Georgie will be making at least one more appearance on the show. Maggie initially attempts to steal their food, but comes around by the end of "The Key" and gifts Georgie with some of Hilltop's record collection. Good thing she does, too, since Georgie then shares not only their food, but also an instruction manual that has handwritten notes on how to build silos, water mills, windmills, and other important structures (she transcribed the schematics from memory).

"Build this place up," the new stranger tells Maggie. "I want those crates filled when I get back."