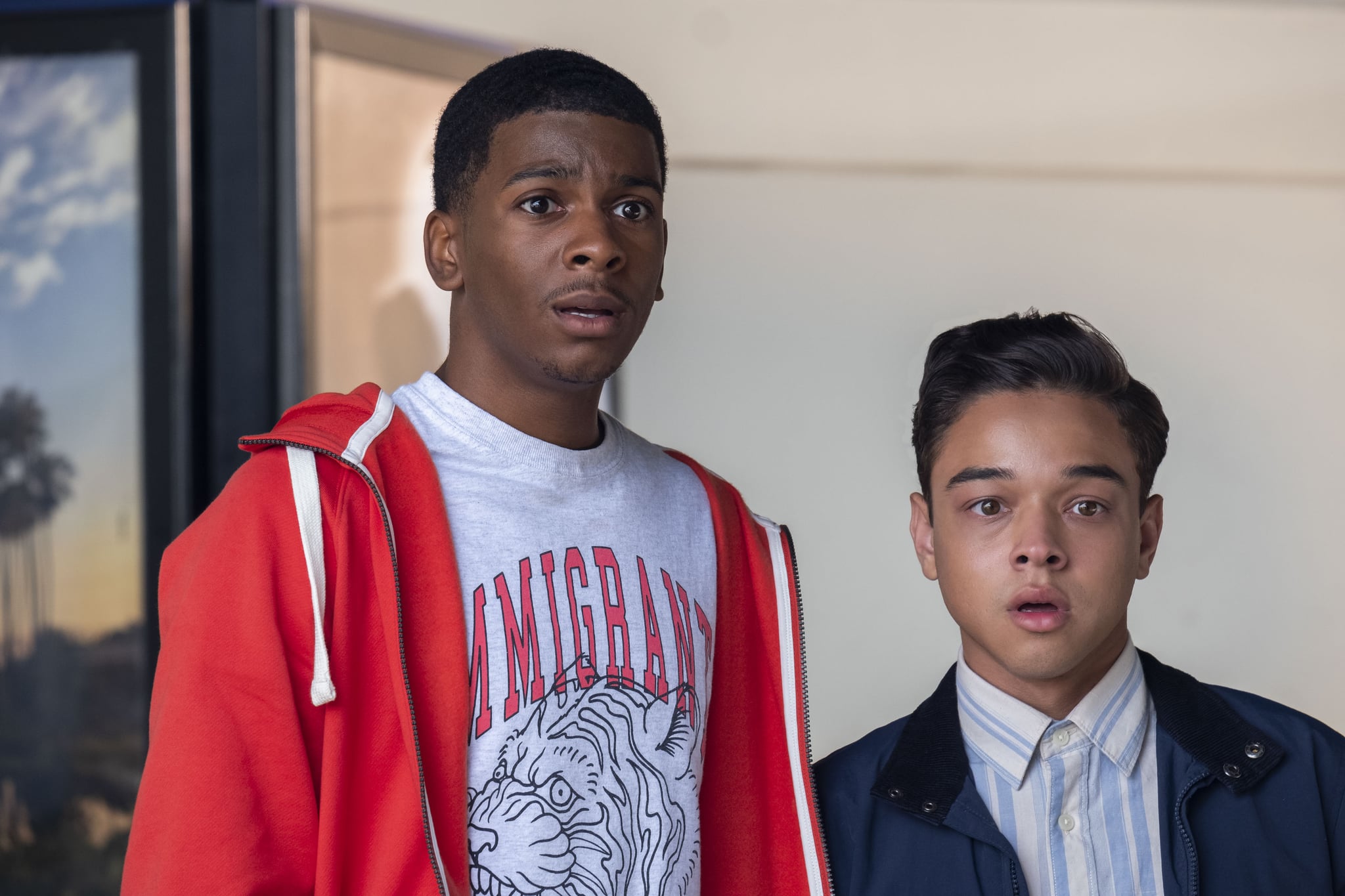 Warning: giant spoilers for On My Block season two below, so stop reading now if you haven't watched it yet!

On My Block's first season ends with such a devastating cliffhanger that we really never thought the show would be able to top it. But of course, when the clock runs out during season two's finale, Netflix's dramedy presents yet another shocking conclusion that had our jaws immediately on the floor. So, now that we finally know what happened to Olivia after last season's tragic shooting (and we spent an appropriate amount of time sobbing into our couch about it), the new mystery on the horizon is: who kidnaps Monse, Cesar, Jamal, and Ruby?

As a reminder, season two's final episode, "Chapter Twenty," neatly wraps up most of the lingering storylines: the gang war between the Santos and the Prophets comes to an end when Cesar and his older brother Oscar team up to double-cross their rivals, the Prophets; Monse and Cesar seem to be on their way to patching up their relationship despite Cesar's dalliance with his coworker; Ruby's older brother is no longer on the hook for fatherhood; and, of course, the Roller World money has been washed and disposed of (even if it's not in the way the group hoped it would be). That's what makes the final minute of season two so shocking.

After Cesar, Jamal, and Ruby tease Monse about her decision to go to a boarding school in New Hampshire, which they don't believe she'll actually follow through on, she storms off down the sidewalk without them, exclaiming, "I hope I never see any of you again." As she's mumbling to herself about telling off her friends, we see an unmarked gray van pull up alongside the guys, where a group of masked men (or women? It's impossible to tell) hop out, put bags over their heads, and drag them inside the van. Monse, oblivious to what just happened behind her, turns around a few seconds too late to see an empty sidewalk. Just as she's about to huff and puff even more, she's dragged off screen by the same people and tossed into the van.

It's an interesting development, since it 1.) comes out of nowhere, and 2.) doesn't seem to have an easy answer as to who it might be. Let's get to theorizing, shall we? Did the Prophets Kidnap Them?

This seems like the most obvious answer, which also makes us think it's the least likely to actually be true. Since the war with the Prophets seems to be over once and for all after Cesar and Oscar's plan land the entire gang in prison, it really feels like the conflict between the Santos and the Prophets will stop being a major part of the series (at least to the scale that it is in season two). But could there be a few members of the gang still roaming the streets, looking for revenge? It could even be the Prophets' loved ones acting in retaliation, like Latrelle's girlfriend or other family members.

Did a New Gang Kidnap Them?

Like we said before, the Santos vs. Prophets conflict appears to be at an end. With the Prophets' territory up for grabs, perhaps another gang is going to try to move in and stir up drama in season three. It wouldn't be hard to figure out that Cesar is Oscar's little brother, so a new gang could be attempting to send Oscar a message.

Related:
Latrelle Is an Important Part of On My Block Season 2 — Meet the Actor Who Plays Him

Did Chivo (or Someone Else Connected to the Roller World Money) Kidnap Them?

A key season two plot line revolves around Jamal's need to wash the Roller World money and trying to figure out a way to do so without getting caught. Luckily, with Monse, Ruby, and Jasmine's help, he's able to pull off a scam involving a money transferring service in their area called Money Bunny. But as Chivo — and a few other people in the neighborhood — tell Jamal, the money isn't his to wash. As we hear in both seasons, the Roller World money technically belongs to the Santos, since older, long-dead members of the gang were the ones to find and bury it in the first place.

Perhaps Chivo, a Santos alum, decided getting Juanita (his beloved female gnome) (truly, what even IS this show) wasn't a good enough deal? He does have a pretty sick sense of humor. Or what if his buddies that he claims are dead aren't actually dead? What if they've been in hiding (or living it up on some island) all this time, and they're just metaphorically dead to Chivo? And now they've come out of hiding to claim what's theirs? Plus Cuchillos, the oft-mentioned but never-seen Santos boss, is apparently still kicking around somewhere and could want a meeting with Cesar to chat about what went down. If so, the people in the van could be henchmen bringing Monse, Jamal, Ruby, and Cesar to Cuchillos to give them a talking to.

Did Someone From Money Bunny Kidnap Them?

This seems unlikely, but hear us out — what if the owner of the Money Bunny locations in South Central figures out that they've been had by a bunch of teenagers and decides to take some old-school revenge rather than going to the police? Is there a secret Money Bunny mob we don't know about?!

Is Someone Just Playing a Joke on Them?

As shocking as the kidnapping is, we also have to point out that the tone of the entire scene is more lighthearted than it is an emotional gut punch. It kind of, sort of doesn't feel like they're in any real danger, right? When you compare it to the tone of last season's big twist, when Ruby and Olivia are bleeding out in the backyard, they couldn't be more different. Sure, Olivia and Ruby's lives were in immediate peril, but getting yanked off the street and thrown into a sketchy van isn't exactly a picnic, either. Maybe it's Ruby or Cesar's older brothers trying to play a prank on them? We personally like to think Jasmine is behind it, having finally snapped after one too many of Monse's outfits.

Image Source: Netflix
On My BlockTVTheories