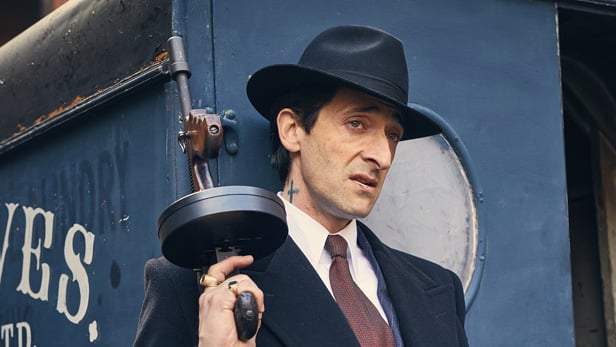 When it comes to Peaky Blinders guest stars, we didn't think anything could beat Tom Hardy's deranged cockney gangster, Alfie Solomons, who steals every scene he's in during seasons two and three. But from the moment Luca Changretta makes his first appearance in season four, gleefully confirming that his trip to the UK to seek revenge against the Shelby family is "pleasure," it's clear we were wrong.

There's a reason the cult crime drama attracts A-list stars, and Oscar-winning actor Adrien Brody is just the latest in a long line of recognizable faces to hit the streets of Small Heath. The appeal of Peaky Blinders is obvious; not only does showrunner Steven Knight create one of the coolest worlds on TV with his stylized 1920s Birmingham, but he then allows stars to live out their bad-guy fantasies within it. It's no surprise that Brody saw this as the perfect opportunity to step away from his more whimsical roles in films like Midnight in Paris and The Grand Budapest Hotel and make his mark on the small screen.

Related:
The New Girl in Peaky Blinders Is Based on a Real-Life Feminist Hero

As Luca, Brody is a mobster straight out of the Marlon Brando school of mumbling. It's a world away from the tortured performance in The Pianist that won him his Oscar in 2003. Luca is a well-dressed Italian American with a thirst for blood who knows exactly how to push Tommy's buttons, and he's taken no time in hitting the Shelby family where it hurts. Brody clearly studied Tom Hardy's performance for tips on just how far he could go with this character. The answer: there's no such thing as too far.

The best news is that we might just see Luca and Alfie battling it out before the series ends. We know from the trailer that Hardy is returning later in the series, so we're crossing our fingers that we'll get the chance to see the pair of them face off, with Cillian Murphy's Tommy right there in the middle. Surely having three such powerful characters together is an opportunity Steven Knight simply can't pass up?