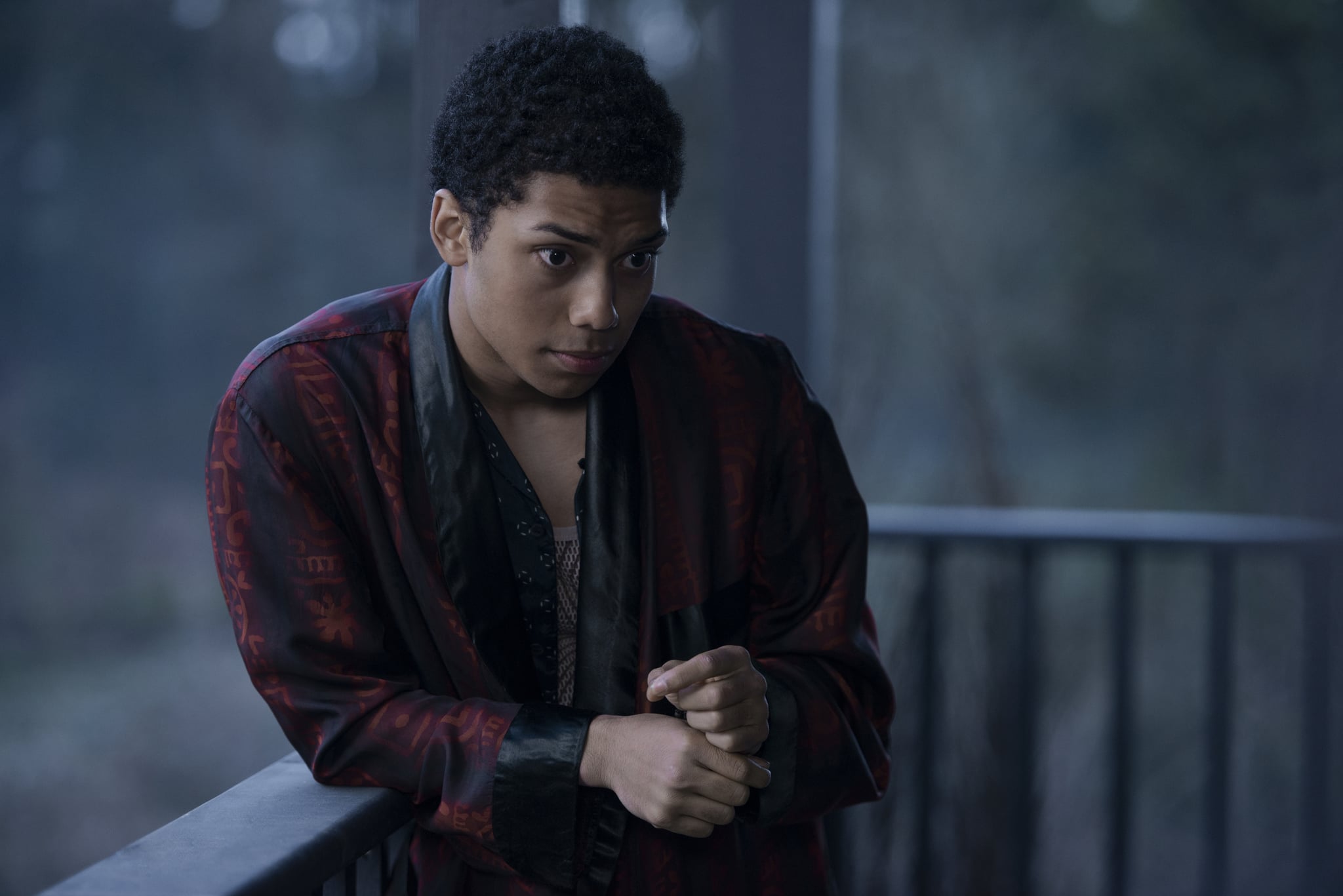 There are a number of questions that pop up throughout the first season of Chilling Adventures of Sabrina. Like, for instance, just how big is Sabrina's collection of headbands? And where might one find a cigarette fork like Aunt Zelda's? Also, how come Father Blackwood's nails are longer and healthier than mine will ever be? While those questions will likely go unanswered — I'll just have to assume Father Blackwood eats a lot of arugula — there is another mystery that was eating at me throughout the entirety of season one of the spooky new Netflix series: why can't Ambrose leave the Spellmans' home?

It's made clear earlier on that Ambrose is on permanent house arrest in the funeral home, as well as its front- and backyard. It's not until the back half of the season, when Ambrose's frustration at being stuck inside all the time because of his new relationship with a cute warlock, that the answer to why he got locked up in the first place really starts to reveal itself.

Warning: light spoilers for Chilling Adventures of Sabrina below!

While sitting down with Father Blackwood to discuss his sentence, Ambrose opens up about the path that led him there. Apparently his father was killed by witch hunters when he was a kid, so he drifted from university to university, doing incredible things like "magic with Houdini" and "painting with expressionists" in search of a father figure. Eventually he met someone who fit that role, who Ambrose says thought of himself as "a young Crowley" (likely a reference to British occultist Aleister Crowley). This unknown mentor coerced Ambrose into helping him pull off a plot to blow up the Vatican.

Related:
We're Finally Getting a Riverdale and Chilling Adventures of Sabrina Crossover

The plan failed, but only Ambrose was caught by the witch's council at the time. When they pressed Ambrose to give up his conspirators, he refused; that's when they sentenced him to house arrest, which he's been living out for decades ever since.

Father Blackwood listens to Ambrose's story and offers him a deal: if he gives up the names of the people involved in the plot now, he'll lift his sentence. Despite being utterly miserable with his existence, Ambrose still refuses; he just can't bring himself to sully his integrity. Fortunately, that's exactly what Blackwood was hoping to hear. The High Priest commends Ambrose for sticking to his guns and offers him a position at the Academy of the Unseen Arts. What's more is that he promises to speak to the witch's council, in hopes of getting Ambrose's sentence cleared for good.

Related:
What Does Miss Wardwell Want on Chilling Adventures of Sabrina? Her Motives Are Pretty Twisted

By the end of the season, Ambrose's punishment hasn't been totally erased, but he's able to seemingly walk through much of Greendale freely. He's seen traipsing through the woods with his boyfriend, helping Sabrina at her mortal high school, and more. We'll have to wait to find out if his sentence will be lifted entirely in season two and the identity of his mysterious mentor. Luckily we have plenty of other witch-themed stories to keep us busy!

Netflix
"Selling Sunset": The Cast's Friendships Behind the Scenes
by Chanel Vargas 3 hours ago