Harrison opened up about this and more with Extra TV the day after the taping, candidly revealing juicy details about what went down once the cameras stopped rolling, why Peter apparently reached out to Hannah Brown following his engagement, and how much the Kardashians grilled him during their post-finale FaceTime session. Oh, and he also has some thoughts about the "incestuous" nature of casting people for The Bachelor and The Bachelorette as it relates to one particular contestant on Clare Crawley's upcoming season. Get your mug(s) ready, and enjoy all the piping-hot tea ahead.

Chris Harrison on What It Was Like Hosting the Live Finale

"What I did not see coming was Barb. I mean, how could you? I just did not think she was going to go to that level . . . it went south. I've never been more uncomfortable. It was like being at a horrible Thanksgiving dinner and everybody airing their dirty laundry. It was one of those things, like, I shouldn't be here, and we shouldn't be here. Look, I got the first comment, but I thought OK, we're going to pull back now . . . but it just got worse, and they went deeper and deeper."

Chris Harrison on What Went Down After the Finale Taping

"Barb and Peter Sr. . . . went out one way, and Peter and Madison went out the other. Peter was visibly upset, clearly, on a lot of levels. He felt a little ambushed, he felt upset, he felt protective over Madison. I half expected to go to my house — because we're neighbors actually — and see him with all his stuff sitting on my porch."

Related:
The Bachelor: Peter's Mom Revealed Some Important Info the Producers Left Out

"Will their relationship work? Look, 90 percent don't, so it's easy to say they're not gonna work. But do you need to be the one that said, 'I told you so'? If you think they're gonna fail, then why not just let them fail and then you can just say, 'Hey, next time let's do a little better than that.'"

Chris Harrison on Whether Peter and Madison Will Last

"Are they gonna find a happy medium? Again, that's for them to decide."

"They have this 'love conquers all' attitude. That's kind of a glamorous statement to say that you see in a movie. Love doesn't conquer all because first you have to be in love and you have to have this connection and teamwork, and then love can fight through things as a team, but it won't fix this big divide that you have. If she's going to stick to her devout religious beliefs, then God bless her in that. But that's not Peter. Are they gonna find a happy medium? Again, that's for them to decide."

"They really are lovely people. I know people are just going to destroy Peter or destroy Madison or destroy Barb. Just remember these are human beings, and they really just aired their laundry in front of us last night, which I praise them for and I'm horrified for."

"What a boss she was! She kind of took everybody to school last night. What was her line, where she said, 'If you want to be with a woman, you need to be a man first.' If that's not a bumper sticker or on a t-shirt, it should be."

"I haven't talked to him, but my guess is that he just reached out just to say, 'Hey, just wanna be up front with you. This is happening, I am engaged, so you're not surprised by this.' I do respect that because we do look out for each other on this show in those regards. It probably seemed worse than it was."

"She was definitely on the short list, for sure. It was a no-brainer because of what happened on her show, because it didn't work out. [She's] very beloved. She makes great TV. I know it doesn't make a lot of sense to have a lot of people on a short list. There's girls from this season: the Hannah Anns, the Madisons, the Kelleys. It really does run the gamut. And then we start looking at past seasons, and then we start looking at casting of people you don't even know. Then there's maybe the celebrity route. We always kind of throw it all against the wall to see what sticks. It's an ongoing debate. Every season is like that." 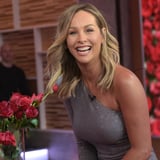 "She's never given up, and I like the fact that she left the limelight and she's been taking care of her family and just living her life. She's older. Proud, strong, independent woman. I feel like the timing is perfect for someone like this."

Chris Harrison on How Tyler Cameron's Roommate, Matt James, Is on Clare's Season

"This does get a little incestuous at times. We got Hannah Ann because of Hannah G. We're gonna take a break from Laurens and Hannahs for a while. We often hear about people from our own family. They'll say, 'Hey, I have a great guy.'"

"It's kind of beyond floating it. I think it's actually going to happen. We're casting, and we'll see how it all goes. Maybe this isn't the best time to do all this, sadly. We're looking 65 and above-ish. I think we're gonna have to shoot much earlier. I think we'll be done about 4:30. I'm gonna love this! We're gonna have our SPAM and tapioca, we're done by 4:30."

Related:
Meet the Aspiring Musicians Hoping to Find Love on The Bachelor: Listen to Your Heart

Chris Harrison on the New Musical Spinoff Series, Listen to Your Heart

"It's A Star Is Born meets Bachelor in Paradise. It's single men and women who are musically inclined from all kind of walks of life. We brought it all together, and it's people who don't know each other. It works. The show is so frickin' good."

Chris Harrison on FaceTiming With the Kardashians After the Finale

"There were a lot of Kardashians in the room. I'm good friends with Kris [Jenner] so I got a call, and I was passed around from Kardashian to Kardashian. They were hammering me with questions. They love reality TV like everybody else. They each throw each other under the bus of who's gonna be the Bachelorette. I tell them the door is always open if Kendall wants to be the Bachelorette."

Netflix
Blood & Water: The Actor Who Plays Sam Is New to the Show and the Industry
by Simrin Purhar 1 hour ago

by Sarah Wasilak 44 minutes ago