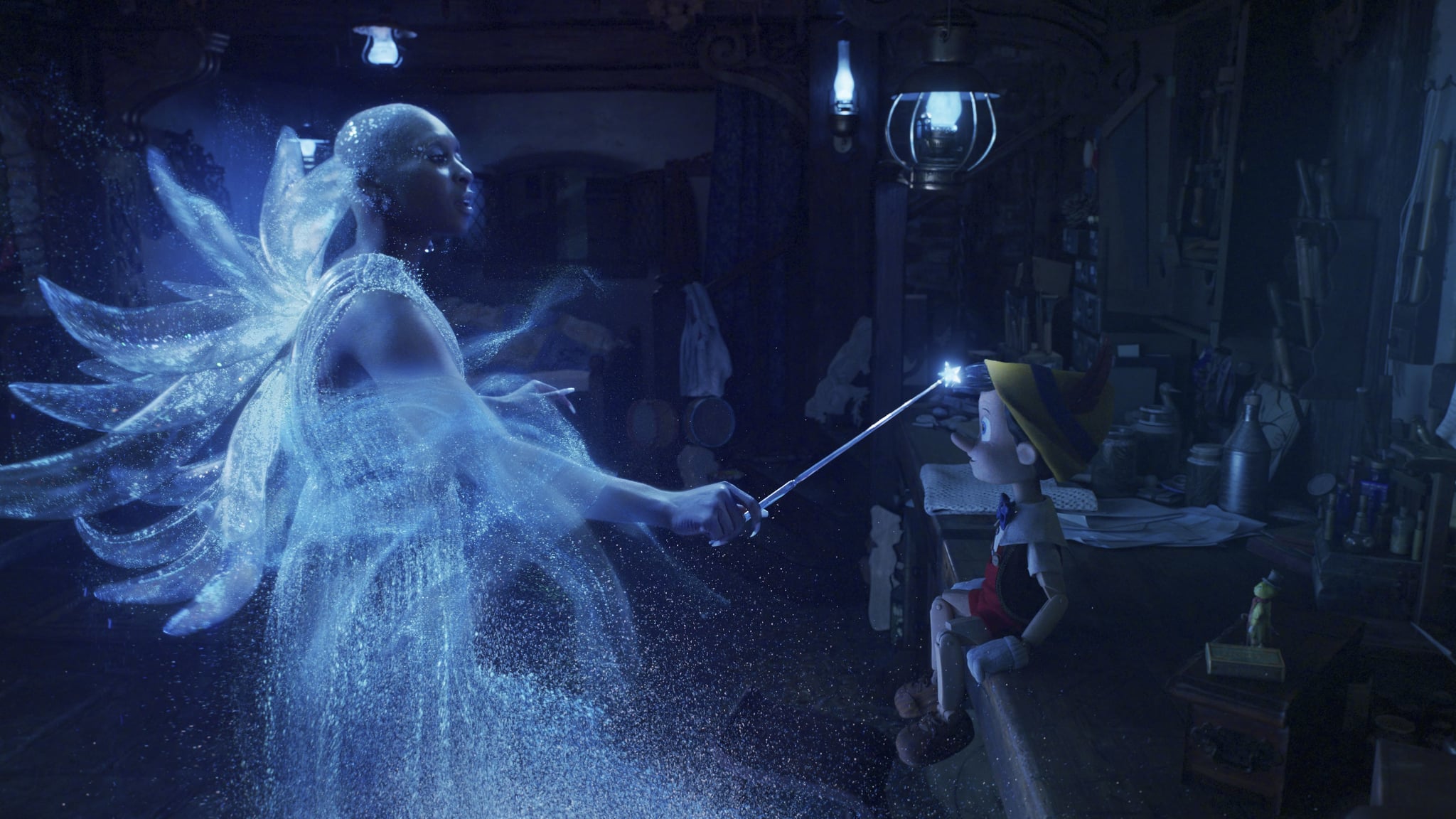 Disney's live-action remake of "Pinocchio" finally arrived on Sept. 8, and the beloved children's tale has gotten a complete magical makeover. The overhaul of Disney's 1940 classic stars newcomer Benjamin Evan Ainsworth as the titular wooden puppet, Tom Hanks as his woodworker father Geppetto, Joseph Gordon-Levitt as the wisecracking Jiminy Cricket, and Cynthia Erivo as the Blue Fairy, who grants Pinocchio's wish to become a "real boy." While the star-studded Robert Zemeckis-directed reimagining (not to be mistaken for Guillermo del Toro's "Pinocchio" hitting Netflix in December) of course pays homage to its predecessor, it also follows its own set of rules.

The cast of "Pinocchio" — which also includes Keegan-Michael Key, Luke Evans, and Lorraine Bracco — didn't have a chance to work closely together in person due to the filming style of the CGI-hybrid musical. Erivo tells POPSUGAR that her experience — which she also says took her back to her stage roots — was both "strange and wonderful all at once." "I watched some of [the movie] and I can't believe somehow, even though we're all in two separate places and didn't hear each other, we still managed to come together and it feels like one cohesive conversation. [It's] fantastic," she says.

Related:
Cynthia Erivo on Remaking Disney's "Iconic" Song "When You Wish Upon a Star" For "Pinocchio"

"Now we know that we can see ourselves on screen as magical beings, mermaids, fairies, and fairy godmothers, and know that we're allowed to be part of it."

The original "Pinocchio" film introduced a host of iconic characters, including Erivo's Blue Fairy. But aside from the obvious animation-to-human changes for the mystical creature, Erivo says her version (who she imagines is a Capricorn, just like her) is "very different" from her predecessor. "I think [the original Blue Fairy] was a bit more dainty, a little less forward. But I think that's what Robert wanted for this version," she explains. ". . . This version of the Blue Fairy is not ashamed of the fact that she knows a lot. She's very sweet and kind and practical, but she gets right down to business. I think that's a wonderful thing about her; she's playful in that way."

"The way she looks, we talked about that. This modernity and timelessness to the way we created her," she continues. ". . . I felt really connected to this particular role. It's something really different about her, not just because she's a fairy, she's just in her own space, and that's something I really understand."

Erivo has starred in previous TV and film projects like "Harriet," "Roar," and "Genius: Aretha" and will soon grace the big screen in both installments of the "Wicked" adaptation alongside Ariana Grande. According to her, "Pinocchio" has been a whole other beast to tackle, but she's honored to now join the ranks of actors like Halle Bailey, Yara Shahidi, and other Black women who have embodied — or will — famous Disney characters. Erivo believes her Blue Fairy — like Bailey's Ariel in "The Little Mermaid" and Shahidi's Tinker Bell in the upcoming "Peter Pan & Wendy" — is yet another glass ceiling broken for Black girls in the Disney realm.

"What's wonderful about myself, Yara, and Halle being a part of this world is that we now have [helped] open the door for all Black girls, and also all of us who didn't really see ourselves in this lexicon of work," she says. "Now we know that we can see ourselves on screen as magical beings, mermaids, fairies, and fairy godmothers, and know that we're allowed to be part of it. I hope that come Halloween, or whenever there's a time to dress up, that these little girls say, 'I want to be a Blue Fairy,' and it'll be a costume of the Blue Fairy we [see] now. That would be really wonderful."

"Pinocchio" is now streaming on Disney+.