Demi Lovato isn't standing down. On Wednesday, the singer released the music video for her latest single, a political ballad titled "Commander in Chief," shortly after performing it for the first time during the 2020 Billboard Music Awards. The somber video features Americans of various ages and backgrounds, along with an emotional Lovato, singing along to the powerful lyrics criticizing the president and his actions. Prior to the drop, she teased the video on her Instagram page, captioning the brief clip with a message encouraging her followers to stand with her and vote. "I'm calling on all of you, please join me in voting for this years election. Find your voter information at iwillvote.com," she wrote.

Shortly after, critics began pouring into the comments of Lovato's posts, which she quickly took to her Instagram Story to address. She highlighted a specific comment in which a follower expressed disappointment in Lovato's decision to call out Donald Trump, writing "I am personally ashamed to be a Lovatic right now," and adding that they hope the song doesn't ruin the singer's career.

Lovato then shared her response, writing, "You do understand as a celebrity, I have a right to political views as well? Or did you forget that we aren't just around to entertain people for our entire lives. That we are citizens of the same country and we are humans with opinions as well?"

"I'll take integrity in my work over sales any day."

"I literally don't care if this ruins my career. This isn't about that. My career isn't about that," she added. "I made a piece of art that stands for something I believe in. And I'm putting it out even at the risk of losing fans. I'll take integrity in my work over sales any day. I'm too busy being bummed that you expect me, a queer, Hispanic woman, to silence my views, beliefs in order to please my audience. i.e. your family."

Lovato's "Commander in Chief" addresses the state of the country ahead of the Nov. 3 election and urges listeners to find their voice against the chaos of events taking place. It also serves as a condemnation against Trump's handling of racial injustice and the coronavirus pandemic, as well as the social apathy that plagues us. "I'm not the only one that's been affected and resented every story you've spun / And I'm a lucky one, 'cause there are people worse off that have suffered enough / Haven't they suffered enough? But you can't get enough of shutting down systems for personal gain," Lovato sings. "Commander in Chief, honestly, if I did the things you do, I couldn't sleep, seriously / Do you even know the truth? / We're in a state of crisis, people are dying, while you line your pockets deep / Commander in Chief, how does it feel to still be able to breathe?"

We've always known Lovato to be a brave woman who isn't afraid to speak her mind, and she's holding to that with "Commander in Chief." Watch the full music video above, and keep reading to see all the teasers, as well as Lovato's posts ahead of her performance at the 2020 Billboard Music Awards. 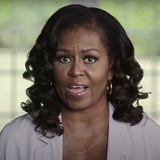 Michelle Obama's Plea to Americans: "Vote For Joe Biden Like Your Lives Depend on It"
Previous Next Start Slideshow
Demi LovatoPoliticsMusicMusic Videos