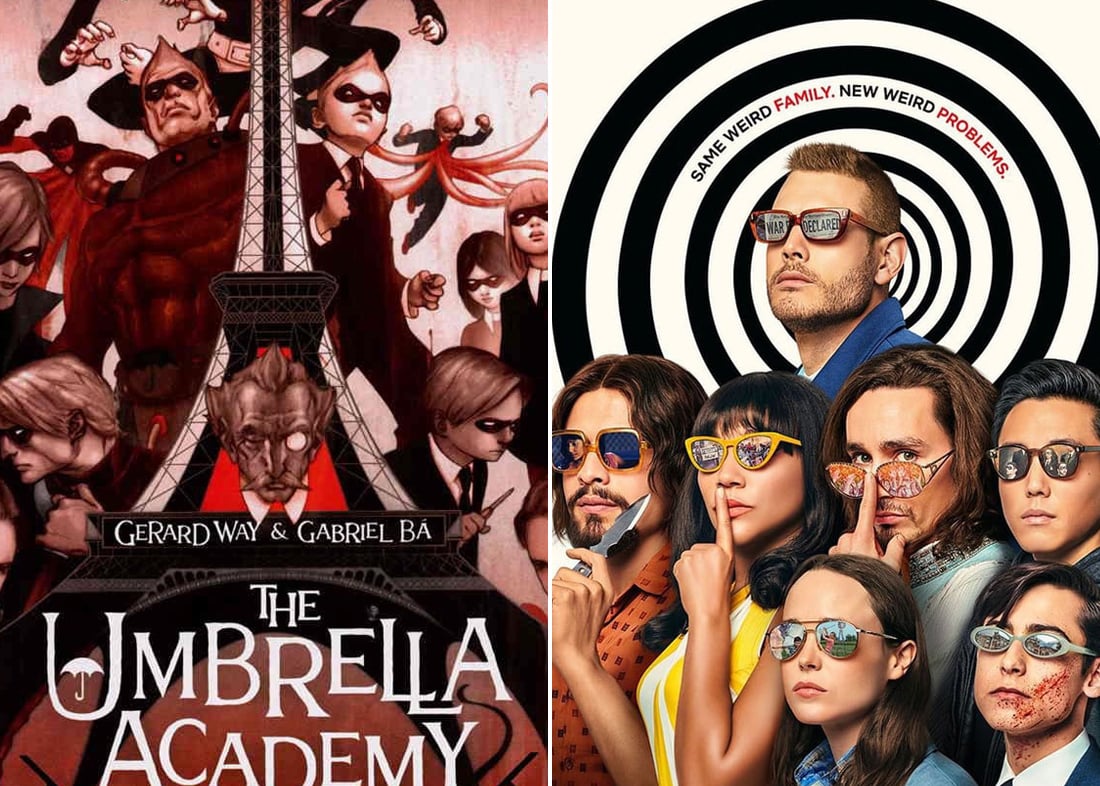 In the first season of The Umbrella Academy, the Hargreeves siblings join together when their long lost brother, Number Five (Aidan Gallagher), returns to present day and tells them the world is ending in eight days. Over the course of the first season, Vanya Hargreeves (Ellen Page) eventually discovers she's the most powerful of all the Umbrella Academy, and it's this discovery, coupled with her somewhat traumatic upbringing, that brings about the apocalypse. While this plot may seem somewhat complicated, it's actually much more streamlined than in the comic, which includes the Eiffel Tower taking off into space, a group of evil musicians called the Orchestra Verdammten that want to bring about the apocalypse, and a group of robots called Terminauts created by a man named Dr. Terminal.

By highlighting the most important plots on the show, we're able to get fully realized characters versus the somewhat flat depictions seen in the original six comic books, which sees Diego (David Castañeda) as the epitome of toxic masculinity, Allison (Emmy Raver-Lampman) as a vain femme-fatale, and an overtly sexualized Vanya who eventually turns on her family without cause. The relationships between characters are also vastly different on the show, allowing for the chemistry of the actors to shine through and make the characters actually feel like a dysfunctional family. This is most evident in the season one ending where the group works together to save Vanya AND stop the apocalypse versus the belittlement Vanya receives from the group in the comic, culminating in Five shooting her in the back of the head while saying he never liked her, which results in her becoming paralyzed and an amnesiac in Dallas.

The second season continues to diverge from the plot set forth in The Umbrella Academy: Dallas. The introduction of new characters not seen in the comic — including Vanya's friend-turned-lover Sissy (Marin Ireland), Allison's activist husband Ray (Yusuf Gatewood), and Diego's new flame Lila (Ritu Arya) — gives the group new motivations and higher stakes. For Vanya, she doesn't remember who she is or even that she has siblings. So, she makes Sissy and her son Harlan her new family and does anything she can to care for them, including bringing Harlan back to life through her "White Violin" powers. As Allison lands alone in the '60s, she eventually meets and falls in love with activist Raymond "Ray" Chestnut, foregoing the use of her powers and focusing only on the civil rights movement rather than trying to figure out a way to get back home. Meanwhile, Lila's character adds a whole new mystery to the season. Though she seemingly starts out as another patient at the same facility as Diego, we eventually learn that Lila is actually the Handler's adopted daughter and may actually be one of the 43 special children born on Oct. 1, 1989. These deeper relationships with people outside of the Umbrella Academy give the characters something to work for outside of their family and the apocalypse. The relationships also leave a lasting mark upon Vanya, Allison, and Diego, which opens the doors for even more storylines in future seasons.

Rather than sticking to the comic, the show also gives into fans' wishes, giving us more Klaus, less of Luther/Allison's somewhat weird relationship, and letting Vanya take on more of Ellen Page's characteristics in order for her to feel more authentic. While season one was spent getting to know the characters, diving more into specific fandoms allowed for an overall more enjoyable season two. Klaus was one of the most ridiculous parts of season one and by showing more of him and Ben (Justin H. Min), we get to explore what makes him tick and see into his psyche, particularly when it comes to trying to save the love of his life. Giving Luther more of a backseat role to the rest of the group really allowed Hooper to let his comedic chops loose, making him much more relatable than the gruff leader we see in season one. Vanya always felt somewhat off in season one — granted, this may have been due to her pills suppressing her real self — but in season two, it really feels as if Vanya has come into her own and can finally accept her whole self.

While there may be a couple of storylines from the comic I wish were included, like a living-statue of Abraham Lincoln, I'm glad the show has decided to make the Umbrella Academy its own. This keeps everyone on their toes as no one can truly know what's going to happen next. It's clear that as the series goes on, the show will continue to forge its own path while making sure to give the diehard comic fans the references they've come to expect. The introduction of the Sparrow Academy at the end of the season — which in the comic book The Umbrella Academy: Hotel Oblivion seems to just be an alternate team led by Mother that exists in tandem with the Umbrella Academy as an entirely new team in a world where the Umbrella Academy never existed — has me more excited than ever for a potential season three. Until then, you can stream both seasons of The Umbrella Academy on Netflix.