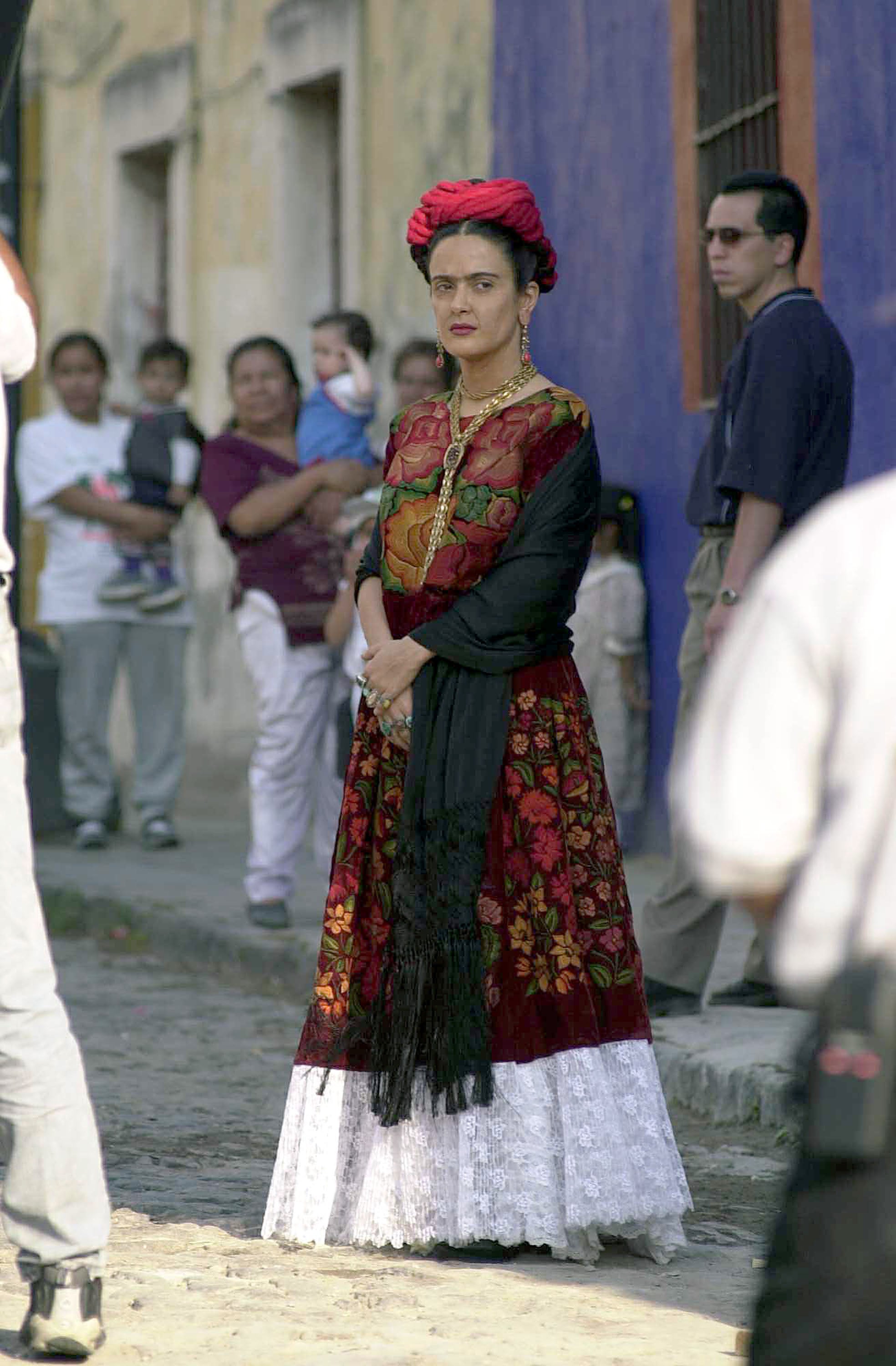 When Salma Hayek's biopic movie of the life of Frida Kahlo premiered 20 years ago, it undoubtedly brought the story of the accomplished and radical Mexican painter to many. Kahlo was already a prominent artist, but how many painters are household names? And of them, how many are women? And of those, how many of them are Latina women? In the years since the film "Frida" came out, the artist has gone from an art-world star to a global icon. Her face and her entire aesthetic have been abstracted, iconized, and even made into a controversial Barbie doll. She's become a symbol, and one that perhaps obscures the reality of who she was and why her story matters.

All of this makes it worthwhile to look back on "Frida," not as the tortured result of Salma Hayek withstanding Harvey Weinstein's abuse, but as an important cultural artifact that has shaped Latina identity. Communications professor of Latina/Latino Studies Isabel Molina tells POPSUGAR that Hollywood "wants to see their Latinas a particular way: not too dark, not too light, just the right color, just the right body, style, and shape." For Dr. Molina, "Frida" was able to have it both ways, strategically drawing in crowds with Salma Hayek's beauty and star power and then delivering a complex, expectation-defying film.

Dr. Molina has written more than once on "Frida" and points out how it frames Kahlo's journey through her relationship with a man, in this case Kahlo's husband, the famed muralist Diego Rivera. And indeed, watching the film, Hayek's beauty never fades, no matter how thick her eyebrow is or how in pain the body beneath it. "Frida" may have been directed by a woman, Julie Taymor, but the male gaze is still clear within it (perhaps that was Weinstein's influence). But Dr. Molina is also quick to point out that Kahlo is not a sex object in the film, saying, "She's shown really having agency over her body and sexuality . . . She was the one doing the desiring." And while sex is certainly an important part of the film — Kahlo's bisexual romances, Rivera's dalliances — it is only one part of a complex tale of a complex woman.

Dr. Molina remembers going to see the movie on opening weekend. "It was mostly Latinos in the movie theater . . . That really brought it home to me how important that representation was. Because at that time, there was just nothing. In 2002, there was the 'George Lopez Show,' right? That's it. Nothing focused on women," she says. And "Frida" didn't just tell a woman's story but focused on "a smart, intelligent, capable artist [who was] politically motivated." It was like no mainstream film out at the time. Dr. Molina remembers, "I left the theater thinking, 'Wow, that was really good.'"

In a 2017 op-ed in the New York Times, Hayek wrote, "My greatest ambition was to tell her story. It became my mission to portray the life of this extraordinary artist and to show my native Mexico in a way that combated stereotypes." And she did that, but of course, it's never that simple. The combination of Hayek's beauty and the film's focus on Kahlo's personal life had the effect of neutering the artist's politics, according to Dr. Molina. She asserts the film "presents this image of Frida Kahlo, her art, and her politics that's much more safe to consume . . . The movie just made her less political. And in doing that, you make it possible to then use her image to sell pretty much anything." 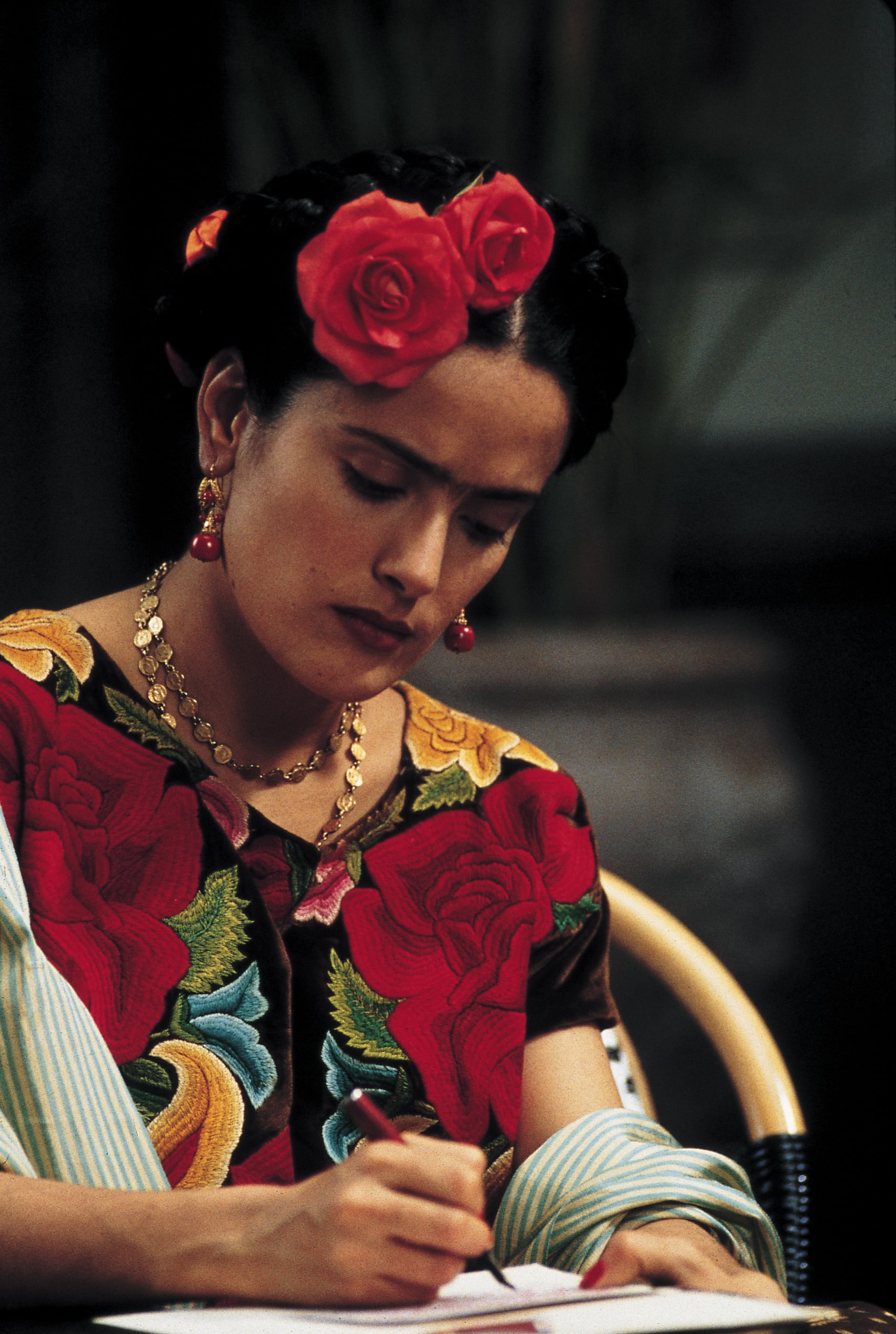 "Her image has been commodified, her art has been commodified," agrees Arianna Davis, journalist and author of "What Would Frida Do? A Guide to Living Boldly." She wrote the book in part to tell "the real meaning and the real story behind" the face that covers so many T-shirts. In researching the artist, Davis was particularly struck by just how far ahead of her time Kahlo was, a fact that doesn't shine in the film. Part of that is just the limitations of filmmaking. We see Kahlo struggle against her mother's expectations, but with such limited time, it's hard to know what was typical. Plus, we've become accustomed to shows like "The Great" that combine modern and historical cultures and aesthetics to the point where it's easy to lose track of what was normal and when.

But Kahlo was hardly normal. Davis reminds us that she was coming of age in the 1920s and 1930s when "the women's suffrage movement was only just really in the early stages." And yet, here was Kahlo responding to a reporter's questions about her husband with quotes like, "He does pretty well for a little boy but it is I who am the big artist." That was 1933, a time when, according to Davis, "Women are still supposed to be at home supporting their husbands, especially if your husband is like a world-renowned, famous artist. Maybe you're allowed to have a little bit of a hobby on the side, but your main focus is being a homemaker." And indeed the article where that quote first appears bears the headline "Wife of the Master Mural Painter Gleefully Dabbles in Works of Art."

With that context, Davis can't help but be struck by the fact that Kahlo was "so vocal and so outspoken about her own dreams, her own passions. And she didn't hesitate to, either privately or publicly, just be her own cheerleader, speak up for herself, and have confidence . . . the more that I saw little instances like that, as I was just researching her, the more I was just like, 'Wow, she was just really so badass.'" 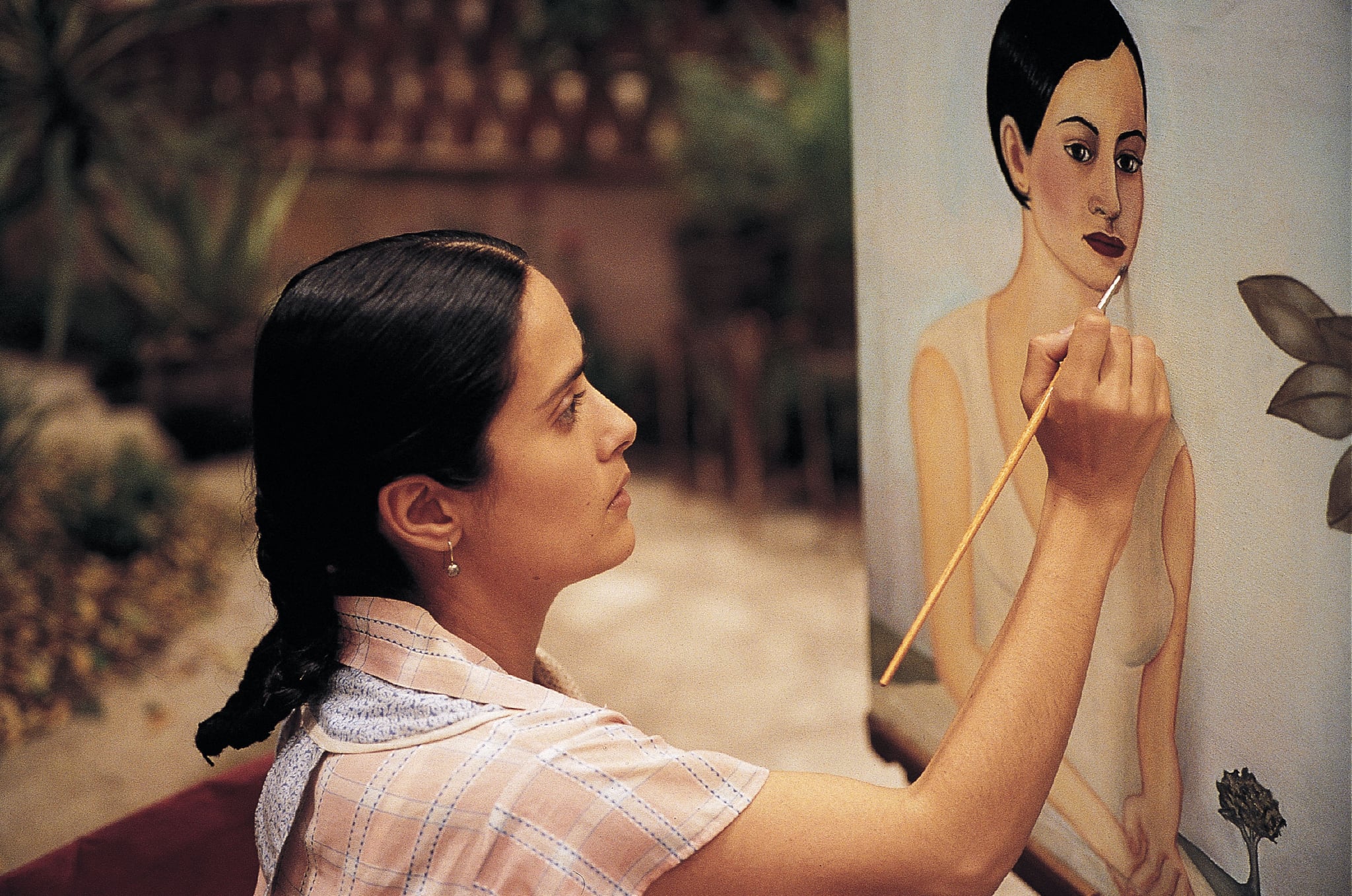 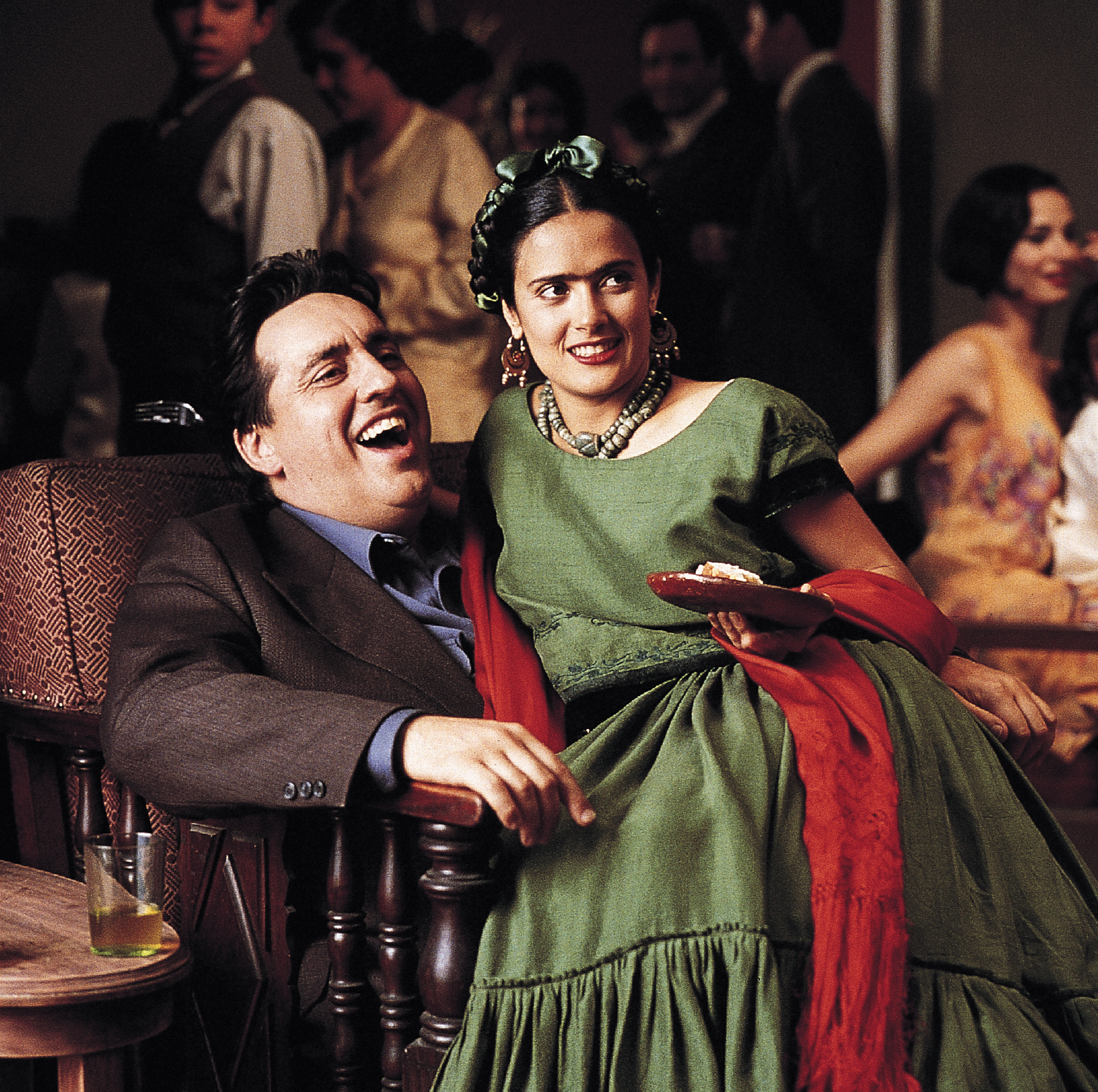 The Kahlo legend — how it was portrayed in "Frida" and how we've come to understand it since — has had a lasting impact. She certainly impacted our ideas about beauty. Davis reminds us that as someone who painted dozens of self-portraits, Kahlo "had the power to show her own image. So if she wanted to clean herself up a little bit, if she wanted to make herself look thinner, or to remove the mustache or the unibrow, she could have. But she chose not to, she depicted herself exactly how she was." And she was beautiful and celebrated her own beauty, re-creating her favorite lipstick shade, the ribbons she put in her hair, and her braid pattern on canvas. Kahlo was a woman who cared about her appearance but who painstakingly defined her own image for herself. She also pushed boundaries in other ways. Davis shares, "we're still today, of course, talking about how to normalize conversations around miscarriage and pain and things like that, but she was one of the very early trailblazers," painting her experiences around those issues with vivid emotional clarity.

"She had a way of putting thoughts and feelings and emotions onto canvas," says Davis, "As much as I've stared at all of her paintings and like so much of her work, I still get blown away sometimes [by] the emotion that she was able to evoke just from paint brushes. She just had a fearlessness and an ability to just translate those emotions onto canvas." And it is that fearlessness that endures in Kahlo's art and in Hayek's film bearing her name. "Even if you don't know anything about Frida, you know there was a historic woman who lived her life very boldly and outside of the box," Davis says. "Frida" the film opened the lid on that legend, however imperfectly, inviting us to break the rules, find our own definitions of beauty, and rely on our own voices. It's a legacy to be proud of.