After four long years, Justin Bieber is back with new music! As promised, the 25-year-old singer blessed us with a new song titled "Yummy" on Jan. 3. Bieber previously teased the track on Instagram with a series of photos, writing, "December 24, December 31, January 3 ... #2020," referring to his upcoming new album, his YouTube docuseries titled Justin Bieber: Seasons, and his tour.

The new track is a sweet ode to Bieber's wife, Hailey Baldwin, who he secretly married Sept. 13, 2018, before having an official South Carolina wedding ceremony a year later. "Hop in the Lambo'/ I'm on my way," he sings. "Drew House slippers on with a smile on my face / I'm elated that you are my lady."

Ahead of the song's release, Bieber opened up about his forthcoming music, saying, "I feel like this is different than the previous albums just because of where I'm at in my life. My past, my mistakes, all the things that I've been through — I believe that I'm right where I'm supposed to be, and God has me right where He wants me." 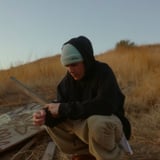 Back in October, Bieber also posted the word "R&Bieber" on Instagram. Oh, and his team coincidentally filed legal documents to try to trademark "R&Bieber" "for entertainment services in the nature of live musical performances and production of sound recordings," as well as merchandise and film. Coincidence? We think not! Watch the lyric video above, and stay tuned for the official "Yummy" music video that's set to drop Jan. 4!

Bieber released his fourth album, Purpose, in 2015. However, he hasn't been totally out of the spotlight since he recently collaborated with Dan + Shay on "10,000 Hours."

Ciara
Ciara, Baby Tate, and More Artists Share What Black Music Month Means to Them
by Njera Perkins 23 hours ago