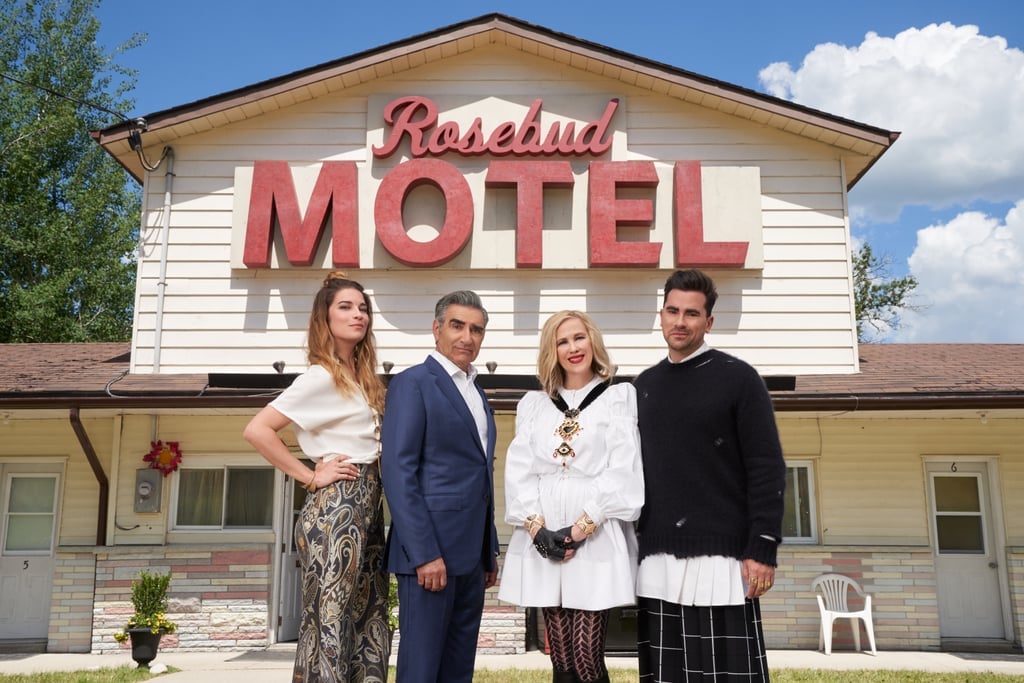 Seeing as the town of Schitt's Creek is (devastatingly) fictional, you can't exactly call up Stevie Budd to book an overnight stay at the Rosebud Motel or sip tea with Twyla Sands at Café Tropical in real life. But you can visit the various locations where Schitt's Creek was filmed, which dedicated fans of the show frequently do.

Whereas many of the sitcom's interior scenes were shot in various studios across Toronto, most of the exterior scenes were captured in a quaint Canadian town called Goodwood, Ontario, just north of Toronto. (A pretty fitting name for such a wholesome series, wouldn't you say?) In fact, the buildings that transformed into Rose Apothecary, Bob's Garage, and Café Tropical for the show are all situated at the same intersection, with the town hall and Mayor Roland Schitt's blue house located just down the street. Meanwhile, the Rosebud Motel building is on Hockley Road in Orangeville, Ontario.

Related:
16 Behind-the-Scenes Facts About Schitt's Creek and Its Beloved Cast

In a 2019 interview with CBC, Schitt's Creek cocreator and star Dan Levy reminisced about bringing his show to life in Goodwood. "I remember season 1, we had to approach this town and tell them, 'You are going to be Schitt's Creek.' And I think it took a lot of blind faith on the part of the town to believe us when we said, 'We will be doing this place justice and we will be honouring small-town life in your city.'" And it sounds like Goodwood's residents — of which there are less than 700 — have been on board ever since. "They would set up their lawn chairs on their front lawns and watch us shoot across the street," fellow star and cocreator Eugene Levy — Dan's father — told 92Y Talks. "They would stand around the monitors in the director's booth and actually comment . . . 'You sure you want to keep this?'" Hah!

Now, before you pull up Google Maps and plan out your pilgrimage to Goodwood and Orangeville, it may be safest to refrain from flocking there in your finest Moira Rose-esque wig just yet. Earlier this year, Dan urged fans to not visit Goodwood amid the COVID-19 pandemic. "The towns where we shot Schitt's Creek were so lovely and accommodating to us," the actor tweeted. "Please show them the same respect. Visiting right now is a threat to the residents' health and safety." To tide you over in the meantime, take a virtual tour ahead to see what Café Tropical, Rose Apothecary, and more Schitt's Creek landmarks look like IRL.

HBO
Meet the Cast of Your New Favorite Period Drama, The Gilded Age
by Divya Meena 6 hours ago