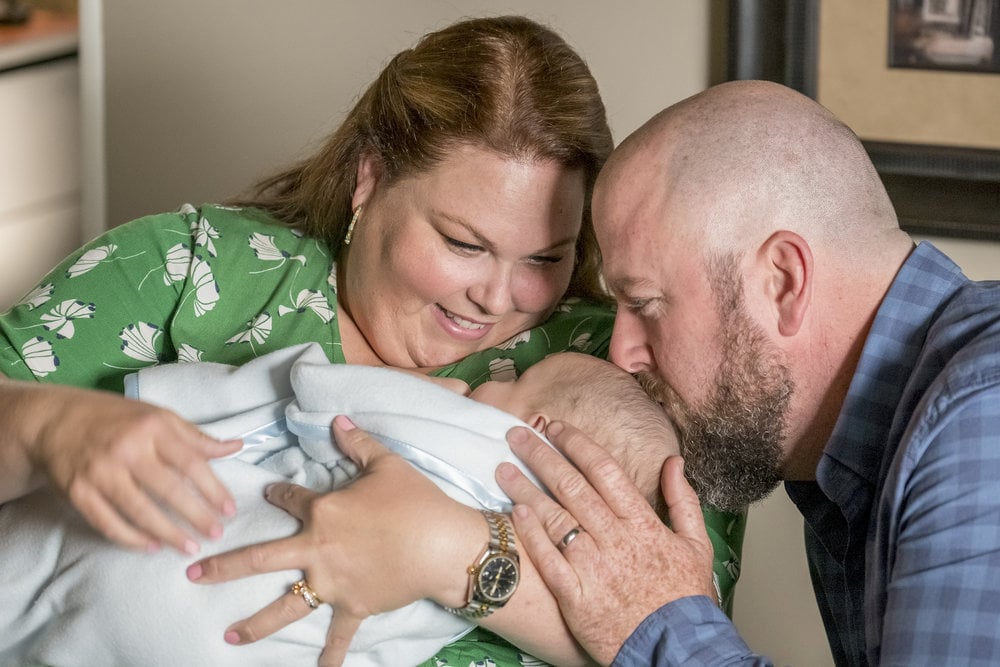 This Is Us kicks off its season four premiere with lots of change, just like the cast and writers previously promised. Tuesday night's episode introduces viewers to new characters and storylines, which, in true This Is Us fashion, left everyone guessing until the very end. The most pivotal of these introductions might be the big reveal about Kate and Toby's son, Jack, and his exciting future.

The season premiere provides fans with glimpses into the life of a blind musician, who turns out to be Kate and Toby's son, Jack Damon, as an adult. This grown-up Jack is played by Blake Stadnik, a legally blind musical theater actor.

Jack goes throughout most of the episode unidentified, although we know he owns a supercute dog and he falls in love with (and marries) a diner waitress named Lucy. He writes songs about their relationship, and eventually they find out they're expecting a child together. Eventually, it's clear we've been watching a flash-forward of his life, and his identity comes into focus. In a flashback, we see Kate and Toby find out their son will be blind after his premature birth. Little do they know, he'll eventually follow in his mother and grandmother's footsteps and perform music in front of packed arenas.

Series creator Dan Fogelman said after a laborious casting process, Stadnik was "clearly the guy" to play Jack Damon. "It was an interesting casting process because we wanted to cast a blind actor. We had started our casting process very early, even in our off-season. I was looking for a leading man who was without sight and who could be funny, charming, accessible and sweet," Fogelman told Entertainment Tonight. "We wanted to find an actor who could be a leading man and [was] very handsome and very funny and looked great with his bare abs on national television, but also be able to stand in the Greek [Theatre] in front of a live audience and actually perform and sing a song. There were a lot of boxes to check."

That's high praise coming from the mind behind the show! It's unclear when we'll see Jack Damon next, but Fogelman promises this storyline "will be returned to." Knowing This Is Us, it'll come when we least expect it.

HBO
Meet the Cast of Your New Favorite Period Drama, The Gilded Age
by Divya Meena 13 hours ago