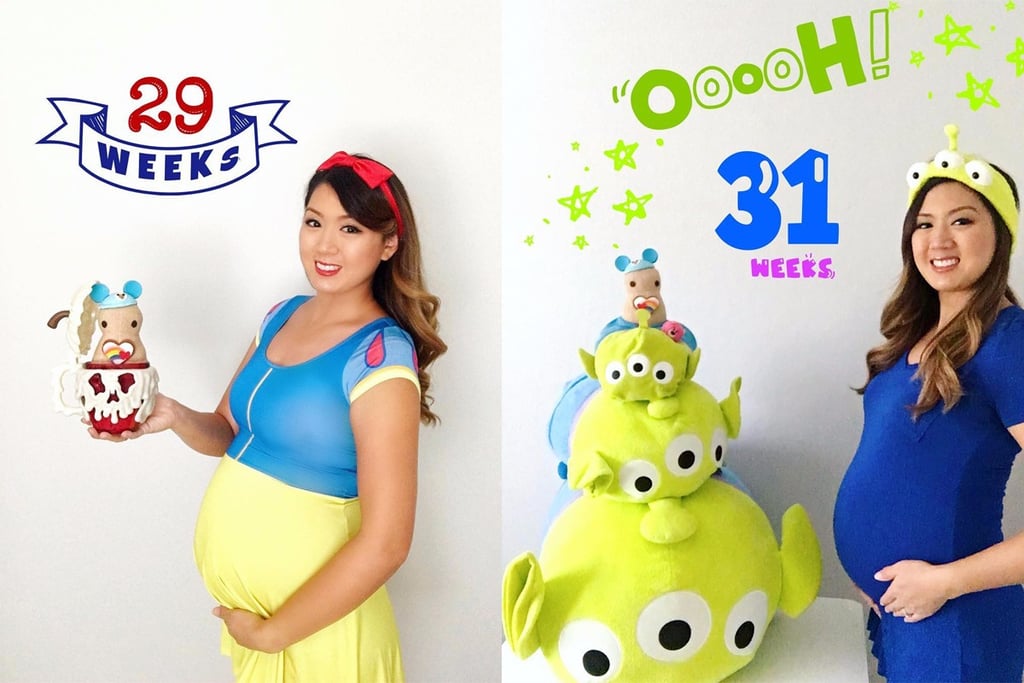 Jenn and Peter Boonsom are head over heels for all things Disney — and for each other. Many of the couple's major relationship milestones have taken place at Disneyland, including their first "I love yous," their engagement, and, finally, their enchantingly magical Disney fairy-tale wedding ceremony. So it was only natural that Jenn and Peter, known to their 21,000 Instagram followers as PBandJellyJenn, would find a crafty way to incorporate the Happiest Place on Earth into the nine months leading up to their baby's arrival.

Before we discuss the duo's Disney-fied craftiness, we must first dive into a little background on their rocky road to pregnancy. It hasn't been easy for Jenn to remain pregnant before now. After months of struggling to conceive, Jenn suffered an early miscarriage with her first pregnancy. "We were devastated, but looked towards a brighter future ahead," she told POPSUGAR. Months later, Jenn became pregnant with a son, and "in a heartbreaking turn of events," she suffered a second miscarriage 21 weeks along.

But their journey didn't stop there. "Just when we were at our darkest moments after our angel son's loss, literally the same week he was supposed to be due, we found hope and hearts again by finding out we were pregnant again!" Jenn recalled. "In the most beautiful twist of fate, we found out that not only were we pregnant again, but our rainbow baby has a scheduled due date the same week we lost our angel son last January."

To celebrate the momentous arrival of their future baby boy, Jenn knew she had to somehow bring Disney into the picture, as it "has brought [her] so much joy and happiness" since childhood and helped her get through the rough patches of her pregnancy journey. Starting at 22 weeks, Jenn began snapping bump progress photos while wearing the cutest Disney-themed outfits and accessories. In each picture, Jenn poses holding a tiny peanut-shaped "mascot," which her husband made by hand as a tangible representation of their future rainbow baby. Before Peter sealed up the toy, Jenn's family wrote messages of hope on small felt hearts to stuff inside. Could this be any more adorable?!

Of course, Jenn is really hoping her future "peanut" enjoys Disney as much as she and Peter do, and it looks like the parents-to-be are already grooming him to be a devoted fan. The two celebrated their babymoon at Disneyland (are you even surprised at this point?), and the baby was "happily kicking away" during the It's a Small World ride and "especially loved when we stopped for a churro," Jenn told us.

We're so excited for Jenn and Peter to welcome their future Disney addict into the world! Check out all of Jenn's adorable bump progress photos ahead for Disney pregnancy photo inspiration, and be sure to follow along with the rest of her journey on her Instagram account and blog.