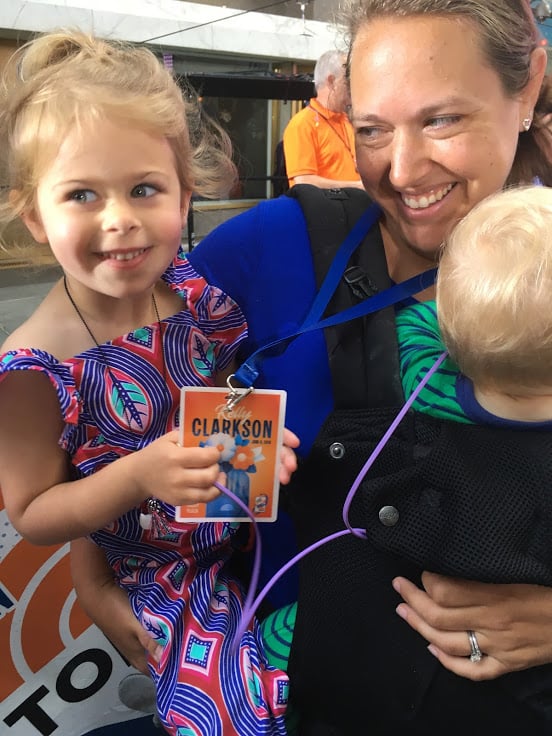 I try to live life without regrets. I like to think I do a pretty good job at that when it comes to parenting and being a wife, but when it comes to doing things for myself, I'm severely lacking. When I kept finding myself having regret over the same thing multiple times, that's when I finally said to myself, "Life is too short! Enough is enough!" So, after many missed opportunities to check something off the top of my bucket list, I finally took the plunge and did it with both of my young kids in tow.

It may sound silly as a 34-year-old to have an obsession with a musical icon, but I do. I'm a HUGE Kelly Clarkson fan. I've seen her in concert countless times, usually at least twice each time she's on tour. My biggest dream in life (aside from becoming a mom) has been to see her live from the front row. The closest I've come is the fifth row, but that was until a few weeks ago. I was done letting my excuses hold me back, and I packed up my 11-month-old and my 4-year-old, grabbed my mom, splurged on a hotel room, and went to New York City to see her live on the Today show. It was quite the whirlwind, but it was 100 percent worth it. I never jumped on that "YOLO" bandwagon (I feel so weird even saying that phrase) — I was tired, the kids' schedules kept me busy, I couldn't find the time, and so on — so this was the biggest "what the hell" moment I've ever had. And now that I've done it, I encourage all moms to throw away all the reasons why they shouldn't do something and instead focus on all the reasons why they should. My kids' first concert was my favorite singer, someone they've both been listening to since they were in the womb. We made memories, we had meltdowns, but we made it happen.

But let me start at the beginning. Before I was married and had children, I lived about 45 minutes from Manhattan. Every time I'd see that Kelly was scheduled to be in NYC for something, I would dream of dropping everything and hopping on the train to see her. I never did it because I was working, in school, couldn't take time off, etc. I had all of the excuses. And in my current life, I have two young kids and a now over 90-minute commute to Manhattan, so my dream of hopping on a train to see her felt like it was slipping further away. I mean, you have to be in line at Rockefeller Plaza by at least 5 a.m. (some people camp out the night before), and with an almost two-hour trip to get there, that would mean getting myself ready, waking my kids up, and getting out of the house by 3 a.m. Then you have to wait in said line for hours before they even begin to let people into the plaza without a guarantee you'll be anywhere near the stage. THEN, once you're in, the actual concert doesn't begin until 8 a.m. (and lasts until 9 a.m.). Doing this as a young, single person doesn't even sound appealing, but with two kids? Impossible! Or so I thought.

So, maybe find a place to stay in the city for the night so the wake-up call comes a little before 5 a.m. instead of 3? But NYC hotels are expensive. And how do you make it around the city with a giant double stroller? Car seats in cabs? Nope. You're probably asking yourself, why not just leave the kids at home? Well, my husband works, my son is still nursing, and it's a lot to ask a babysitter to take care of a preschooler overnight or with a 3 a.m. start time. See what I mean when I say I had all of the excuses?

Related:
I Tricked My Kids' Grandparents Into Babysitting For an Entire Week — Here's What Happened

I don't know what came over me, but I finally said "Screw it!" and asked my mom (who I've turned into a Kelly Clarkson fan) two days before Kelly's scheduled Today show Summer Concert Series appearance if she wanted to go. She looked at me like I was crazy, but had a sly smile that gave me the feeling she wanted to be crazy with me. We decided to splurge on a hotel near Rockefeller and make the most of our trip to NYC. I went to the grocery store and bought any and all snacks for the kids. Then I headed to the Dollar Store and bought new toys, trinkets, books, crayons, markers, stickers, and anything small that would fit into the diaper bag. And as a last resort, because she doesn't get a lot of screen time, I downloaded my daughter's favorite shows on my mom's tablet and grabbed her fun cat-ear headphones. We packed everything we'd need in two backpacks, a big purse, and the diaper bag, threw them all in the double stroller, and headed to the train station.

Kelly preformed three songs, and I rocked out to all of them while simultaneously jumping up and down, singing along, holding the baby, and throwing snacks at my daughter.

We walked from Grand Central through Rockefeller to our hotel so we could see how long the walk would take in the morning. We checked into the hotel, went swimming in the rooftop pool, had pizza in bed for dinner, decorated a poster to hold up for Kelly, and went to sleep early with our alarm set for 4:30 a.m. When that time came, my mom and I got ourselves ready, gently woke the kids, and headed to our destination with the 4-year-old walking and me wearing the baby. We were lucky to have a family member with a connection at NBC and ended up with VIP tickets, which meant we didn't have to wait in line as long, and we were among the first group let into the plaza. We walked in, and the stage was right in front of us. I couldn't believe it. I thought it was a mistake and at any moment someone would snap, "You can't stand here." But no one did. We set up our spot where we'd reside for the next four hours, resting the diaper bag on the big amplifier in front of the stage, and waited as the crowds piled in. We chatted and made friends with some other concertgoers while my daughter ate cookies for breakfast (because it kept her quiet, and what the hell) and in the sea of people, I discretely nursed the baby. I became a little worried when the whining started less than an hour into our four hours of standing, so I pulled out some silly putty, bubbles, and more snacks, which kept my daughter occupied a little longer. The baby was content to be worn for a while until he wasn't anymore, so I unstrapped him and just held him until . . . wait for it . . . Hoda Kotb came over and asked to hold him! He went to her, they smiled at each other, and she danced with him a little while my mom tried to grab some good pictures.

Related:
10 Hotels With Amazing Kid Amenities That Make All the Travel Hassle Worth It

Then the big moment came. Kelly came out, and I thought I might lose it. She was RIGHT in front of me. I could see the sparkle of her jewelry; I could see the texture of her hair; I could see the wires from her ear piece. I could have touched her if that wasn't an inappropriate and weird invasion of space. I got a glimpse into her behind-the-scenes routine while she and her band and music manager worked out the kinks during sound check for the live show. She even looked out into the crowd between songs, pointed to my son and said, "Look at that baby!" That's right — Kelly Clarkson was talking about my baby. The fact that my daughter was sitting on the ground pouting and whining about wanting to ride the subway couldn't have bothered me less in that moment.

Kelly preformed three songs, and I rocked out to all of them while simultaneously jumping up and down, singing along, holding the baby, throwing snacks at my daughter and picking her up so she could see, too. If she hadn't been woken up before the sun, she probably would have enjoyed herself more as well, but she'll always be able to say her first live concert was in the front row for Kelly Clarkson on the Today show in New York City, and that's pretty cool. My mom and I had an awesome time, and we were both pleasantly surprised at how well both kids held up. It was an amazing experience that would have only been made better if Kelly and I got to chat and she realized we'd be instant best friends like I've always known we would be. But, hey, I need a new dream now anyway, right?

Kiernan Shipka
Let's Admit It, Sabrina From Chilling Adventures Is Actually a Terrible Friend
by Kara Kia 1 hour ago