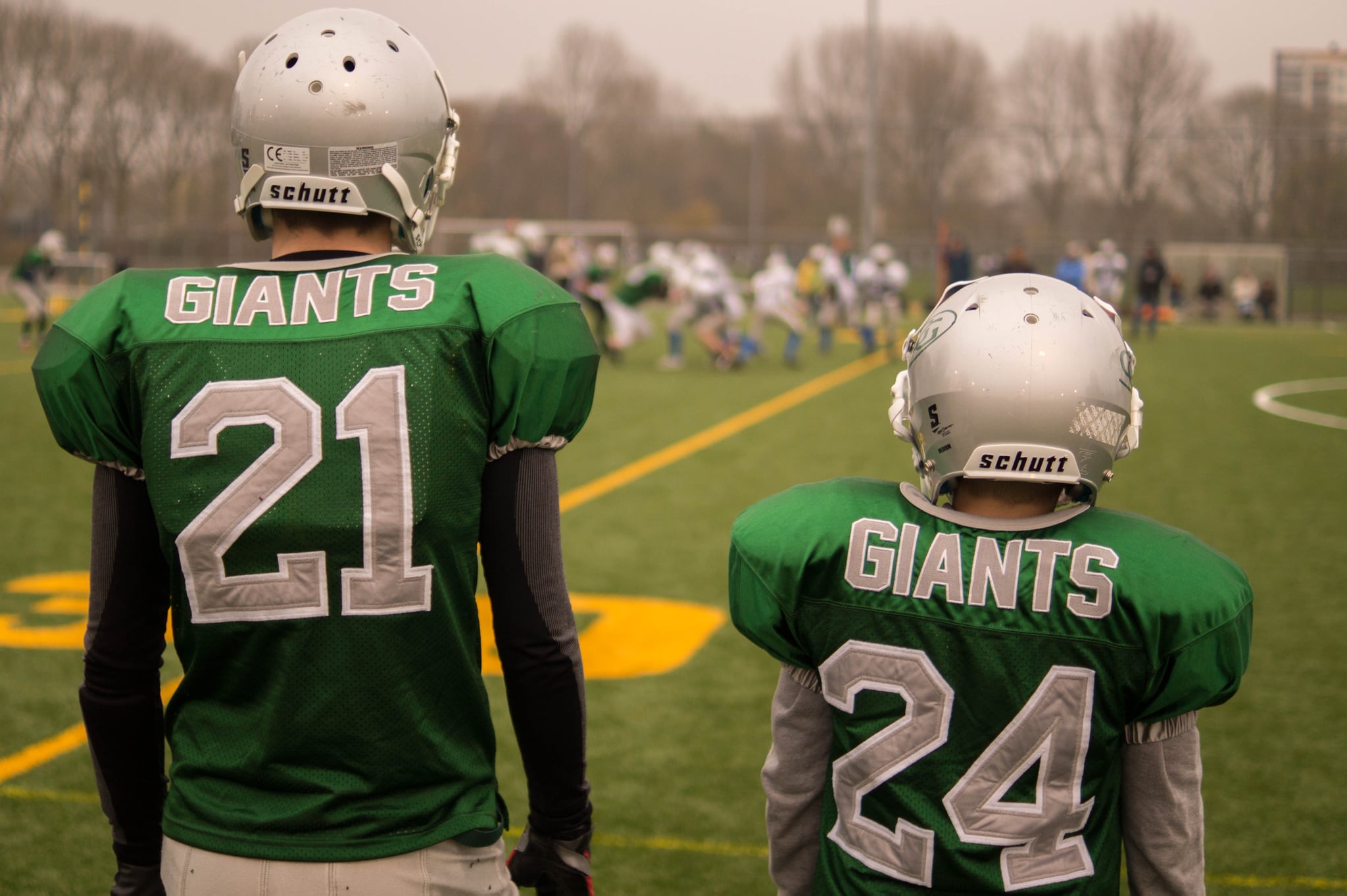 "You've got a future linebacker on your hands." It's a phrase that, if I've heard it once about my son, I've heard it a hundred times. Yes, he's rather large for his four years — though his doctor assures me he's not abnormally heavy or tall. And yes, he's extremely physical — running, tackling, and screaming are three of his favorite activities. (BTW, he also enjoys cuddling, dancing, and helping me clean.) And yes, he looks the part with his stocky frame and Tom Brady haircut. But does that mean I'll be registering him for peewee football this Fall? Absolutely not.

I didn't even realize that little kids' football was a thing until last year, when my almost 7-year-old daughter started playing soccer on the same fields that also housed football games for some shockingly young kids. Their heads didn't look large enough to support their helmets, yet there they were, decked out in layers of padding in the 90-degree heat, running at each other with reckless abandon. It felt wrong to me then, the idea of little boys engaging in an activity that would require that level of body protection, and apparently I'm not the only one who thinks so.

Related:
I Won't Let My Kids Quit a Sport (or Any Activity) Midseason

The bodies of children aren't strong enough to deal with the head and brain trauma that occurs during tackles.

In my home state of Illinois, a plan to ban tackle football for children under 12 is currently up for vote in the House. Called the Dave Duerson of CTE Prevention Act, the legislation is named for a former Chicago Bears player who died in 2011 of a self-inflicted gunshot wound and was later found to be suffering from chronic traumatic encephalopathy (CTE), a progressive, degenerative brain disease found in people with a history of repetitive brain trauma. According to the Concussion Legacy Foundation, a group dedicated to the study, treatment, and prevention of the effects of brain trauma in athletes and other at-risk groups, CTE can start early in life and can develop without any signs of concussion.

Also this year, several former NFL players, including Hall of Famers Nick Buoniconti and Harry Carson, joined with the Concussion Legacy Foundation to call for an end to tackle football for kids ages 13 and under. The parent education initiative is called Flag Football Under 14. During the official announcement, 77-year-old Buoniconti, who has been diagnosed with dementia and probable CTE, said: "I beg of you, all parents, to please don't let your children play football until high school."

Screw the Stereotype — I Love Being a Soccer Mom

The reason is simple: the bodies of children, especially those under 14, and particularly their necks and upper bodies, aren't strong enough to deal with the head and brain trauma that occurs during tackles. And football, no matter how expertly played, involves a lot of tackles. The foundation's research, taken from a 2013 study, shows that youth tackle football players ages 9 to 11 received an average of 251 forceful head impacts each season.

I don't see why anyone — but especially young children with highly undeveloped bodies and brains — should subject themselves to a sport that involves getting hit in the head more than 250 times per season, when each of those hits could potentially cause long-lasting, severely detrimental health issues. What is the payoff? So, no, my son won't be playing football if I have anything to say about it. You might think he's built for it, but I do not.