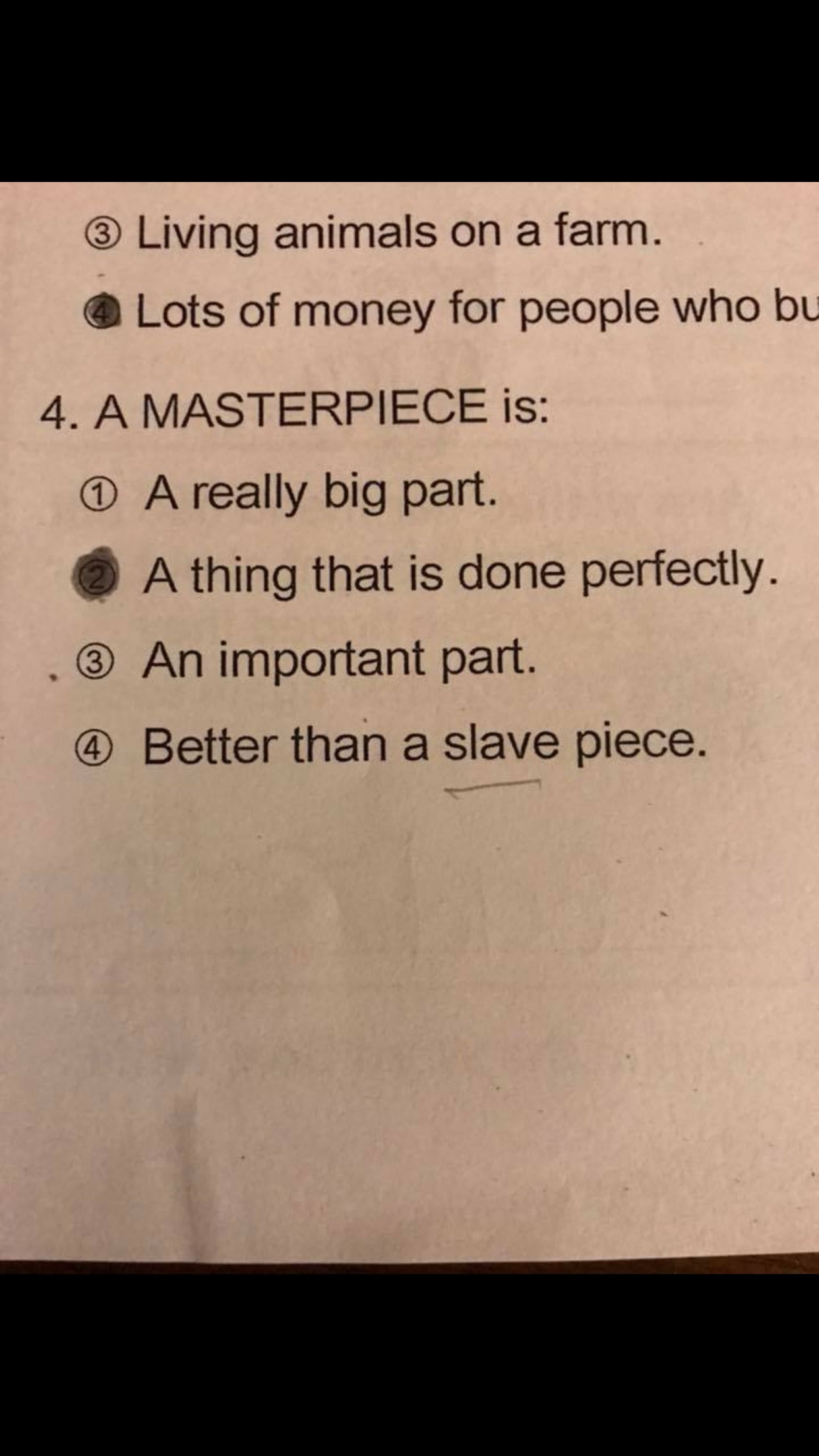 Helping your kids with their homework is something most parents do with pleasure. It's a chance to spend time together, teach your child something valuable, and help with their problem-solving skills. But what happens when a simple assignment takes a horrible turn? One mother, who wishes to remain anonymous to protect the privacy of her family, recently noticed something terrible in one of the multiple-choice questions on her second-grade son's homework assignment. The question asked what a masterpiece is, and one answer option read: "better than a slave piece."

"My initial reaction was that I read it wrong. Then I had to look at it for several minutes and think about what this was saying," the mom, whose son is adopted from Africa, told POPSUGAR. Thinking she was making a bigger deal of it than she needed to be, she put it on her Facebook page to see if she was overreacting. The responses she got were a large mix of shock and anger. "How I read it is that masters are better than slaves, and therefore white people are better than black people."

Encouraged by her friends and family, she spoke to her son's teacher. "I caught her completely off guard, and she said she didn't see it and that teachers got caught up with report cards the first week back from break," she continued. She was then given assurances by the teacher that she would bring it to her grade-level team to discuss and remove it.

However, this conversation wasn't as comforting as she had hoped. "I didn't feel this was exactly the response I was looking for (she wasn't horrified), so I will be sending an email to the principal to see if I can get a better response."

As a mother of an African-American child, she explained why this assignment is additionally complicated for and hurtful to her. "[My son] has very little knowledge of slavery, and I don't want to make it a big deal to him," she said. "In my opinion, it's mine and his educators' responsibility to discuss these issues in an appropriate way." Certainly the discussion of slavery should be much more in depth and handled better than grossly tacking it on as an antonym in a multiple-choice question.

Related:
This Kid's Answer to an Alphabet Riddle Is So Profound, We Don't Have the Heart to Correct Him

"This was just a ridiculous and horrific oversight by another teacher who threw this together," the mom said. "The way we handle it is discussing how amazing being black is and all of the courageous and powerful black people who came before him. My concern is that these subtle acts of racism that continue to be ignored or overlooked send a silent message that if you aren't white, you're less than, which is absolutely not true."

by Sarah Wasilak 24 minutes ago