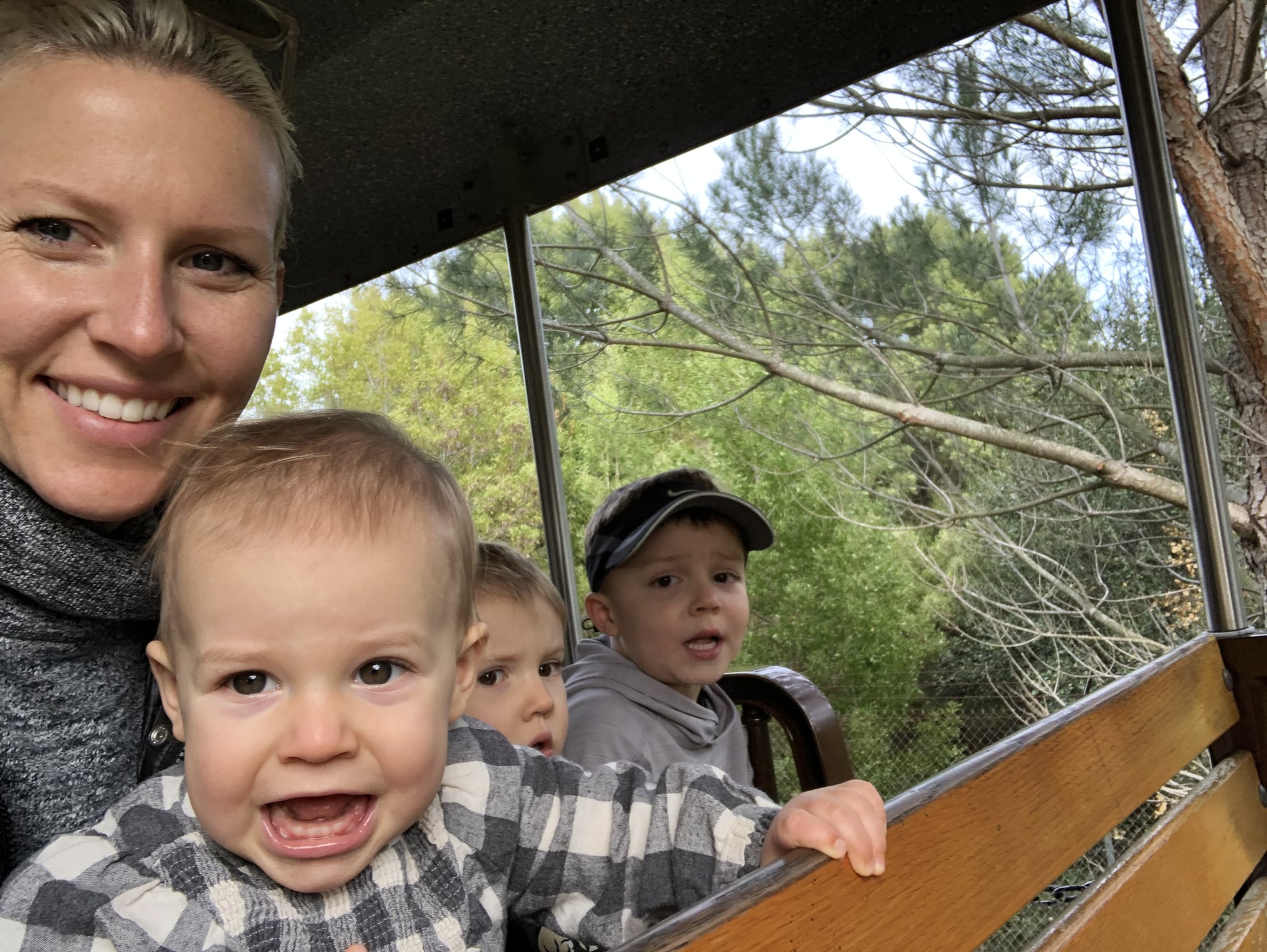 There's a debate over whether an old study that found three is the most stressful number of kids to have is true. But if there was a study of parents with three little ones, no one would be questioning it. Because having a trio of kids roughly kindergarten age and younger is nothing if not stressful, loud, exhausting, and overwhelming (also, fun!). There's no way to really understand what daily life with a circus of toddlers and babies looks like until you've lived it. But the least one mom of three (mine are 1, 3, and 5) can do for another is to give her a heads up. I'm here to help you set those expectations superlow and share a tiny glimpse into what you might be in for (besides lots of hugs).

1. It's a Logistical Nightmare

Three young kids means three completely different schedules. The oldest might be in kindergarten, the middle in half-day preschool, and the baby still trying to take multiple naps a day. Good luck figuring out how to make both school drop-offs on time while also keeping the little one on a solid routine. (Kidding! There is no routine for the third!) Even better luck finding childcare that works with everyone's schedule and doesn't cost a fortune (see point 3). You'll figure it out, but be ready to adjust your plans at a moment's notice — and get used to waking the baby up from naps on the regular.

2. Everyone Will NEED You at the Exact Same Time

One needs help with the potty at the same time the other is screaming about their lost shorts and the baby is crying in their high chair. All day, every day. It's like they know you're preoccupied so they double down on getting your attention by having the most important need ever. If I had a dollar for every time I've said, "One minute! I'll help you when I'm done with your sister/brother," I'd be able to afford that fourth bedroom I so desperately need.

3. You'll Spend More Money on Childcare Than Your Mortgage

It's possible all three of your kids will be in preschool or daycare at the same time, especially if you and your partner both work — which means insane childcare costs. Like, literally multiply that full-time preschool bill by three, and add a little on top for the nanny that the baby needs until they're old enough to go to childcare, and you have a monthly expense that'll bring tears to your eyes — or force one of you to quit your job (🙋‍) because it doesn't make financial sense.

4. Someone or Something Always Gets Lost in the Shuffle

One day, the baby is missing a shoe, the next, you forget about bringing the class snack for your oldest, and after that, you have to skip tot soccer for the middle because someone is sick. Twenty minutes after your oldest asks for a snack, you find a half-cut apple that you got distracted from because the baby needed a diaper change. You'll find an open book under the couch when you're cleaning up at night and realize you never finished reading it to your oldest because the toddler tripped on the rug and hit their head on the coffee table. At any given time, someone is getting the short end of the stick. It'll make 'em more resilient, right?

5. No One Gets Your Undivided Attention

It's legitimately hard to give all three kids real, quality attention. Day to day, you're just trying to make sure everyone's fed and avoid someone peeing on the floor that you don't even think about it. But then, randomly you'll realize it's been months since you really were one-on-one with any of them. Oh, and this applies to your partner, too (who hopefully isn't peeing on the floor!). Cue the guilt.

6. Dividing and Conquering Becomes the Norm

One parent takes one kid to a birthday party while the other stays home for naps. Two kids get dropped off at Grandma's while one parent takes the third kid to the grocery store and the other parent gets some work done. You hire a sitter for the baby so you can actually have fun going somewhere with the big kids. It's one never-ending game of tag team that, if you ever want to get anything done, you'll learn to love playing.

7. No Matter How Organized You Are, You Still Feel Frazzled

You might (read: need to) have some serious organization going on to keep your family afloat. Double Google calendars, a color-coded weekly planner, labeled lunchboxes, and a sophisticated hand-me-down storage system. But no matter how much you do have under control, you'll still feel frantic, disheveled, and like you're constantly forgetting something (or someone!). In my experience, you get better at thriving under these ridiculous conditions the longer you live it.

8. It's Harder to Go Anywhere

I'm not talking about vacations; I'm talking about going anywhere that isn't your home: the grocery store, the zoo, Supercuts, the park. Because even when you're with your partner or another adult, there are still more kids than grown-ups. And if you're solo with all three, your options are even more limited — which is why the fenced-in park in my neighborhood has become our second home. But despite the extra effort, it's absolutely necessary to pack up your whole crew and get out of the house, which is why you'll want to invest in the best double stroller your money can buy.

9. Your Expectations Will Go Out the Window

If you want to survive the insanity (and joy!) that is having three young kids, you must have zero expectations — of anything, really. Instead of getting your hopes up for a peaceful car ride home from preschool, just be happy if no one spills their entire lunchbox leftovers in the back seat. Instead of crossing your fingers for a tantrum-free family outing, celebrate if you don't lose any children. If you're brave enough to go out to eat, feel blessed if you make it long enough to get your food delivered to the table. The quicker you adopt low to no expectations, the quicker you'll adapt to life with three little ones.