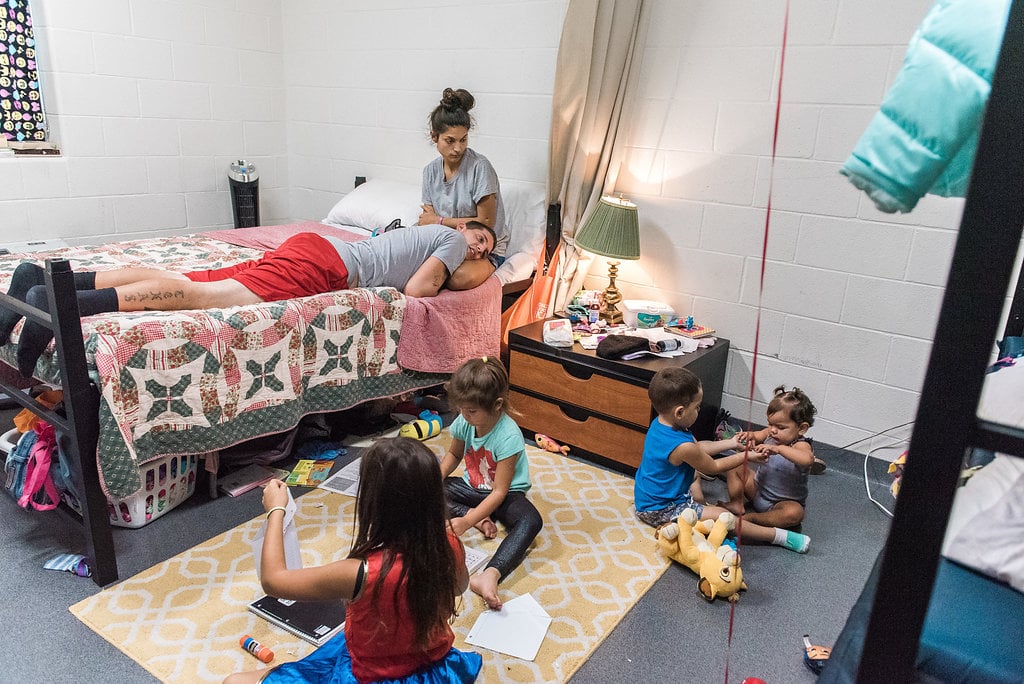 In an effort to get a better understanding of what it's like to be homeless with children, Sara Easter, a photographer from Arlington, TX, decided to walk a day in the shoes of the Henderson family, who has lived in a shelter called Union Gospel Mission of Tarrant County since July 2017. She spent the day with parents Jared and Dallas and their four children – Sadie, 8; Xoi, 5; Zander, 3; and Mila, 1 — and documented their every move. The final product was a photo series called "Sheltered," and it's beyond eye-opening.

Like most families who fall on hard times, the Hendersons were not planning for the unthinkable to happen. "The Hendersons ended up at the shelter after finding themselves homeless and with nowhere else to go," Sara told POPSUGAR. "Because they are a larger family, they did not have family or friends that could take them all in at once. They bounced around for a while before they found a shelter that had enough space open for all of them."

And although both Jared and Dallas admit it's not what they had in mind for their kids, they want to bring attention to homelessness in the US.

"I saw so many commonalities between the way this family interacted and my own family, as well as all the other families I've photographed."

"I met this particular family while volunteering at the shelter," said Sara. "We talked a few times before I ever photographed them. They felt strongly that it is important to increase awareness about this issue and were happy to share their experience to help do so."

As a mom of three boys, Sara explains that shooting the family going about their day really hit home with her.

"As a parent, it is much harder to distance yourself. I saw so many commonalities between the way this family interacted and my own family, as well as all the other families I've photographed. I witnessed these kids doing the same types of things all kids do: getting into trouble, irritating each other, helping each other out, being kind and reassuring to each other . . . For me that was the hardest part, I know what all of that feels like."

Sara hopes that her project will shed light on what it's really like to have your entire family live in one room and believes that showing a little compassion for families like the Hendersons can go a long way.

I would love it if these photos caused someone to just rethink their impressions of what it is to be a family experiencing homelessness. I think oftentimes people hear "homeless" and picture a man standing on a street corner with a sign, someone who possibly has dealt with mental illness or substance abuse. We don't often realize that there is also a huge population of people who don't have stable housing who are young families. These may be people your kids go to school with, people you see shopping at the grocery store, or even someone you work with. Homelessness takes many forms, as does parenting. I want people to look at these images and see that we are more alike than different. It's my hope that people can find glimpses of their own family in this series. I certainly did.