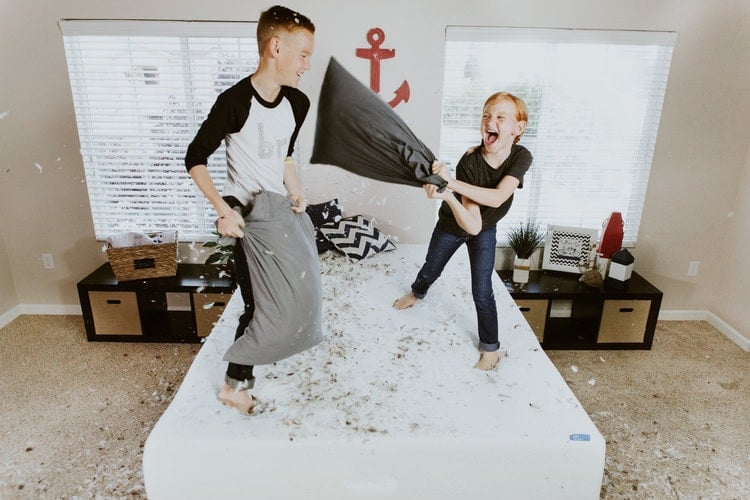 In some homes, kids share a room by choice (usually their parents'). In others, it's a necessity due to lack of space. In our house, my two small children, ages 5 and 3, share a room because they want to. At first, it was just an experiment. They asked if they could sleep in the same room, so for fun, we let them, but it blossomed into the two of them permanently sharing space. But because our 5-year-old is a boy, and our daughter is younger, I know it won't be like this forever.

If my kids were both the same sex and they never complained about not having their own space, I'd keep them there until they went to college.

My husband and I are done in the baby-making department, so whenever my kids are ready, they can each have their own room again. But for now, the fact that they want to be together makes my heart burst. Studies have shown that, for many children, sharing a room with their sibling or siblings is more about inclusion than anything else. Before they reach the age when they want their own space, kids just really love being together, which is definitely true for my little ones. At night, we usually have to remind them to stop chatting because it's time to go to sleep, and they definitely get into mischief if they get bold and close the door. It makes me smile thinking about their imaginations bouncing off each other as they talk under the covers and the cute little memories they make together when we're not there. It's a pretty cute gig, but when will I have to, or should, move one of them out?

Related:
13 Reasons You Need to Give Your Child a Sibling

Honestly, if my kids were both the same sex and they never complained about not having their own space, I'd keep them there until they went to college, but I have a feeling things will get a little dicey in a few years as they head toward puberty. To curtail this potential awkwardness, I plan on separating their rooms before the onset of puberty — around the time my son is 11. I assume they'll both be ready for a little privacy by then anyway. But if one of them expresses a desire to have their own room before that time comes, I'm open to that too. I don't plan on forcing them to stay together if they don't want to, because what makes their current setup so special is their equal happiness in being there.

Before separate rooms (and puberty, ah!) needs to be a concern of mine, I'll sit back and watch my kids grow . . . together. So far, their shared room has created so many more good memories than bad. Sure, they fight sometimes like all siblings do, but they're also incredibly close. They share better, are able to solve conflicts easier, and don't tattle on each other to Mom and Dad as quickly anymore. Their tastes and interests are different, but their room reflects each in a perfect balance. Nobody is upset about a certain toy being on a shelf or a certain color on their bed sheets. So unless they ask to be separated, they'll share a room for the foreseeable future. Because it's been an experiment that I don't want to know the outcome of yet.