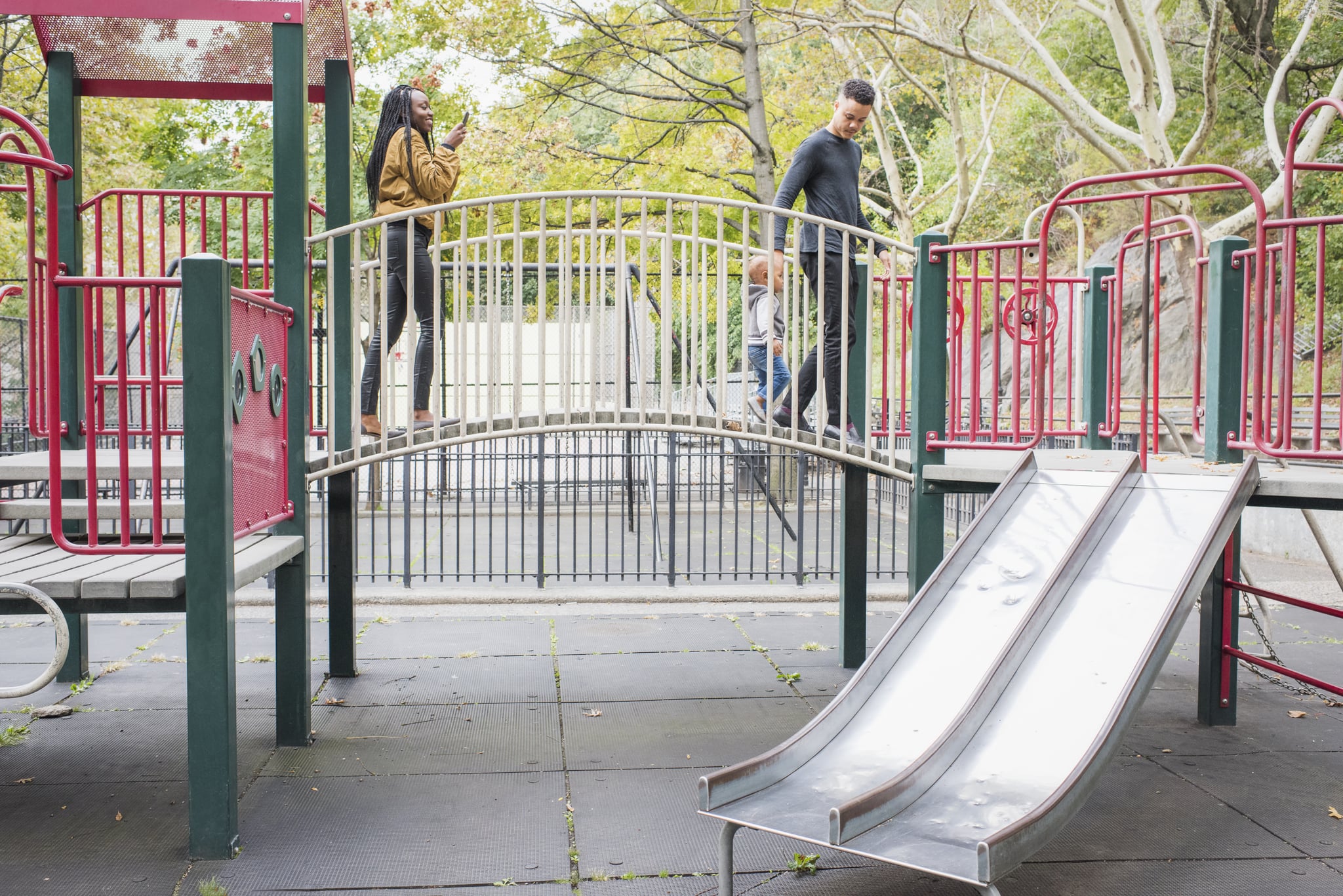 There are many times when I often wonder if my iPhone is my best friend or my worst enemy. In this day and age, I'm sure a lot of people could make that same comparison. A 2018 study conducted by Deloitte found that US smartphone owners check their phone a whopping 47 times a day. We'd be kidding ourselves if we didn't recognize smartphones for what they've become — an addiction. With our phones consuming so much of our attention these days, as a mother I found it necessary for my family to have designated iPhone-free zones. The one particular zone that I feel most passionate about? The playground.

Related:
For Burned-Out Moms, Is Texting the New Cheating?

I should seem obvious — I mean who has time to text their friends or check Facebook while chasing around kids? But I catch myself doing it more than I would care to admit. When my son was too young to walk or talk, our playground trips consisted of me pushing him on the baby swing for an hour or so. But after a few hundred times of him going back and forth, I'd get a little bored and reach for my phone. I found myself literally pushing my baby with one hand and texting my friends with the other.

"While catching my son at the bottom of the slide, I'd wonder if an anticipated email response had come through yet."

But when my son reached toddlerhood, and was running circles around the swing, I quickly realized that my days of feeling bored were a thing of the past. My new plan was to switch my phone to do not disturb while we were at the playground and only look at it when I needed to check the time (I've never worn a watch). But then, like anything else, our playground hours became routine, and I regressed back to my former iPhone habits.

I'd grab my phone to check the time and notice that I had a text. While keeping one eye on my son, I'd send a quick response. And since my phone was already out, I would proceed to check my email, Instagram, Snapchat, and whatever other apps I was into at the time. I'd feel the urge to look at my phone for no apparent reason. While catching my son at the bottom of the slide, I'd wonder if an anticipated email response had come through yet. I was physically present, but having my phone in my back pocket made me mentally absent.

Related:
My Son's School Made a No-Phone Rule For Parents, So Consider Us Rightfully Shamed

Then one day at the park, a little girl came running up to my son and I. She was was spunky, looked to be about 6 years old, and had an energy level that rivaled my son's (which is undoubtedly rare). The three of us were having fun and I was taking turns pushing both kids on the swings when suddenly it dawned on me that I hadn't seen a parent since she first popped onto the scene 30 minutes prior. I scanned the playground, desperate for a parental candidate. My eyes finally landed on a man in his mid 30s who was sitting on a bench and whose eyes were tightly focused on one thing: his phone.

"Is that your daddy?" I asked the little girl.

"I was physically present, but having my phone in my back pocket made me mentally absent.

That's when I realized that three years from now, when my son was that girl's age, I didn't want him to view me in that light. I was afraid that my minor habit would turn into a full-blown addiction. When I left the playground that day, I made a vow to myself. I promised to never let my phone distract me from the most important person in my life — my son. From that moment on, I left my phone in the car when we went to the playground. Removing it entirely from the situation ensured that it would not rival my attention. Some parents might ask, "What about photos? How do you capture photos if your phone is in the car?" I bring my camera (that isn't a smartphone) or I allow myself five to 10 minutes of picture-taking time with my phone and then I put it away. I believe that photos are important for us to look back on, of course, but they're not the key to making memories. Instead of spending so much time looking through a camera lens, I like to experience the moment as it's happening in real time. Because 10 years from now, that's what I'll cherish.