Amy Schumer is calling out fellow mom Natalie Portman for being a "liar" after the actor's parenting advice didn't quite work out for her. In an appearance on Late Night With Seth Meyers, Amy shared Natalie's parenting tip and joked about her son's age, name, and his ability to throw meltdowns at the playground.

When Seth asked about Amy and Chris Fischer's son, 21-month-old Gene, she launched into the awkwardness that comes with sharing your child's age by the month between birth and age 2. "Gene, um — I know he's older than 1, obviously," she tells Seth, who cracks up and asks if she simply can't remember her son's age. "No, I do know how old Gene is, of course — he's my roommate! The thing is, he's gonna turn 2 in May, but there's no way that's not annoying to tell someone how old your kid is . . . I have to do a math problem." She added: "So I've decided just to lie. Ask me again how old he is. [He's] 11."

Seth, who has two young sons himself, admitted that he finds he's constantly judging how he thinks he's doing as a parent and was curious if Amy personally feels like she's a good mom. "Actually, no, it's interesting," she said. "You don't know how good you're going to be of a parent and I got some nice advice from Natalie Portman, who was like, 'You have more instincts than you know you have.' And what I'm finding is that Natalie Portman is a huge liar! Because so far my instincts are all just dead wrong. And I've been reading this parenting book, How Toddlers Thrive, and usually, if Chris and I are going to leave Gene with the nanny, we sneak out . . . literally like a creep in a cartoon. Or I'll drop behind the couch and kind of do The Matrix — just so he doesn't cry and freak out. And this book, page one is like, 'Whatever you do, don't sneak out, that's really bad for your child.'" 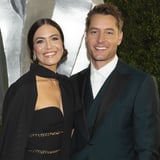 Justin Hartley Has Some Pretty Solid Advice For His Pregnant Costar, Mandy Moore

And this isn't the only way Amy jokes that she's failed Gene: the toddler's name was originally Gene Attell before she and Chris changed it to Gene David. "Not to mention that we did name him — by accident — 'Genital,'" she said of her son, who she shared is now in the Frozen-lover phase of toddlerhood (godspeed, Amy). "What sucks now, is you can never make fun of another kid's name. You know, a celebrity has a baby and they name it something stupid, you can't be like, 'Nice name, idiot.' Because it's like: 'Well, what did you name your kid Amy? Why didn't you just name him Ballsack Weiner? Weiner Tip? How about that, Amy?'"

Amy then got serious and shared that she's grateful for her friends and the fact that they can all share advice between them. However, she wishes her future self would do her a solid and come through with some advice every once in a while. "My instincts are really bad. They're really poor," she said. "You just have to live and learn . . . at first, we'd be at the playground or something and he would have a meltdown, and I just wish that Ghost of Christmas Future Mom Me could tell Ghost of Christmas Past Me Mom: 'Hey, you know how he's freaking out on the playground? Well, he's gonna do this so often that you're gonna become desensitized and not be able to feel it anymore, and that's something you can look forward to.'"

Watch Amy's hilarious full chat with Seth, during which they also discuss her Hellmann's Super Bowl commercial, in the video above.

Parenting Humor
An 8-Year-Old Impersonated How Her Mom Acts While Working From Home, and It's Spot On
by Murphy Moroney 18 hours ago