Pixar Studios is most well known for their stunning animated films, starting with Toy Story in 1995 all the way to the studio's newest release, Onward, which is now streaming on Disney+. All 22 Pixar feature films — and let's not forget about all those animated shorts — had hundreds of animators working for years to complete the story! Now, you and your family can see what it's like to animate with Pixar in a Box, a free online class held through Khan Academy.

Similar in style to Khan Academy's other online Disney class, Imagineering in a Box, Pixar in a Box will take your family behind the scenes at Pixar Animation Studios to learn how all of the artists at Pixar do their jobs, creating characters like Buzz Lightyear, Lightning McQueen, and Joy. Throughout the course, you'll be able to animate bouncing balls, just like the Luxo Ball you see in all of the Pixar films. You'll even learn how to make virtual fireworks explode in dazzling color. 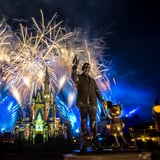 Kids will love learning how to animate various objects and scenes using subjects they learn about in school, including math, science, computer science, and humanities. The course will also show your family the different disciplines that Pixar has inside its studio, such as artists, scientists, animators, coders, and sculptors, plus how they use STEM (science, technology, engineering, and math) and the arts to create the films you love to watch together.

There are over a dozen modules with multiple lessons included in Pixar in a Box. The modules are organized in a similar sequence to how Pixar's animation teams create films, starting with the art of storytelling and leading all the way to rendering, which is the final step of any Pixar movie. Each lesson has a video to teach you about the subject matter, then a practice activity to be sure you know what to do.

Hop on over to the official Pixar in a Box Twitter account to see what other families around the world are animating, and once you get started, tag Pixar in a Box so they can share your creations!