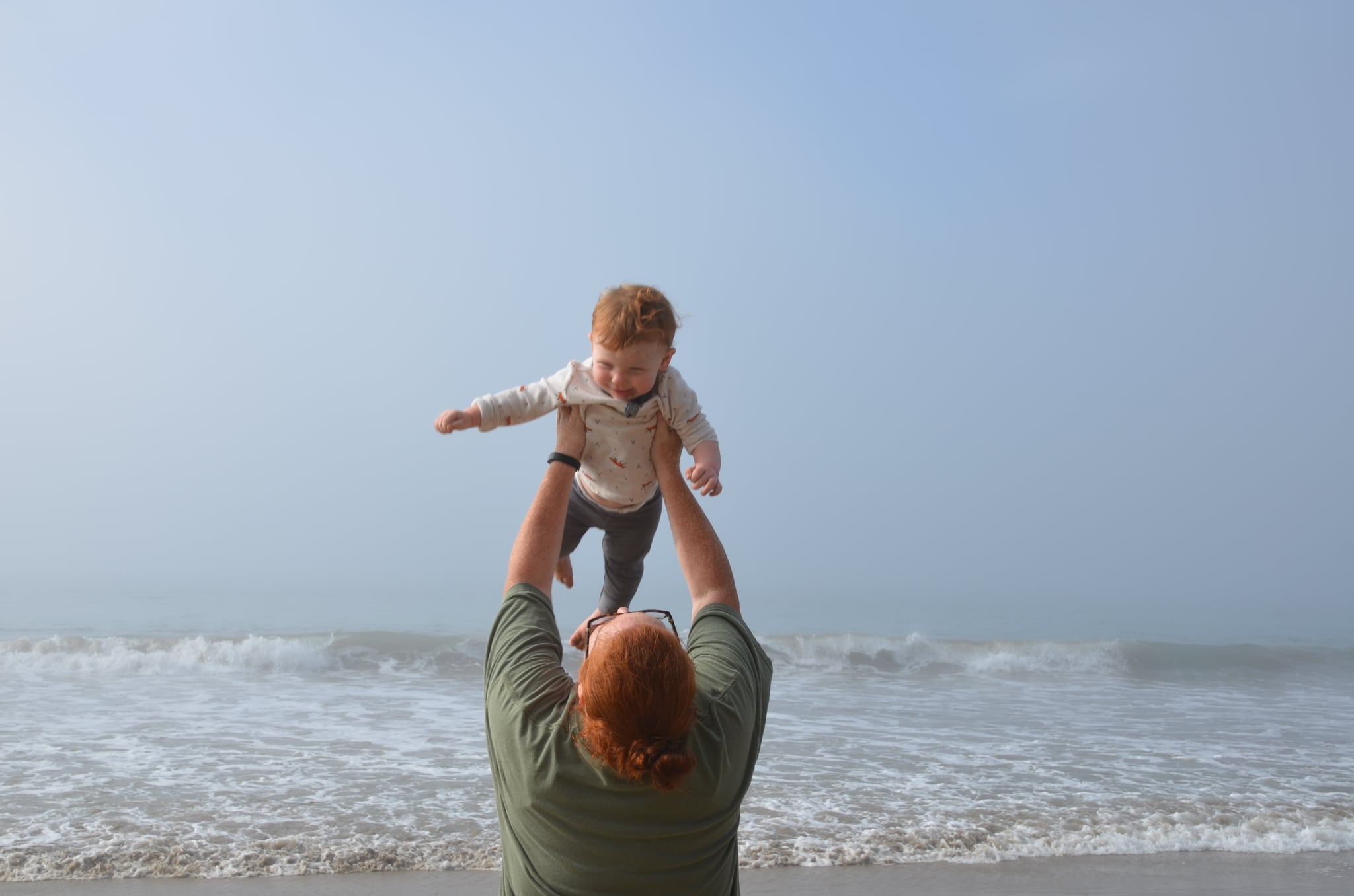 "Aren't you glad you didn't have twins?" My friend's words cut through me. I was venting about my baby girl waking me every 45 minutes at night when her response made me abruptly excuse myself. I had to hang up the phone before the tears started to flow.

I was supposed to have twins. I should have been complaining to my friend that there were two babies waking me every 45 minutes at night. Everyone who knew what happened seemed to be under the impression that since I was struggling with this new life with a newborn, I must be glad there was only one. After all, I'd finally given birth to one healthy baby — so I should be over the early loss of her twin.

The term describes an early loss in a twin pregnancy where one twin is miscarried but the other continues to grow and thrive.

The medical community refers to the pregnancy loss I experienced as vanishing twin syndrome. The term describes an early loss in a twin pregnancy where one twin is miscarried but the other continues to grow and thrive. You're only "half as pregnant" as you once were, but you're still pregnant. It's a strange dichotomy, where life and death coexist within a single uterus, and it's not as rare as you might think. The American Pregnancy Association reports that it affects anywhere from 20-30% of multifetal pregnancies.

My road to motherhood was not a particularly easy one. I fought hard to have a chance to see that beautiful second line appear on a home pregnancy test. As a same-sex couple, my wife and I were already at a bit of a fertility disadvantage. I also have PCOS, which further complicated our family expansion. After two years, 50 pounds lost, 7 IUIs, IVF, uterine surgery, and a frozen embryo transfer, I was finally pregnant. At six weeks, I had my first ultrasound; typical when you're working with a doctor specializing in fertility. The doctor was simply checking to see whether the embryo had implanted in the right place. In our case, we could see two tiny little dark spaces indicating that both of the embryos we transferred had implanted. Twins. Maybe. It was still early, after all. We weren't going to get excited until we heard heartbeats.

The next ultrasound was at the eight-week mark of my pregnancy and happened to fall on the day before Thanksgiving. I walked into the room feeling nauseous and anxious. Would we still see two? My doctor wasted no time getting to work, and it was clear right from the start of the ultrasound that both of those embryos had been busy growing. We stared at the screen in awe as we saw and heard the heartbeat of Baby A, followed by the heartbeat of Baby B. Definitely twins. Now we were excited (and terrified.) Mostly though, we were grateful.

I was too nauseous to eat our Thanksgiving dinner, but I was even grateful for my nausea. It felt like I'd never had so much to be thankful for. This was the first time I let myself relax and accept that I was actually pregnant with twins. After all our wishing and hoping for a chance to be moms, it was really happening. And we weren't just going to be moms; we were going to be twin moms. If felt like we'd been accepted into an exclusive club of some sort.

I immediately ordered a book about being pregnant with multiples and started reading it the moment it arrived. We started planning how we'd announce our pregnancy when the time came, and we busied ourselves by pinning everything twin-related that Pinterest had to offer. We even ordered two tiny little pairs of red Converse to use in our pregnancy announcement. 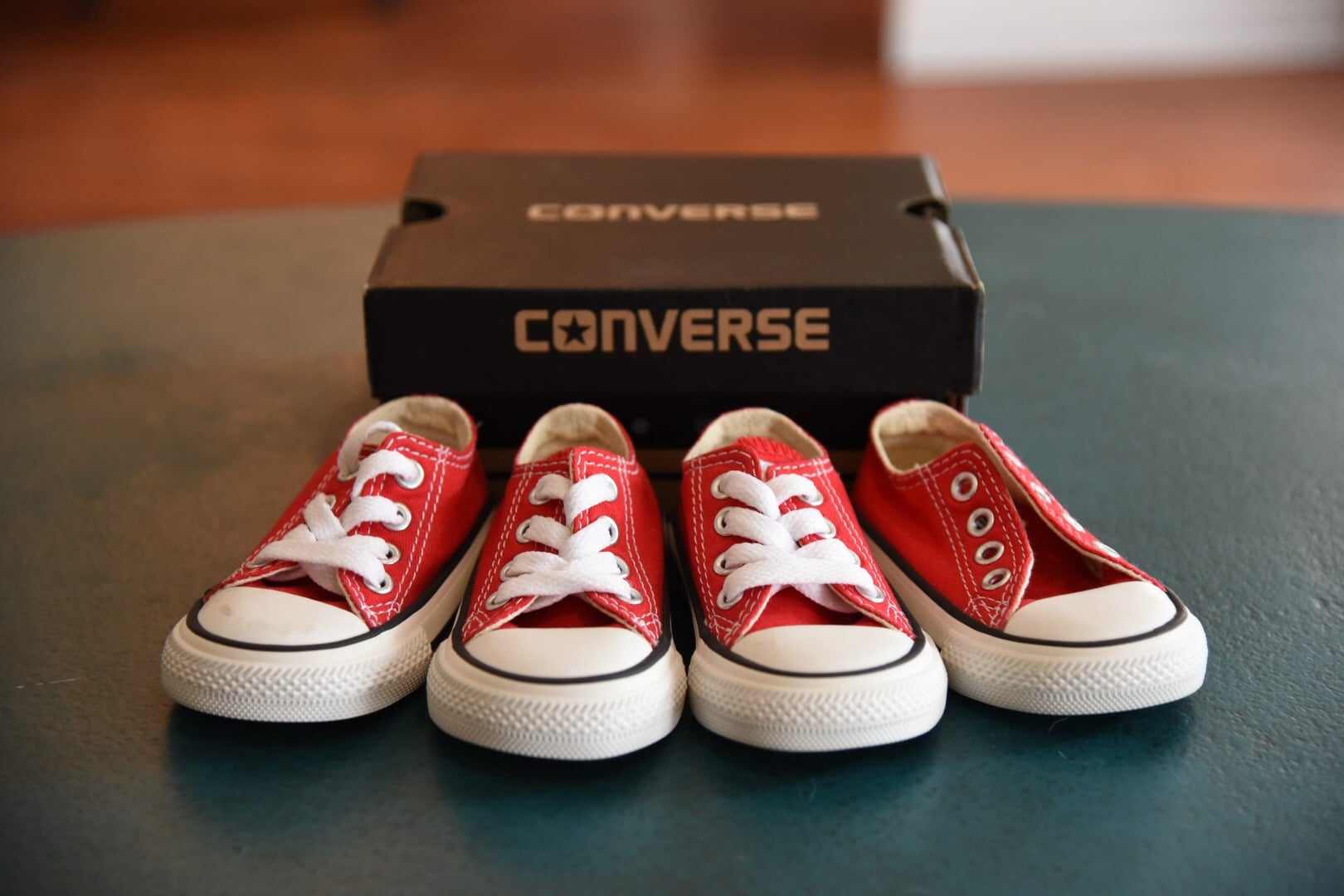 Soon, it was time for our third ultrasound. At 10 weeks, Baby A had clearly been growing, and we could hear the clear sound of that perfect heartbeat. At first glance, Baby B seemed to be a bit smaller, but I thought it might have just been the angle. It caught me completely off guard when my doctor turned to us and said, "I'm so sorry, but it appears that Baby B didn't survive long after your last visit."

For several ultrasounds following the loss, we would see the tiny space Baby B once occupied in my body become smaller until eventually, all we could see was our thriving Baby A.

The room spun. I stared intensely at the little ultrasound screen hoping to see something my doctor had missed. There was no flicker of a beating heart to be seen. Baby B was gone.

Most people associate a miscarriage with bleeding. Whether it happens naturally or with medical intervention, miscarriages generally result in the removal or shedding of the lining of the uterus and thus, the removal of any evidence of a pregnancy. I experienced some very mild spotting and a brief reprieve from nausea as my HCG levels fluctuated, but there was nothing about the physical experience that screamed "miscarriage" in the way that one might expect. It's different with a vanishing twin, because the cervix needs to stay closed for the remaining baby. Instead, the remains of the vanishing twin are reabsorbed by the mother's body over time, hence the vanishing part. In a way, I was fortunate that the loss happened early because a later loss puts the remaining twin at greater risk for complications.

I struggle with the terminology, because the word "vanish" implies that something is there one moment and gone the next — but that wasn't the case here. Baby B no longer had a heartbeat, but he hadn't actually disappeared. For several ultrasounds following the loss, we would see the tiny space Baby B once occupied in my body become smaller until eventually, all we could see was our thriving Baby A. There was no pain or bleeding; he was a like a shadow that faded until it was gone. I was still fairly numb in the doctor's office that day, and the feeling stayed with me until a few days later when a friend joyfully announced she was pregnant with twins on social media. I was sitting on the couch when I saw her post, and the next thing I knew, I was wrapped up in my wife's stoic arms, gasping for air between heaving sobs. The shock had worn off, and I felt all of the pain of our loss — and my frustration over the unfairness of it all — wash over me. My wife took her cues from me in handling the loss, and her status as my safe place never wavered. She held me when I needed comfort, but more importantly, she gave me the space to sit with my feelings. She allowed me to process the loss in my own way and in my own time, never expecting that there should be a certain point in time when I should be "over it" the way some did.

I wanted people to understand why I was so anxious and why I often spoke of my impending motherhood as an "if" rather than a "when."

The rest of my pregnancy experience was dictated by fear. I was more anxious than ever, and I lived for those ultrasound appointments where I could have confirmation that our remaining baby was still healthy. It took me a long time to be able to see my pregnancy ending with the birth of a healthy baby rather than simply ending. I wanted to feel positive and to exude that radiance that people associate with pregnancy, but I couldn't silence my fears.

I wasn't shy about telling people about the loss of Baby B when it seemed appropriate. I wanted people to understand why I was so anxious and why I often spoke of my impending motherhood as an "if" rather than a "when." Sharing taught me that most people have no idea how to help someone grieve an invisible loss. The only way I found around that was to keep sharing until the loss wasn't quite so invisible anymore.

Despite all of my worrying, our daughter was born perfect and healthy six days past her due date. I've never felt such intense joy and relief as I did the moment I heard her cry. She wasn't hypothetical anymore. Suddenly, I had this very real baby in my arms. It was the first time I was able to mentally separate her from Baby B.

It's been four years, and becoming a mother has been the adventure of a lifetime. Most days, our little family of three feels just right. Still, I think of Baby B often — and sometimes I still wonder what our family might have looked like as a foursome.