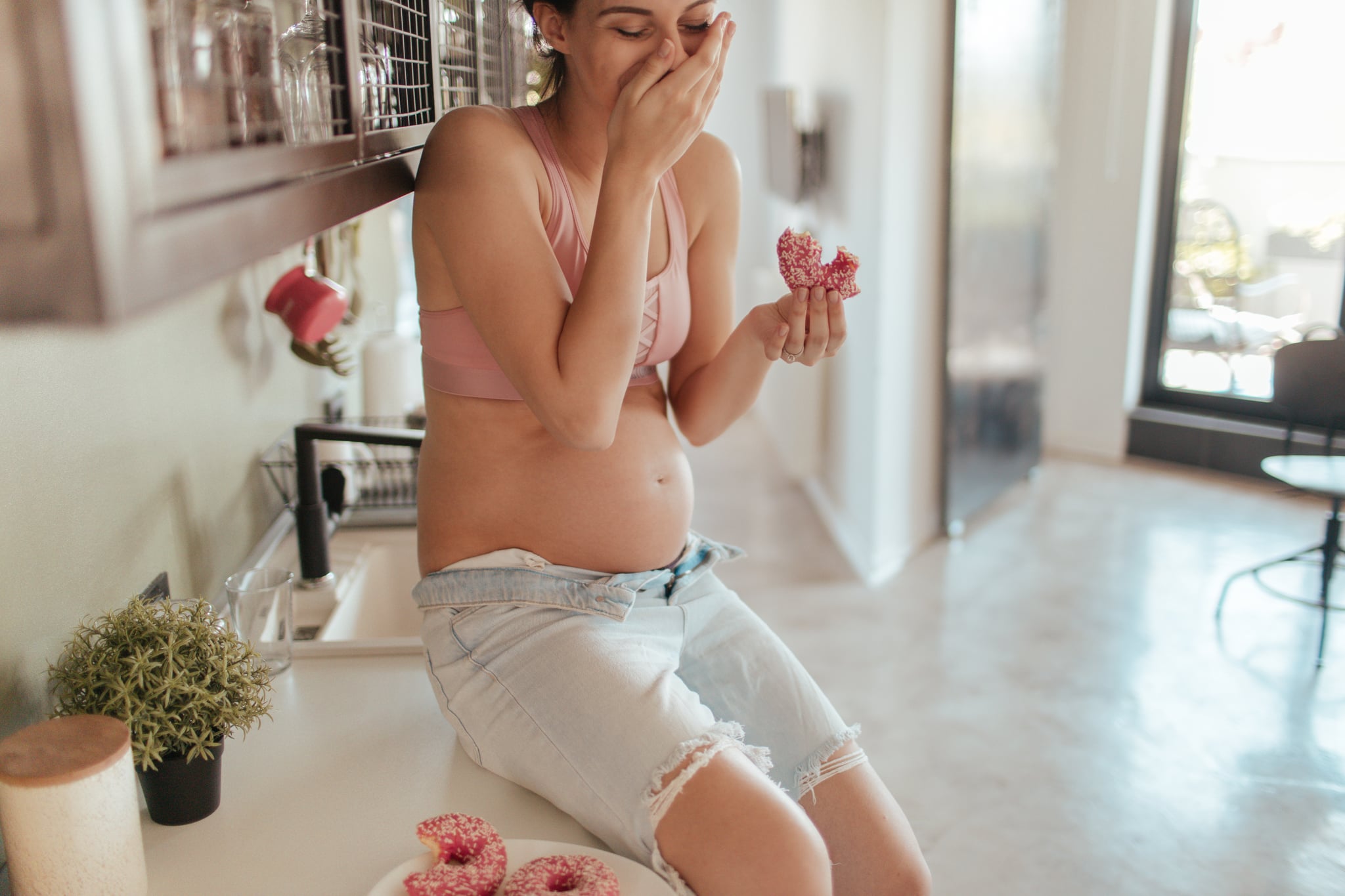 Like many people, I went into my pregnancies with grand plans to eat a balanced diet that nourished both my own body and my baby. I'm typically a healthy eater, so I figured that throwing in some extra organic produce and superfoods would be easy enough. Three pregnancies later, however, it's safe to say these plans flew out the window each time I reached the six-week mark and food aversions set in.

Twice, I also suffered from pretty intense nausea and regular vomiting, and once (thank you, middle child) the nausea was minimal, but I still experienced food aversions that made it impossible to stomach anything but refined carbohydrates for the first 12 weeks. It is not an exaggeration to say that my diet consisted of saltine crackers, bagels, mac and cheese, and copious amounts of chocolate until healthier options became slightly more palatable as the second trimester approached.

While I fully enjoy indulgences here and there, I felt incredibly guilty because I was well aware that consistently ingesting junk food without also balancing it out with healthier alternatives wasn't good for myself or my baby — yet the cravings for junk food and the aversions to anything green or animal-based were so strong that I was in survival mode. So, I set out to learn what the experts had to say about this phenomenon.

Why Is Junk Food a Common Early Pregnancy Craving?

As it turns out, craving junk food in early pregnancy is a relatively common experience. However, Emily Jacobs, MD, a fourth year ob-gyn resident at the University of Iowa, shared that a detailed scientific explanation is still lacking. "I remember when I was pregnant with my second child, all I wanted to eat was crushed ice and pickles," said Dr. Jacobs. "Flash forward one year later, and I haven't consumed either of those items since my delivery day."

One theory is that a pregnant person's nutritional deficiencies may be responsible for these cravings. A pregnant person craving salty foods, like potato chips and pickles, could be deficient in sodium, while those who have strong cravings for sweets might be lacking magnesium. However, according to Dr. Jacobs, this theory falls short because, for pregnant people in the United States, a balanced diet along with prenatal vitamins provide these micronutrients in the recommended amounts.

Related:
So There's a COVID Vaccine, but What Does That Mean For Pregnant People?

Since hormone levels are substantially altered during pregnancy, a more likely theory pegs hormones as the culprit for cravings. "Some research suggests that Neuropeptide Y (NPY), which stimulates the appetite, is increased in pregnant women in response to hormone changes," said Dr. Jacobs. "Couple that with the fact that pregnancy gives you a heightened sense of smell, which in turn alters your taste buds, and suddenly craving french fries for breakfast doesn't seem so strange."

Is Overindulging in Junk Food Dangerous?

Despite the guilt I felt for overindulging, Jonathan Cluett, MD, an ob-gyn resident at Queen's University, offered reassurance that giving your body what it is craving is not bad for the baby. However, he cautions that it's certainly better to eat a balanced diet since too many unhealthy fats and refined carbohydrates can lead to excessive weight gain, which could increase pregnancy risks.

The takeaway? Cravings are normal during pregnancy and, from a health standpoint, listening to your body is totally OK in moderation. The exception is if you're craving nonfood items such as sand, dirt, or clay, which can indicate a condition called PICA, which can develop during pregnancy. Your obstetrician should be notified right away, because it can indicate serious nutritional deficiencies.

In my third pregnancy I learned that if I'm feeling particularly nauseous and can't stand the thought of anything else, I need to let go of the guilt and remember that pregnancy doesn't always go according to plan — junk food included.

Image Source: Getty / AleksandarNakic
PregnancyHealth And SafetyNutrition
Around The Web