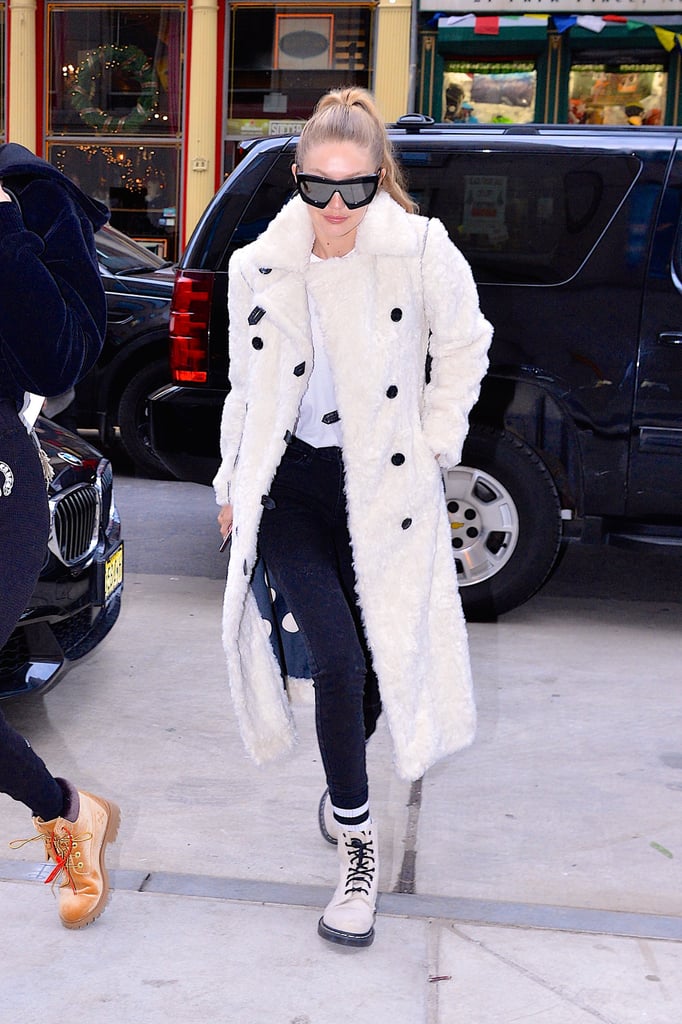 Gigi Hadid has a furry coat arsenal (exhibit A and exhibit B) that we're slightly envious of. It's hard enough to find one good option, and Gigi's found several! The model usually gravitates toward bright, colorful options, but for an outing with sister Bella in NYC, Gigi chose a neutral white coat from Maison Atia. Underneath, she wore a white top tucked into black pants and white Dr. Martens combat boots (she has a pair in red, too) with her socks peeking out.

But all that couldn't distract us from Gigi's Winter white outerwear, which featured prominent black buttons trailing down the front. When the star walked, we also caught a glimpse of the navy lining inside the coat — it was covered in white polka dots. This unexpected pattern made the outerwear a street style hit, and now, thanks to Gigi, we're trying hard to find a coat just like hers. Read on for similar selections to re-create her look.

Related:
Gigi Hadid Has Her Choice of Coats, and She Picked the Furriest One of All
0
previous images
-21
more images
Previous Next Start Slideshow
Gigi HadidWinter FashionCelebrity StyleModelsCoatsShoppingCelebrity Street StyleOuterwearGet The LookJackets

Mindy Kaling
Mindy Kaling Is Having a Lot of Fun With Her WFH Outfits, and We Wouldn't Expect Anything Less
by Nikita Ramsinghani 1 week ago