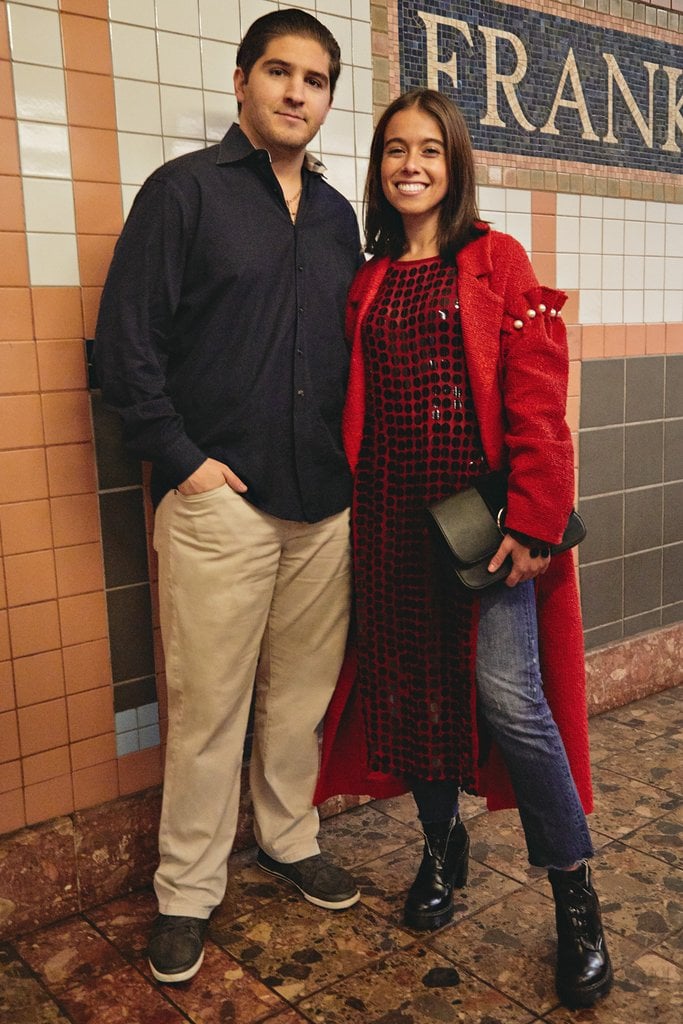 Before I took my boyfriend, Joey, to his first fashion show, we walked into a bar across the street for a quick drink. The drink was both celebratory (this moment would go down in history!) and precautionary (Fashion Week is chaotic, and let's just say Joey is not the type to stay calm in the midst of disarray). This season, a lot of shows were held in Spring Studios in NYC, which is a relatively small space to host a lot of people wearing outfits so bold, they are often quite voluminous.

Nevertheless, we proceeded into the mad rush for the Jonathan Simkhai show. We stood in a long, disorderly line outside in the rain, waiting to be checked in manually since the ticket scan machines were broken. Joey confirmed to me that he totally photobombed some girl's selfie because he couldn't really move. Once inside, we were ushered to a bank of elevators so we could be taken upstairs to the show space. We had to wait in a long line for this too, where Joey checked his phone and let me know we were now 20 minutes late for the show and "definitely going to miss it." I smiled knowingly and calmly explained that "these things start at least 30 minutes late — except for Marc Jacobs, which always starts on time — and last less than 10 minutes." I don't think he believed me, because later on he would confirm that he "seriously couldn't believe" all that hustle and bustle was all for a show that lasted, like, five minutes.

To my surprise, Joey did not make one comment about the clothes. I couldn't believe it, but as soon as we got comfortable in our seats and Joey took in his surroundings, he lit up like a kid in a candy store.

As we entered the show room and found our seats, I silently predicted what comments Joey would make as we watched the show. I thought he would probably scrunch up his nose and shake his head, perhaps saying something like, "How does someone wear that in real life?" — to which I would explain that a lot of designer clothes are styled with costume-like flair for the runway but not always merchandised in the same way once in stores. Maybe the models would be wearing heels, and Joey would wonder how they walked so fast or stayed on tempo in those shoes.

But to my surprise, Joey did not make one comment about the clothes. I couldn't believe it, but as soon as we got comfortable in our seats and Joey took in his surroundings, he lit up like a kid in a candy store, or like me when I'm walking down Main Street USA in Disney World. "That's Jamie Chung!" he said excitedly, pointing at the actress sitting across the way, posing for photographs. "Oh. Yes," I replied, completely unfazed. I have been attending fashion shows for four years, and it's not that I don't understand the idea of being excited by celebrities, but I've been around them quite often when on the job. I've come to consider actors and models as regular people like me (maybe not as short as me) who just have very public jobs and look really good most of the time thanks to makeup artists and hairstylists.

But Joey was starstruck, and I had never really seen him like this. I was intrigued. He wanted to take a picture of Jamie but felt awkward holding up his phone. Once the show started and models took the runway, I told him he could take a picture if he wanted, so he snapped one, then very quickly tucked his phone away into his lap. At this point, I was really just cracking the heck up, seeing as every other person in the room had his or her phone raised for pics. "It's OK, B. You can take pictures." "No, no, I got it!" he said, discreetly turning his screen toward me so I could make out the awfully blurry image of Jamie admiring Jonathan Simkhai's designs. (Fun fact: Jonathan designed one of Jamie's two wedding dresses!)

Related:
If You're Looking For Celebrities, They Were All at Paris Fashion Week

Fashion photography is probably not in his future, but that's OK. Anyway, that's when it happened. The moment that changed Joey's fashion show experience forever. He turned to the right and spotted a blond woman in a fine-looking white suit sitting in the front row. "That. Is. Kate. Upton," he told me with a very serious tone.

For the rest of the fashion show, I mostly just heard different variations of "that is Kate Upton" repeated in my right ear. I tried to distract Joey during the finale. "Which look do you think is my favorite?" He pointed to the fringed dress and I let him know that it was actually the pinstripe suit, but nice try. To which he replied, "Oh, but you like that boho fringy stuff" and also "that is Kate Upton."

Like music or sports, fashion is a shared hobby, and we can create a superintimate space around that. This intimate space where clothes are revealed is not open to everyone.

After Jonathan took his bow, and I told Joey that my favorite part of any fashion show is seeing a designer be applauded and appreciated for his or her work, the lights went on and Kate and Devon Windsor (who she was sitting next to) stood up, possibly to head backstage and greet Jonathan. People started begging for selfies with Kate, and Joey wondered if he should too. I told him to go for it, but the crowds were building, and Joey had definitely never taken a celebrity selfie before. I know he likes to excel at all things, and he probably felt nervous. What if he dropped the phone? Also, remember the blurriness issue?

We left the show and went on with our night, but I will always have an adorable photo of Joey at his first fashion show, realizing that he was in the same room as models he follows on Instagram or actors he watches in movies and on TV. The whole experience actually made me realize that, while attending fashion shows is just an enjoyable part of my job, a lot of people think it's totally awesome. The idea of sitting among editors, influencers, and celebrities with millions of followers is neat because these people are respected for their larger-than-life personas who most people admire from afar every single day.

Fashion Week is definitely cool for that reason — it really does speak to the fact that, like music or sports, fashion is a shared hobby, and we can create a superintimate space around that. This intimate space where clothes are revealed is not open to everyone. I am so lucky that I get to watch artists reveal their designs, which will very soon circulate on the internet, of course. Going to a fashion show is a unique experience for everyone: it's probably just as exciting for Kate Upton as it was for Joey, who still just can't believe he was so close to Kate Upton.

Not to sound super mushy, but to hell with it: Joey reinvigorated my love for what I do. He made something that has come to feel routine to me feel brand new and special. When I took this photo, Joey was thinking — yup, you guessed it — "that is Kate Upton." And I was thinking "that is Joey Grande, and I am so damn excited that I get to be at this runway show, sitting right next to him." 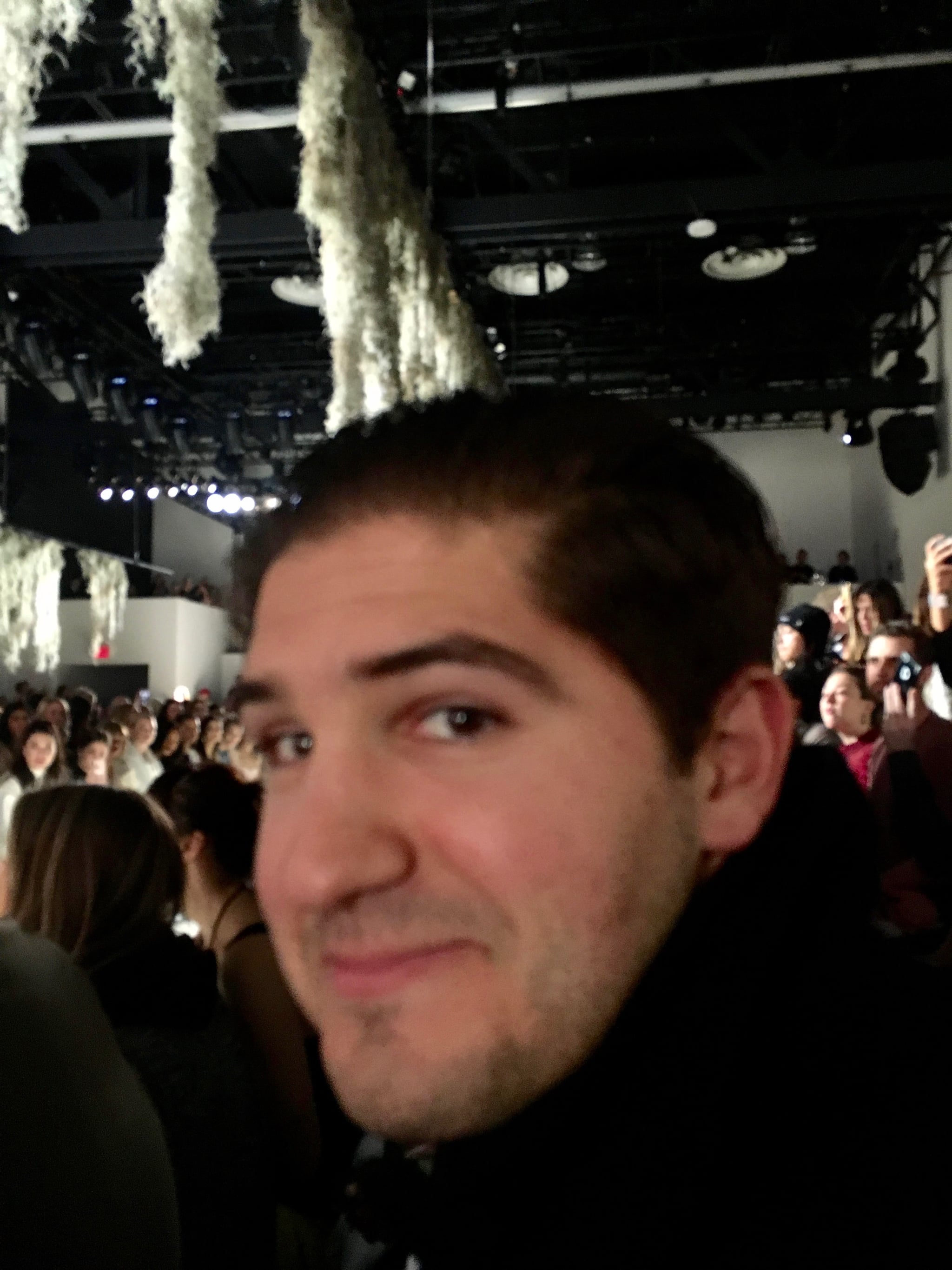 Health
I Was "Stealthed" by a Partner. More States Need to Make It Illegal.
by Ashleigh Gray 8 hours ago