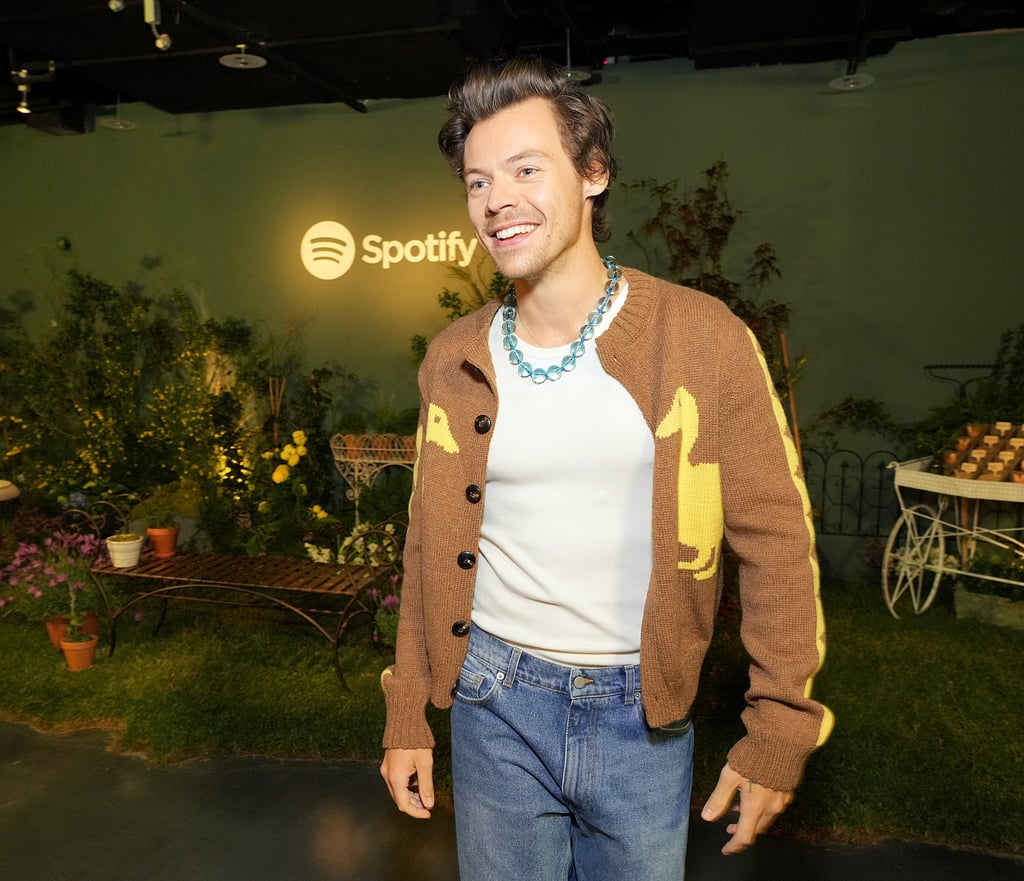 If there's anyone who can get away with a '70s-inspired outfit complete with a duck-stitched cardigan, it's Harry Styles. After three long years, Styles released his third album, "Harry's House," and he surprised a group of more than 100 fans at a Spotify party ahead of the release on Thursday, May 19.

For the event, Styles walked on set at an album-themed location in a custom cardigan by S.S. Daley in collaboration with knitwear designer Ruth Herring that featured two yellow ducks on each side. The brown sweater, which was a special order from the brand's fall/winter '22 collection, was complete with black buttons and a yellow checkerboard print down the sleeves. Styles, who works with stylist Harry Lambert, paired the sweater with a simple white T-shirt tucked into a pair of wide-leg jeans, adding a retro flair to the ensemble.

As for accessories, the English-born musician never shies away from wearing an array of bold necklaces, earrings, and rings. This time, Styles selected a chunky, light-blue beaded necklace by made-to-order Miami-based brand Éliou and finished the outfit with classic white sneakers. The singer's aesthetic matched the atmosphere, complete with a mirrored wall and vintage furniture.

Of course, this isn't the first time Styles has been seen channeling the '70s. Recently, he performed at Coachella wearing a rainbow sequined Gucci jumpsuit. His girlfriend, Olivia Wilde, is also a fan of nostalgic looks reminiscent of the same decade, as she was seen at CinemaCon in Las Vegas wearing a blue velvet power suit by Alberta Ferretti teamed with Styles's favorite necklace, a gold cross pendant on a simple chain.

Ahead, take a look at Styles's album-debut outfit from all angles and shop his exact necklace.

Related:
Here's What One Direction Members Have Said About Harry Styles Since They Split
Previous Next Start Slideshow
Harry StylesSpotifyMusicCelebrity StyleMenswearNecklacesSweatersJewelry