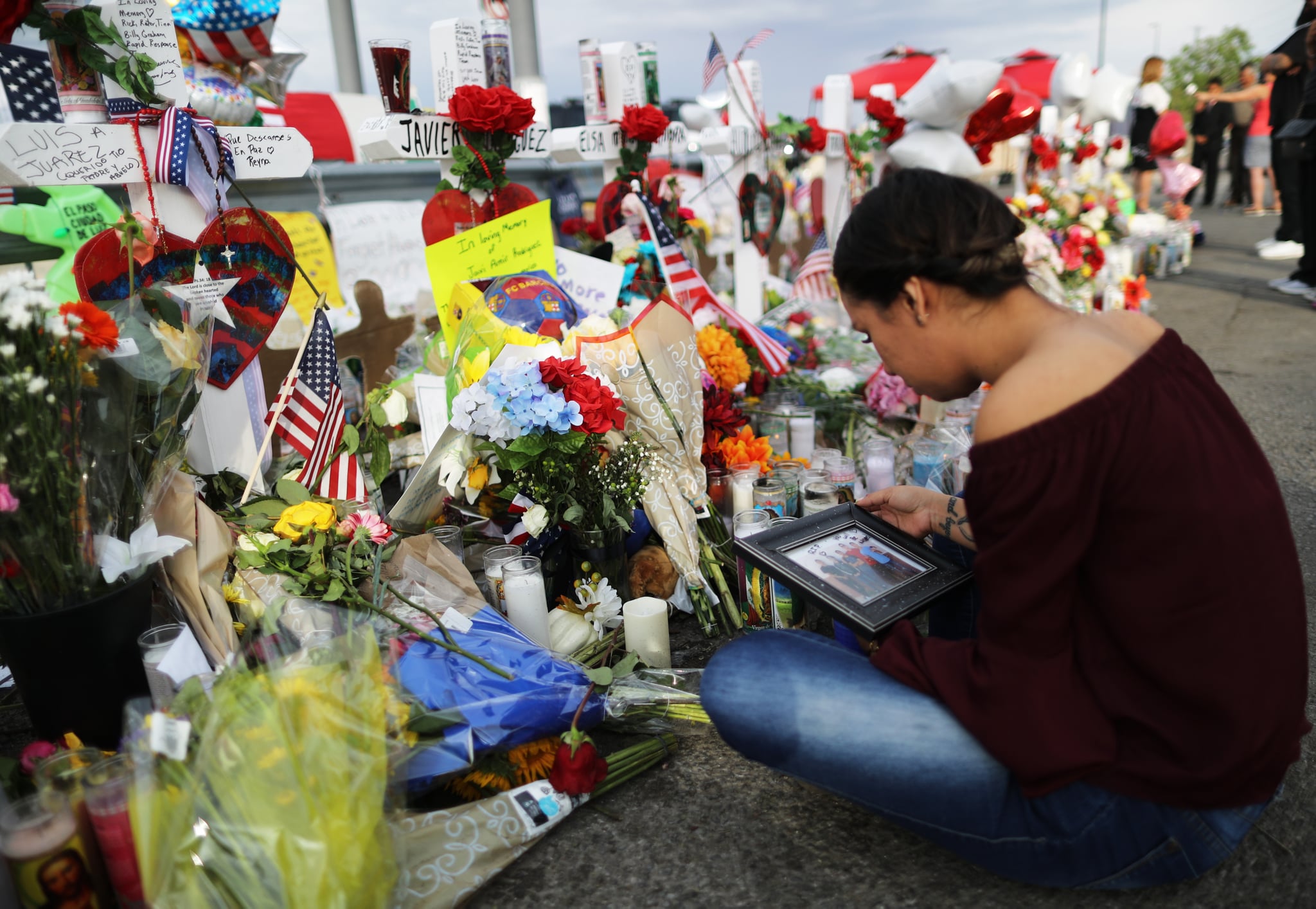 It's become a familiar routine in America in 2019: on the morning of Sunday, Aug. 4, I woke up to several news alerts illuminating my phone lock screen. There had been another mass shooting. This time in Dayton, OH, the city where my mom, uncle, and several cousins went to college. Just a mere hours after the deadly shooting in an El Paso, TX, Walmart that ended up claiming 22 lives. The death toll over both massacres reached 31; 31 innocent lives taken in two senseless acts of gun violence. It was reminiscent of waking up on Nov. 8, 2018, to the news that 12 people had been shot to death in a Thousand Oaks, CA, bar the night before, and on Oct. 2, 2017, to the news that over 50 people were killed overnight in a mass shooting in Las Vegas. I almost wrote "shocking" news. But that's the thing — it's not shocking anymore.

Like in the other dozen mass shootings that have occurred over the last two years, I was waiting for the rhetoric to turn to what it always does when this happens: mental illness.

"If you look at both of these cases, this is mental illness, these are really people that are very very seriously mentally ill," Donald Trump said on Aug. 5 in reference to the shootings in El Paso and Dayton. "Mental illness and hatred pulls the trigger, not the gun," he said in a later speech that day.

Related:
My Brother Has Schizophrenia, and Here's What I Want Other People to Know

In the wake of these tragedies, as the narrative shifts to mental illness, we are failing to confront the real problem: politicians and other high-profile figures frame mass killings as a mental health issue rather than a gun violence issue. But blaming shootings on mental illness has been a political talking point for decades, and mass shootings continue to happen. With no real mental health reform being enacted, it seems as though politicians are aware that the problem doesn't fall within the confines of mental health. As someone who has lived with a mental illness for half her life, the last five years of which being diagnosed as having bipolar II, I can tell you that blaming mass shootings on mental illness isn't just incorrect — it's irresponsible.

It's much easier to blame unthinkable acts of violence on something not many people understand — mental illness — than it is to confront the issue head-on.

It's much easier to blame unthinkable acts of violence on something not many people understand — mental illness — than it is to confront the issue head-on. But the reality is American women are more likely to have a serious mental illness than American men, yet the overwhelming majority of mass shootings in the US were committed by men.

The Washington Post cited two studies that highlight this discrepancy: a 2018 report by the FBI on 63 active shooters found that 25 percent had been diagnosed with a mental illness. And a study from 2015 found that of the 226 men they studied who committed mass killings or attempted to, 22 percent could be classified as mentally ill.

There's no denying that people who commit mass killings aren't mentally sound, and 17 states have "red flag" laws, which allow police to temporarily confiscate firearms from people who are believed to be a danger to themselves or others. And yes, some mass shooters may have struggled with a serious mental illness; the perpetrator who shot US Representative Gabrielle Giffords in 2011 and killed six others suffered from schizophrenia. But the research shows this is the exception, not the rule. "Anyone who kills someone else in a mass shooting scenario or otherwise is not what we would consider mentally healthy," Emma McGinty, PhD, a professor of health policy at Johns Hopkins University, told NAMI.org. "But that does not mean they have a clinical diagnosis and therefore a treatable mental illness."

Time and time again, domestic terrorists are motivated by misogyny, racism, and xenophobia. But misogyny, racism, and xenophobia aren't mental illnesses. There is a difference between the violent thoughts and inclinations of a disturbed individual and a diagnosable mental illness categorized by depression, mania, paranoia, psychosis, or hallucinations. Relying on the mental healthcare system to prevent mass shootings adds an undue pressure on mental health professionals who are working within the limitations of the DSM-5 (the handbook used by healthcare professionals in the United States to diagnose mental disorders), and what the law allows.

Related:
Depression and Anxiety Are on the Rise in Young People, but Is Social Media to Blame?

"The reason the mental health system fails to prevent mass shootings is that mental illness is rarely the cause of such violence," Amy Barnhorst, MD, who works as an emergency psychiatrist and is a professor at UC Davis Health, wrote in an op-ed for The New York Times. "Even if all potential mass shooters did get psychiatric care, there is no reliable cure for angry young men who harbor violent fantasies." To understand the difference between the mental state of mass shooters and a treatable mental illness, I recommend listening to an episode of The Daily podcast from February 2018 that features Dr. Barnhorst.

Every time we blame a mass shooting on mental illness, we add another layer of stigma onto an already marginalized population. People with a mental illness are more likely to be victims of a violent crime than perpetrators. In fact, only 4 percent of violent crime — not just shootings, but any violent crime — can be attributed to schizophrenia, bipolar disorder, or depression, according to a 2015 study.

It's time to move beyond the narrative that mental illness is the culprit. We are not the problem.

"Mental illness" isn't an umbrella term for people who do something morally wrong or violent or something you don't understand. In fact, mentally ill people with a gun are more likely to hurt themselves, not others. It's time to move beyond the narrative that mental illness is the culprit. We are not the problem. We are not your scapegoat.