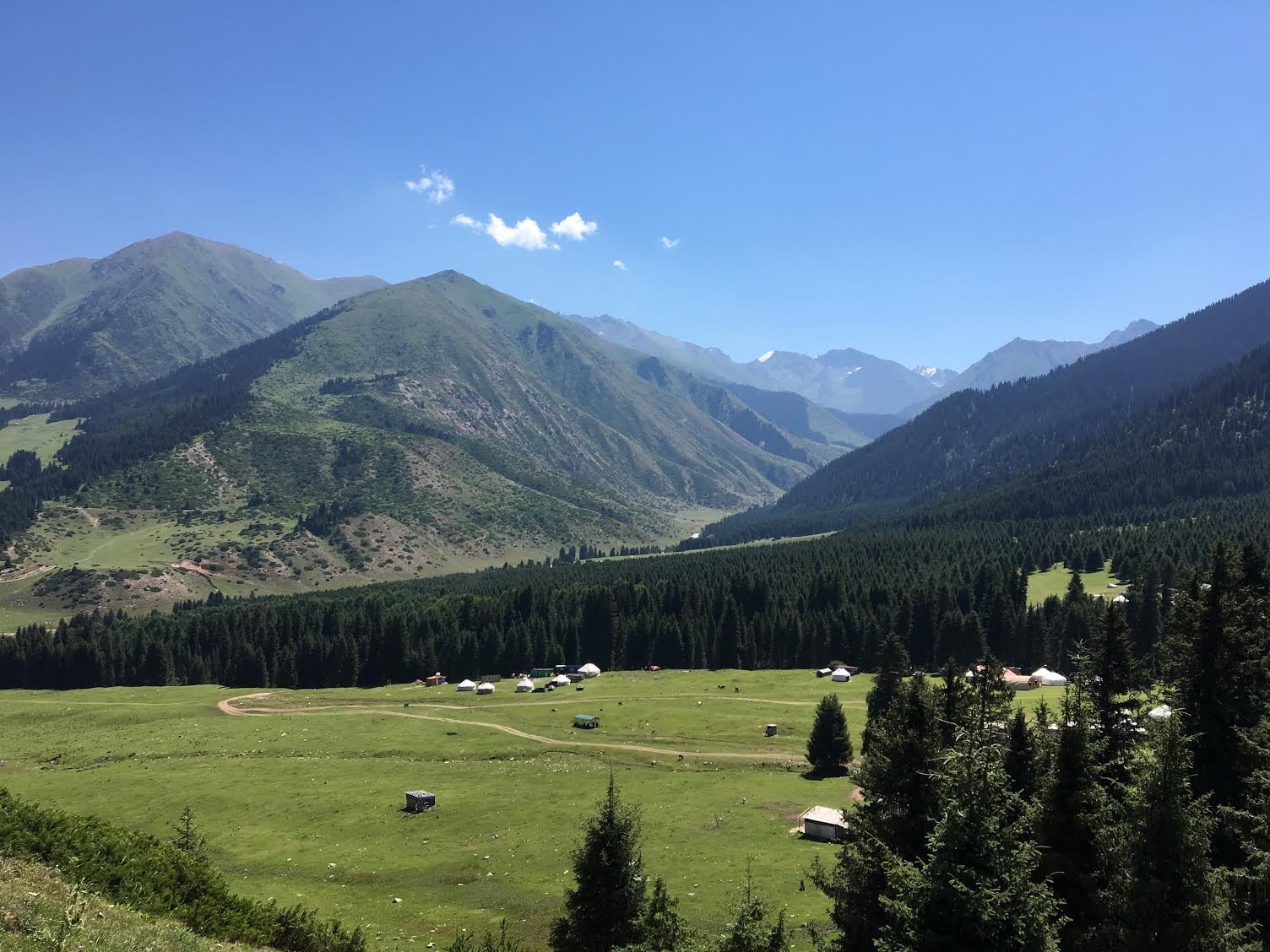 When I was 12, I decided I was going to try being a vegetarian. In fact, I can remember the exact time and place where I made this decision. My middle school was located in the Gramercy Park area of Manhattan, and we were allowed "out lunch," also known as the greatest gift a middle-schooler could ask for. At 11:30 a.m. every day, my classmates and I were turned loose for 50 minutes, hitting the pavement and fanning out along a roughly two-block radius from our school. One day in February 2007, on the corner of 23rd and Park Avenue South, certainly motivated by a constant desire to change my body, I blurted out to my friends, "I think I'm going to stop eating meat for a week." An impulsive diet choice became a new lifestyle, and as they say, the rest is history. One week turned into the past 11 years, during which I have largely abstained from the consumption of all poultry and red meat.

From the perspective of a Western palate, the cuisine of Central Asia can be surprising at times to some. Horse meat, camel milk, and fermented dairy products are among the traditional delicacies. Historically, Central Asian families were largely nomadic and therefore typically didn't have the time to cultivate gardens to grow fruits and vegetables as they simply weren't in the same place long enough to do so. A good part of the food that was readily available was, and still is, meat and other animal byproducts. Because of this history, the cuisines of Central Asia are undoubtedly meat-focused and, as a vegetarian, at odds with my personal dietary choices. However, my affinity for the region remains, and I am tasked with navigating the middle ground between my personal convictions and the vibrant foreign culture I surround myself with.

Related:
How I Built Body Confidence Through Traveling Alone

As a diligent traveler, I make it a point to learn about the places I visit so I have the context and knowledge to dig deep during these experiences. I often find myself stuck in a weird culinary predicament when visiting places that have a different understanding of meat as a food choice; I strive to show respect and open mindedness yet still work to maintain my personal ideology and preferences. In the case of Central Asia, a food culture deeply linked to meat and a culture at large devoted to animals, being a vegetarian is unfathomable. Having food preferences like mine is a privilege, something that is not lost on me. Privilege has enabled me to electively refuse a nutrition source the people of this region were brought up with and subsist on. I have thought about eating meat when I was traveling many times, when my diet proved to be frustrating, when I studied abroad in Istanbul and would watch my friends scarf down fragrant shawarma wraps after a night out, or every time a menu offered a single vegetarian option, to mention a few. But for me, I simply can't shake my distaste for meat. And so I continue on, walking a tightrope between a cultural palate that prefers meat nine out of 10 times and my own personal palate that does not.

I strive to show respect and open mindedness yet still work to maintain my personal ideology and preferences.

It was July 2016 in Kazakhstan, my first visit to Central Asia, and a friend and I were in the area surrounding the Khan Shatyr, a luxury shopping center housed inside a structure that is technically the world's largest tent, a nod to the nomadic history of Central Asia. It was Astana Day, a somewhat factitious holiday that celebrates the new capital city of Kazakhstan. In honor of the special day, a Kazakh village had been erected in some vacant fields, complete with XL yurts, performances, handy crafts for sale, and statuesque locals sporting traditional costume. On the outskirts of this event, rows of small cars from the '90s had their trunks propped open, with large, colorful plastic vessels sitting inside. I was certain I knew what was inside these containers. It was homemade kumis, fermented mare's milk, widely consumed and loved by the Kazakh people. Simply put, kumis is old horse milk that is so fermented, it carries an ABV of one to 2.5 percent.

From the first moment I set foot in Central Asia, I was prepared for a diet that differed greatly from mine. I also had managed to largely avoid confronting these foods up until this time, frequenting newer "European"-style cafes that catered to my tastes for most meals. Eyeing the containers of kumis and the crowds of people happily sipping plastic cups of the beverage, I figured this was as good of a time as ever to try some of this illustrious and well-loved beverage. My friend arranged my purchase of a small cup out of a kind woman's homemade stash. I brought the cup to my lips, took a sip, and struggled to swallow. My friend, an ethnic Russian born and raised in Kazakhstan, registered that I was not enjoying my beverage and whispered to me, "You cannot disrespect this drink. The Kazakhs live and die by horse milk. They will not be happy if they see you throw this out." He was right, and I knew I couldn't show outward signs of discomfort or distaste to the many people curiously watching me. I smiled to the woman I purchased the kumis from and backed away slowly. We wove between cars and people, my hand clutching the small white cup. My friend, though having grown up with kumis, similarly lacked a taste for it. We searched in vain for a trashcan, ultimately placing the cup on the ground between some cars, and disappeared into the shopping center as quickly as possible.

I felt terrible for not liking kumis and felt even worse for wasting what I had bought. But this experience made me realize that being immaturely grossed out and nonparticipatory in local food customs was not an option. If I were going to refuse meat, I would have to make some concessions to local culture and accept habits I wasn't as used to, just as my local friends accepted my choices even when they didn't fully understand them. As I spent more and more time in Central Asia, the lines I drew in the sand around food began to shift; while I still did not eat pieces of meat, I conceded to eating dishes that included meat in them, offloading nuggets of lamb or beef onto my dining companions' plates. Doing so opened me up to new options and allowed me to participate in some dishes shared among the table when dining. It was one of these shared dining experiences that led me to an instance that knocked kumis off its pedestal of most disliked food tried in Central Asia.

If you want to experience a new place, you should be open-minded to all of the aspects that make it different, food included.

It was August 2017, and I was in Bishkek, Kyrgyzstan. A neighbor of China to the east, Kyrgyzstan is home to a group of ethnic Chinese people, a few of whom make some of the best Chinese food I've ever had. A friend and I decided to go out for lunch to a Chinese place he liked. My friend was familiar with the cuisine, and I told him to order; he knew I didn't eat meat, and I trusted his choices. The menu included photos, and he pointed out what he had just ordered. Shortly after, the food came out and we tucked in. One dish appeared to be large noodles or tofu of some sort with strips of spicy tripe. Exactly what the nontripe item was, we weren't sure, but we ate it nonetheless. The white chunks tasted faintly of lamb, something I attributed to its preparation, and my friend assured me that it was OK for me to eat. The texture mimicked firm vegetable proteins I've had before in Asian dishes. I was happily eating another piece of the slightly spongy food item, picking around what I knew to be an animal product, when it became clear to me that this was neither tofu, nor vegetable protein, nor noodles. I called over the waitress and asked her, "What is this?," in Russian. When she responded with a word I didn't know, I had her type it into the Google search bar on my phone, urgently seeking an answer. Turns out, the word I didn't know was lung. I had been eating lamb lung, and not just a little bit. In a way, it was merciful that most people in the restaurant didn't speak English, so they didn't hear my exclamations of shock.

My stomach did a 360, all of a sudden becoming aware of the sensations taking place in my churning abdominal cavity. I was truly shocked, nauseated, and desperately wanting to remove what I felt sitting in my stomach. My friend had not ordered this intentionally, and he too was surprised. Once I realized I had been eating chunks of an organ, my appetite suddenly disappeared. We wrapped up the meal, and I hurried out of there. I had just unknowingly eaten something that I find revolting, but at the same time, I had to remain respectful of my surroundings. While I find lung unpleasant, many people, including those who were around me at this specific point in time, see it differently.

I have great respect for cultures and cuisines that utilize all parts of an animal, and in retrospect, I'm glad to see foods such as tripe and lung being served to restaurant patrons. I wasn't happy about what had happened, but after a few hours of a stomachache, I got over it and realized it wasn't such a big deal after all.

I have learned from these experiences, and I'm glad for the texture they bring to my travels. I have realized that as a foreign visitor, it is unacceptable to disrespect a culture's cuisine, no matter how strange it may seem to you. If you want to experience a new place, you should be open-minded to all of the aspects that make it different, food included. Items that are well-loved and commonplace in a country may not appeal to you, but as a visitor in someone else's home, it's important to show respect and not openly disparage them. It is a privilege to be there in the first place, an experience not everyone has the means to have. Discomfort can be a good thing; it forces you to grow and change. Confronting the foods (and experiences) that are different to you is what traveling is all about.