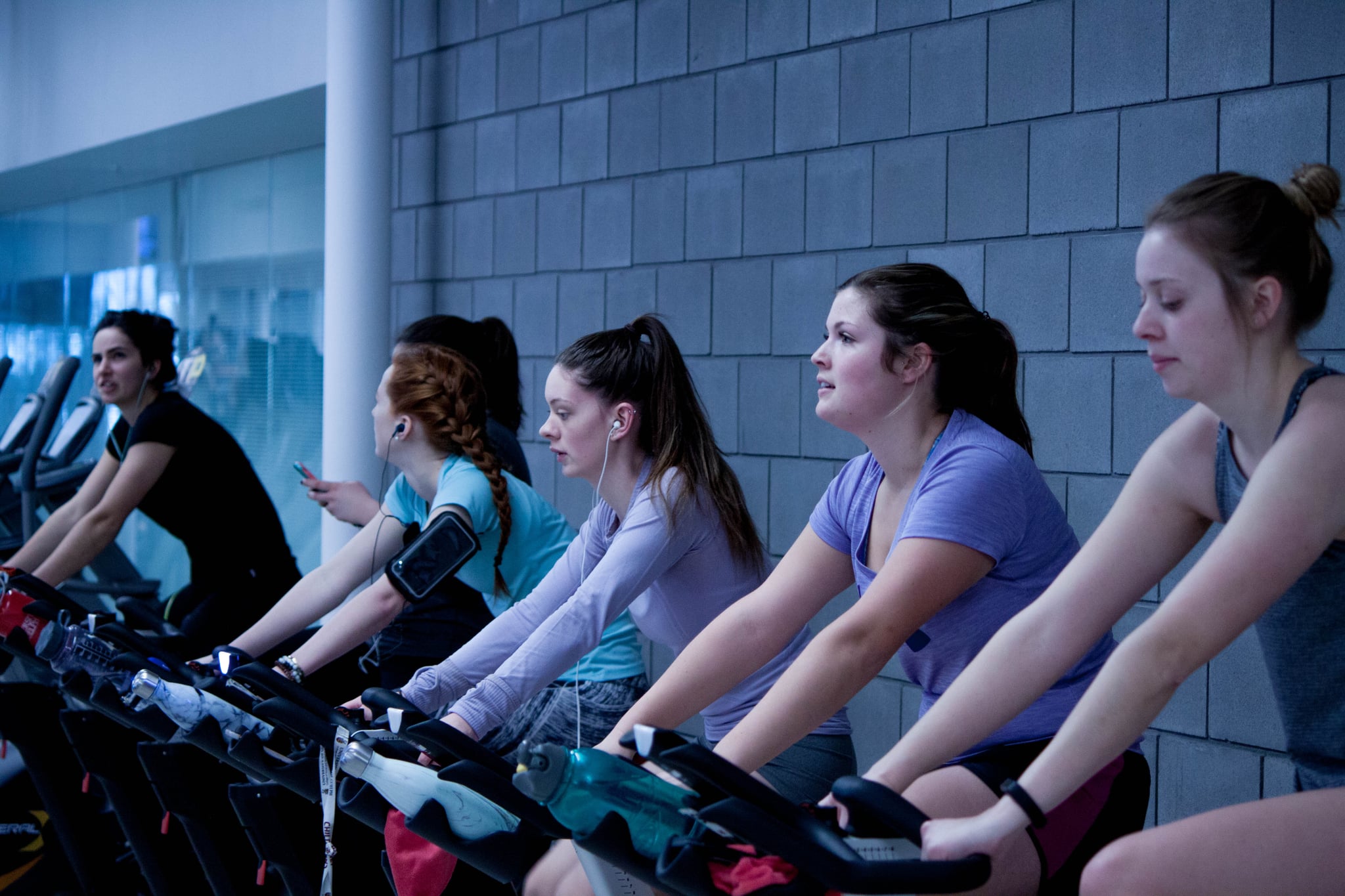 It was the end of June 2015 and I was rushing from work to get to a Spinning class. I had never taken a Spin class before, but since I had been running a lot, I thought I'd switch things up a little. During the class, I felt a little weird and sore but assumed that was because this wasn't a workout I was used to and carried on. I went to sushi after class with a friend of mine then went home, watched some TV, and went to bed. Sounds normal, right? Well, fast forward to 5 a.m. and I was in excruciating pain. I couldn't move my legs, I was sweating, and I was convinced I was paralyzed. I realize how dramatic this is, but just wait. It gets better.

Related:
This Cycling Expert Has the Answer For When to Prioritize Resistance Over Speed

I was in so much pain and positive I was going to die. I decided to go to my sister's, but the problem was that I lived in the basement of an apartment and the steps were incredibly steep and narrow and I couldn't bend my legs. Again, sounds dramatic, but imagine trying to bend a Barbie's knee to a 90-degree angle. It took me maybe five minutes to get up the steps, and I can't remember if I cried doing it, but I probably did.

When I got to my sister's, I tried and failed to sleep a little. It felt like someone was pulling my muscles apart, stabbing them with pins, and pouring scalding hot water on them all at the same.

A couple hours later, I called my mom to tell her what was going on. We were going to a concert later that night, so upon hearing the news that her daughter was "dying," she came into the city a little earlier to see what exactly was going on.

My muscles were breaking down so rapidly that my organs couldn't filter it out fast enough.

At this point, my legs were HUGE. My thighs had swelled to triple their original size. It was absurd. My mom was convinced it was lactic acid buildup. She said "lactic acid" so many times that day that it's now a running joke in my family whenever someone says it.

This next part gets a little graphic, so bear with me. Later in the day, I started to notice that my pee was brownish. To be honest, I didn't think much of it because I was so focused on my legs that I couldn't be concerned with anything else. A normal person might think the two are related, but not me. One thing I did learn from this whole experience though is if your pee is ever a weird color, go to the ER immediately. In this case, I obviously did not.

I didn't want to miss the concert, so we went. I couldn't bend my legs enough to get in the car, so we walked. Yep, walked. About a mile. A very slow, painful, awkward-looking walk.

That night, I still couldn't get comfortable and barely slept. Next day, same thing. The following day was Monday, so off to work I went. I walked a mile there and back. That night I had tickets to a Red Sox game with my dad and sister. And, you guessed it, walked again! For someone complaining of severe leg pain, you must be wondering how I did it all, and I don't really have an answer. All I can say is, very slowly.

Over the next few days, my mom talked to my aunt and told her all my symptoms. My aunt told my cousin, who called my mom and told her it was rhabdomyolysis and that people die from it. At this point, my mom called my doctor to make an appointment. My doctor said I should go to the ER immediately, so reluctantly on my end, that's what my mom and I did. This was five or six days after the actual class.

We went to the ER, and the doctor told me to drink lots of fluids and I should be fine. Then they did blood work, told me they'd call the next day with results, and sent me on my way.

I went home thinking everything would be fine and I'd just have to drink a lot of fluids. Well, that was NOT the case. They called the next day and said I had to come back in because my CK (creatine kinase) levels were off the charts. Literally. The test didn't go as high as my levels were. To give you some insight, the number should be below 100 for me, and the test went up to 2,000. Doing some simple math here, that's at least 1,900 above normal.

When I went back the next day, the words "dialysis," "admitted," and "days in the hospital" were thrown around, and I was overwhelmed. A doctor told me I'd be in the hospital a night, maybe two, and be fine. At this point, I was scared, overwhelmed, angry, sad, and confused. Basically, I was feeling all the feels.

I was admitted to the hospital under the impression I'd be there about one to two days max. As you may have guessed, that's not what happened.

[Disclaimer: I'm not a medical professional, so my explanation is based on what I was told.] You may be wondering what exactly was wrong with me, so here are the basics. I had rhabdomyolysis. This is when your muscles break down and enter your blood stream. I learned this is common for people who do CrossFit but can also happen if you overwork muscles and are dehydrated or have a crush injury, among other things. My case was kind of a fluke. My muscles were breaking down so rapidly that my organs couldn't filter fast enough. My kidney levels were abnormal, which apparently meant they were starting to fail. This is how people can end up on dialysis from this. Once your kidneys fail, everything else can start to go, and in extreme cases, patients die.

Related:
Exactly How Many Spin Classes to Take Weekly to See Results, According to Instructors

I am very lucky I didn't have to go through dialysis or worse. This was one of the worst cases the doctor or any of the nurses had seen or heard of, and the fact that I was able to make it through the previous five days without major complications was astonishing to them.

I spent four days in the hospital on fluids. I was a miserable patient, frustrated with the whole situation and, honestly, very scared. I asked to go home a lot, and on the fourth day, I did. About two to three months later, my levels were back to normal.

Long story short, I'm incredibly lucky. This all could have been so much worse, and I'm forever thankful that it wasn't. Not that many people know about rhabdomyolysis, but I think more people should. Something that could have cost me my life could have been just as easily avoided if I had sought treatment sooner. So, listen to your body, listen to your mom, and if your pee is ever discolored, definitely go to the ER.

Workouts
This Advanced Ab Challenge From Kayla Itsines Is Perfect If You Want to Push Yourself Hard!
by Jenny Sugar 1 day ago