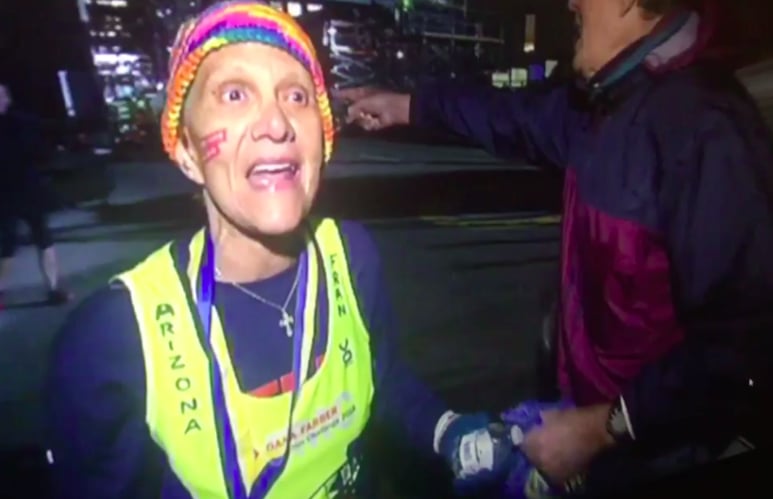 Seventy-two year old marathon runner and cancer survivor Fran Drozdz is proof that even if you place dead last in a race, you can still be #winning. She started her run in Monday's Boston Marathon at 11:30 a.m. Fran was on the course for more than nine hours ending her race at 8:45 p.m. and was the last person to cross the finish line.

Fran ran the marathon with a charity team to raise money for Boston's Dana-Farber Cancer Institute and in honor of her husband, Stan, who is currently battling cancer. Stan waited all day for his wife to complete the race, and worried his wife was either lost or injured, he called for police assistance as the race crew began packing up the event. His fears were allayed when he saw Fran approaching in good spirits followed by media. He helped her walk across the finish line and congratulated her with a medal.

This wasn't Fran's first time participating in a marathon, though. The runner has earned her nickname "Thunder Thighs" for running at least one marathon in every state in the country and is currently on her second round of the states. So next time you're out jogging for a few minutes and feel like stopping in your tracks, just remember that this woman did it — no matter how long it took her. Check out more of her story in the video below.

Healthy Living
After a Devastating Loss Last Year, I Began Running — and It Transformed My Life
by Michelle Edgar 2 weeks ago