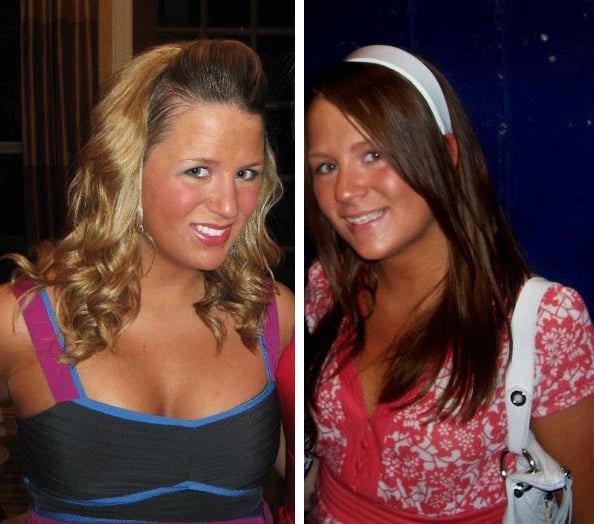 Although I was always pretty fair-skinned growing up, I was jealous of all the tan celebrities I saw in magazines and on TV. And since tanning salons were still popular in the Midwest well into the 2000s, there were many girls in my high school who were tan year-round. To keep up, I got into my first tanning bed when I was about 15 years old. The gym where I worked out also had a tanning salon, and since my family knew the staff well, they let me use the tanning beds after my workouts; I don't even think they knew how young I really was. I only went a few times back then and generally kept a pale complexion year-round, until the Summer before my senior year of high school.

I was hired as a lifeguard, and spending eight hours in the sun multiple days a week took a toll on my fair skin. I started out slathering on SPF 30, then 15, then 8. As my skin got used to the sun, I eventually didn't need it at all — I'm ashamed to admit this now, but sometimes I would spray tanning oil on my arms and legs to absorb extra rays.

Related:
This Video Will Ensure You Never Skip Sunscreen Again

Once school started and I spent most of my days indoors, I started visiting a local tanning salon. Not that often, but I would ramp up my visits before homecoming and prom, up to several times a week. It wasn't until I started college that my tanning habit became an addiction. The rec center on campus had a tanning salon, and since I was working out almost every day, I would finish my sweat sesh with a tanning session. It was like my reward for working out. I would tan almost every day to the point that I turned an orange color; I didn't even have a nice sun-kissed glow, I was obviously too dark for my natural complexion. I also didn't realize how tan I actually was. It was like a form of body dysmorphia; no matter how dark people told me I got, I still saw a pale person when I looked in the mirror.

I kept up these tanning habits on and off all throughout college. About halfway through my senior year, I finally snapped out of my tanning bed ways. Instead, I opted for spray tans and tanning lotions. The Summer after I gradated, I didn't spend too much time in the sun, and when I finally moved to New York, I got very little sun exposure.

But I still have freckles and moles all over my body. Last Summer, I found a suspicious spot on my hairline I had never noticed before; since it was a spot that didn't regularly get much SPF and I rarely wore hats in the sun, it made me nervous. When I went to the dermatologist, I had it biopsied along with another mole on my upper arm that was itchy and bleeding. My anxiety ramped up in the two weeks I waited for the results. Fortunately, they both came back negative for skin cancer.

Now that I'm almost 30, I'm constantly worried about getting skin cancer, thanks to the recklessness of my youth. The American Academy of Dermatology says exposure to natural and artificial UV light is a risk factor for all types of skin cancer, and exposure to tanning beds increases the risk of melanoma, especially in women 45 and younger.

I'm fortunate that I live in New York City and am rarely in the sun, but I still wear SPF 50 on my face every day. When I know I'll be outside for longer than a few minutes at a time, I slather SPF 50 on everywhere that's exposed. I go to the dermatologist multiple times a year and do a full-body scan to look for suspicious moles. I'm never not worried that a melanoma could pop up — my dermatologist told me even though I stopped tanning years ago, it could still happen.

I would trade all of the stress and anxiety of worrying about skin cancer to go back and spend my teens and early 20s being fair-skinned. It's not worth constantly worrying about getting skin cancer and checking my body obsessively for moles. I also am trying to reverse all the sun damage I inflicted on myself at such a young age with serums, creams, and facials, but once wrinkles set in, you can't really get rid of them (except for Botox, which I see in my near future).

Although tanning beds aren't as popular now as they were in the mid-2000s, I hope teenagers take extra precautions when they are outside in the sun. Pale skin is beautiful, and no tan is worth the risk to your health. Plus, if you are looking to get a little color, spray tans and bottled tanning lotions look natural and are a skin-safe option (I'm obsessed with St. Tropez tanning foam). Don't be like me: practice safe sun exposure. Your skin, and your peace of mind, will thank you.

Health
I Was "Stealthed" by a Partner. More States Need to Make It Illegal.
by Ashleigh Gray 11 hours ago

Pregnancy
Is It Safe to Take Allergy Medication While Pregnant? Experts Weigh In
by Devan McGuinness 3 days ago