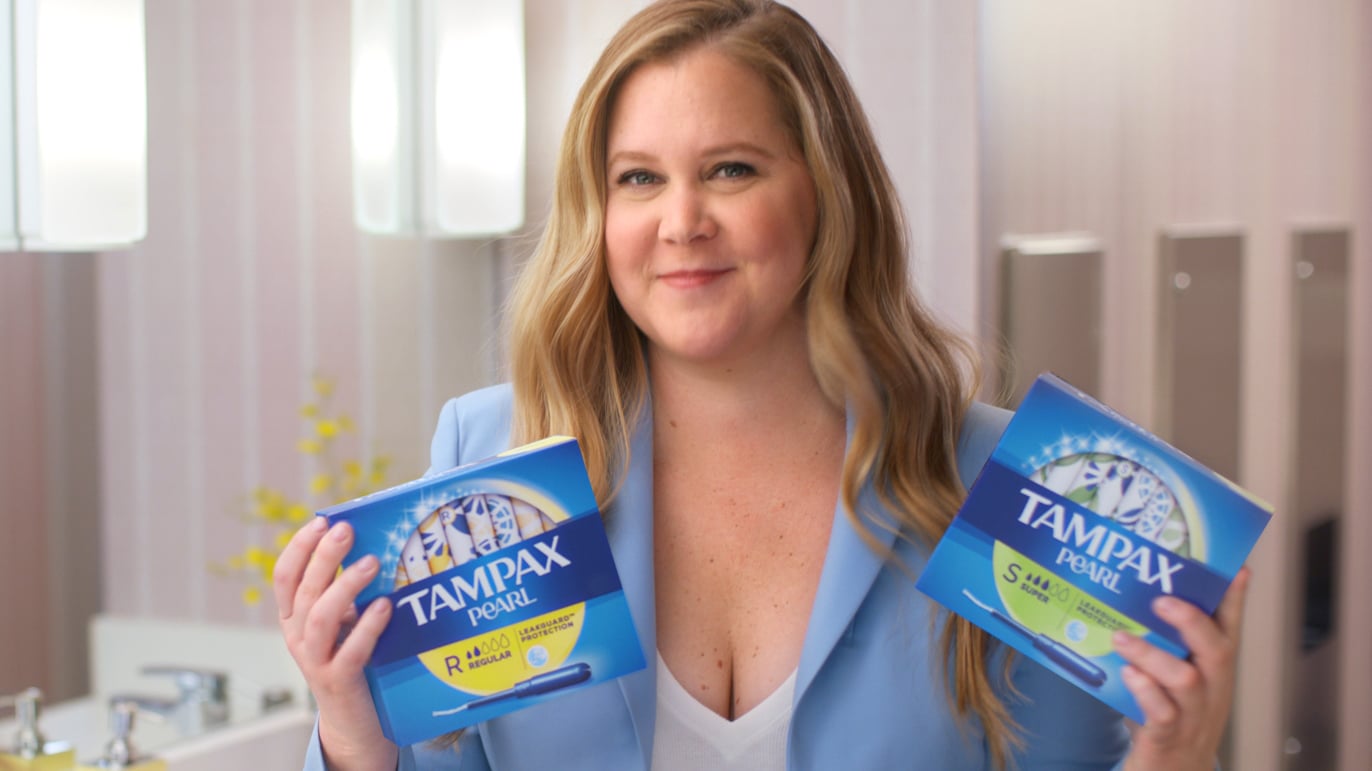 Do you remember the first time you used a tampon? Actress and comedian Amy Schumer said she was taught how to put one in when she was younger by her friend and she, in turn, was able to help others. Plus, she added, in "probably only the last 10 years, I knew how far to push in a Tampax." She told POPSUGAR that she also got most of her own sex education from asking her mom "if people could have sex with their clothes on" after an episode of Beverly Hills, 90210. Sounds about right.

Schumer's health classes, she said, did not cover it, so it was up to her to learn. That's the problem — in the US, not all states mandate sex education. As of June 2020, only 17 states require schools to teach sex and HIV education that is medically accurate and 29 states require that abstinence be stressed.

"I think we should be able to scream about it from the treetops."

Schumer has teamed up with Tampax to start educating the public about vaginas — "to just inform women what's going on with their bodies and to not be ashamed" — because, for so long, we've been subjected to myths and fear-mongering about our bodies, she said. It's often viewed as taboo to talk about these things. "I think that's a straight up like patriarchal symptom, and it's because white men have been running everything for so long, and women are taught to hate women and resent their own bodies," Schumer said.

One myth Schumer has heard over the years? She heard that inserting a tampon is the same thing as losing your virginity. In fact, according to the 2020 Tampax Period Education Survey, one in 10 adults believe that fact, and 94 percent say they don't know how many days the average menstrual cycle lasts. Watch a fun video that Schumer made for Tampax discussing some other myths ahead.

Schumer gave birth to her son, Gene, in May 2019, but if she were to have a daughter, she said, she'd want her to know "that she should be entitled to all of the feelings that she has." When it comes down to it, being a woman in this world, she said, is hard. "I wouldn't want to lie to her because it's harder for women, and the hardest for women of color."

Schumer pointed to the fact that, oftentimes in the medical field, women aren't believed. "We may get less pain medicine, and women of color aren't listened to at all, basically." One 2001 study explained that, "in general, women and minorities receive less analgesic than men and nonminority patients undergoing similar medical procedures." A 2017 article published by Harvard Medical School stated that 70 percent of people who experience chronic pain are women, yet 80 percent of pain studies are conducted on male mice or human men. What's more, the racial disparity in healthcare is evident and has been widely reported.

Through it all, Schumer is about embracing the badass-ery of womanhood no matter who you are. Women, Schumer said, are supposed to minimize their experience, but "our physical ailments and all of the pain that we have to go through monthly and then to bear children, it's something that men definitely could not handle. And not only do we have to handle it, but we're supposed to do it with a smile and then do it again and act like it's all fine and normal." This, she said, isn't fair. "I don't think we should have to hide it. I think we should be able to scream about it from the treetops."