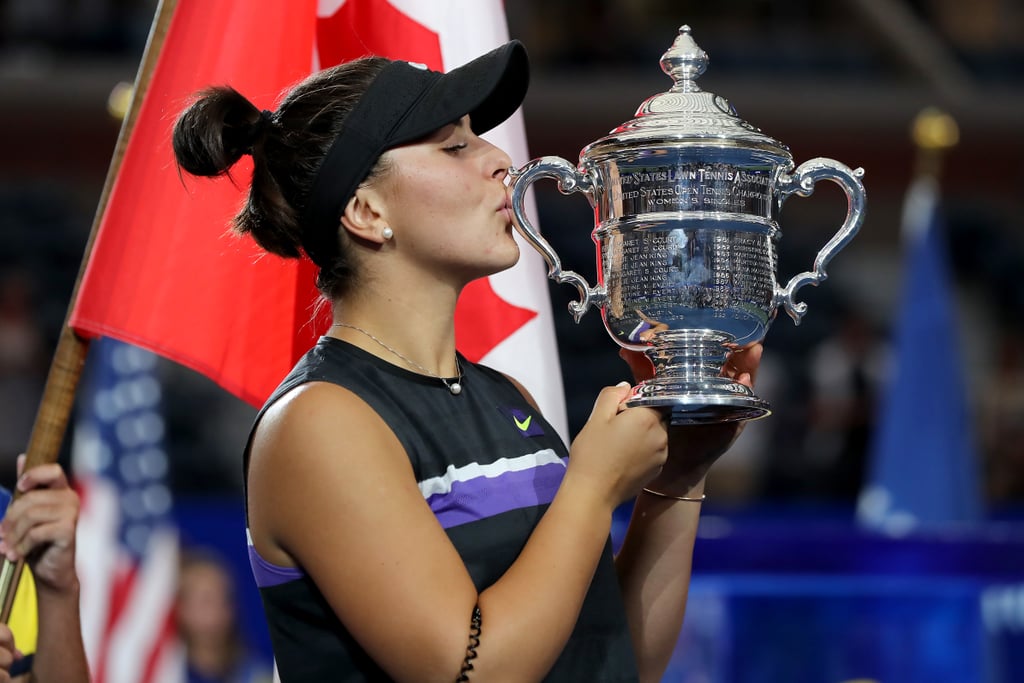 Despite Her US Open Loss, Serena Williams Still Makes History Alongside an Amazing Teen

In 1999, when Serena Williams won her first Grand Slam title at the US Open, Bianca Andreescu hadn't been born yet. But on Sept. 7, the 19-year-old Canadian came out victorious against the 20-year veteran and a woman she's called her idol. Bianca beat Serena, who turns 38 this month, 6-3, 7-5. The match was intense from the start, and Bianca had the first two games secured in her back pocket easily. It was her first-ever Grand Slam final, and she was versing one of the sport's greatest icons, but she didn't show visible nerves even when Serena rallied hard during the second set. Both played powerfully and fiercely — you could see it on their faces and in the way they fought for points — and both players made history at this tournament.

Serena, who wasn't able to tie Margaret Court's record of 24 Grand Slam singles titles this time around, said after the tournament that Bianca played an "unbelievable match," and she personally was fighting to stay out there. "Honestly, the fans started cheering so hard, it just made me play a little bit better and fight a little bit more, so I was really grateful for that," she shared. This was Serena's 33rd Grand Slam singles final and the fourth time she made it to a major singles final since the birth of daughter Alexis Olympia in 2017 (this past July, she lost in the Wimbledon final against Simona Halep). "I just feel really honored to be out here, and I'm just so proud that I'm still out here competing at this level because it's not easy, you know what I mean, in this particular sport for 20 years," she said.

Bianca said of her victory, "It's so hard to explain in words, but I'm just beyond grateful and truly blessed. I've worked really, really hard for this moment." This time last year, Bianca was ranked 208th. Now, she's made history for her country. "I can't complain," she said. "This year has been a dream come true, and now being able to play on this stage against Serena, a true legend of the sport, is amazing." (She talked more about what it meant to verse Serena in an emotional press conference after the award ceremony, which you can watch here.)

Bianca said that winning wasn't easy, though she's proud of how she dealt with everything. "Obviously, it was expected for Serena to fight back. She's done that so many times in the past — that's why she's a true champion on and off the court." Bianca admitted that last year was a struggle for her because she was going through injuries, but she told herself to never give up, and she persevered. "I just kept believing in myself, I kept working hard, and I just kept that momentum and confidence throughout this whole year, and hopefully, I can keep going," she said. Bianca dedicated her win to her teammates and, looking toward her parents in the crowd, she concluded, "It's been a really long journey. I mean, maybe not so long, I'm only 19, but it hasn't been easy, so I just have to say thank you, and let's keep going!"

Related:
Meghan Markle Was a Sight to Behold at the US Open — Game, Set, Match
Previous Next Start Slideshow
WorkoutsSerena WilliamsTennisUS OpenAthletes