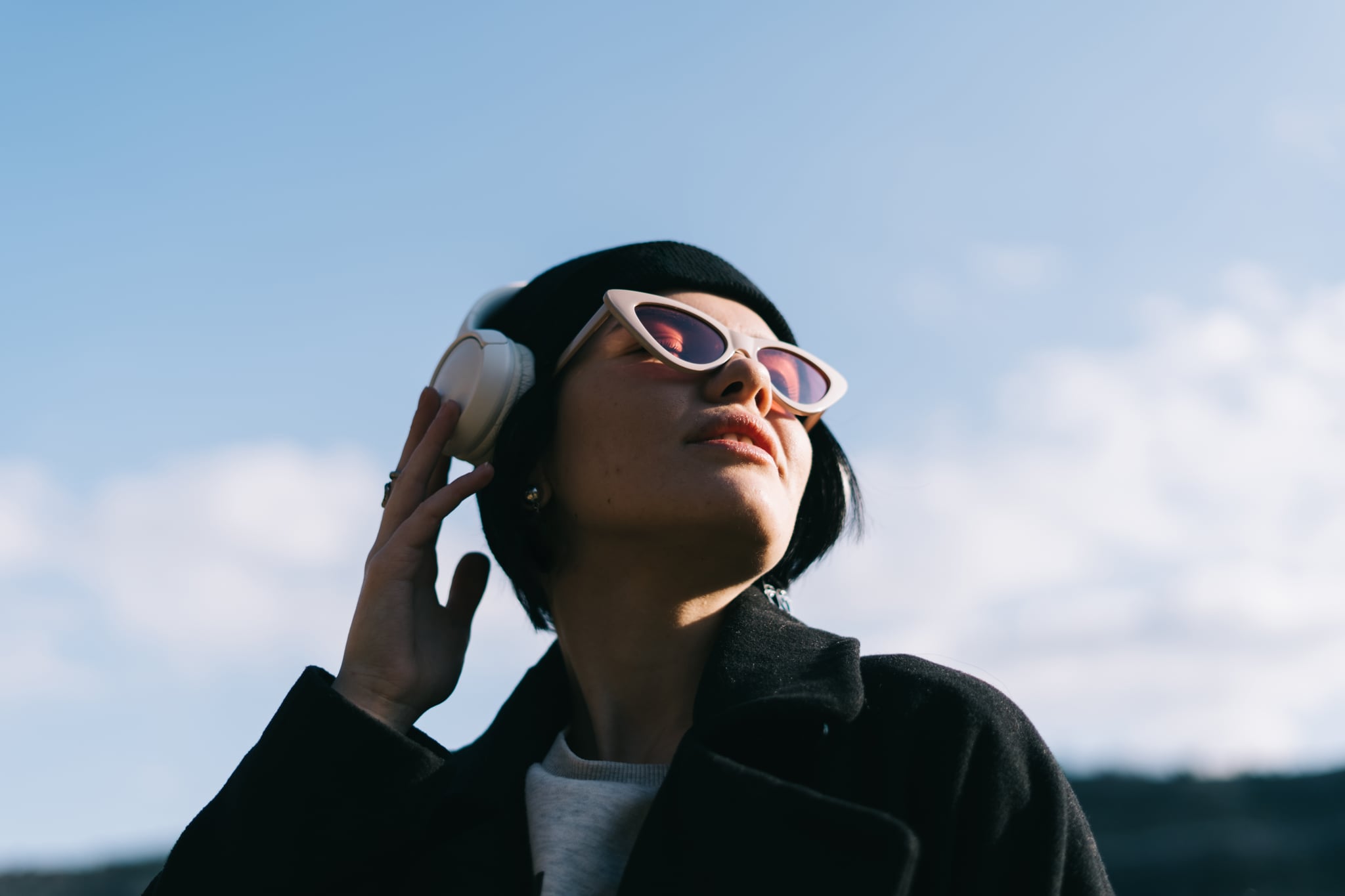 One of the beautiful things about TikTok is that within the hundreds of millions of active users, you can find little communities that seem to speak directly to you. The mental health community in particular has been using the platform to share relatable stories, talk about personal experiences, spread awareness, and provide affirming support. TikTok has even helped some people discover potential diagnoses, bringing light to the different ways conditions can present in daily life.

One new mental-health-adjacent trend circulating TikTok right now is being called "brain flossing," and it centers on 8D audio. This type of audio creates the sensation that sounds are moving around you in space. While 8D audio can be stimulating to anyone, TikTokers are claiming that neurodivergent folks may experience it differently than people with neurotypical brains. As such, some users are suggesting that this could even clue you in to the possibility of whether or not you're neurodivergent yourself.

It brings up a lot of questions: What, exactly, is brain flossing? Why does 8D audio feel the way it does? And can it clue you in on potential neurodivergence of your own? Here's the rundown.

"Neurodiversity describes the idea that people experience and interact with the world around them in many different ways; there is no one 'right' way of thinking, learning, and behaving, and differences are not viewed as deficits," according to a Harvard Health Publishing article from neurologists Nicole Baumer, MD, MEd, and Julia Frueh, MD. Neurodiversity encompasses the limitless variability in the ways people and their brains can exist and function.

Meanwhile, "neurodivergent" describes a type of brain that's simply "different than the 'norm,'" says Sharon Kaye-O'Connor, LCSW, a psychotherapist who specializes in neurodiversity. "Neurodivergent identities and conditions include autism, ADHD, dyslexia, OCD, apraxia, dyspraxia, Tourette's, and others." That said, the term "neurodivergent" is quite broad and can apply to people even outside these specific diagnoses who feel their brain works differently than others.

Related:
Society's Gender Norms Make It Harder For Women With ADHD to Get Help — and That Needs to Change

Brain Flossing and the Magic of 8D Audio

Brain flossing isn't exactly a scientific term; rather, it's the best phrase TikTokers have found to encompass the particular feeling they get when they listen to this type of audio.

"My understanding is that just like flossing gets rid of unwanted particles between teeth, 8D audio can provide a sense of 'brain flossing' by removing unwanted stimuli," says Abby Klemm, MT-BC, a board-certified music therapist. "With this technique, your brain can focus on the here-and-now sensory experience, giving you the opportunity to refocus, reconnect, and clear out any 'brain gunk.'"

But 8D audio also just feels like you're . . . flossing your brain. It appears to "move" between your left and right ears, bouncing from one side to the other or even swirling around your head. (Because of this, 8D audio is best experienced with headphones on; that way, the sound is isolated in each ear versus heard generally by both.)

Beyond the cool sensation, 8D actually lights up your brain in a unique way. "Your right and left brain are receiving the sensory input, respectively," Klemm explains. This provides something called bilateral stimulation (BLS), which describes any sort of auditory, sensory, or visual stimulation that crosses the body in a rhythmic pattern. BLS is powerful; it's even used as part of a type of psychotherapy called eye movement desensitization and reprocessing, which was originally developed by psychologist Francine Shapiro, PhD, in the late '80s. "The alternation can provide almost a sense of 'balance' to your brain," Klemm explains. "This then can 'clear out' your mind and provide a sense of relaxation and mental focus." TikTok users have commented on videos using 8D audio to share their experience, saying things such as, "I've listened to this too many times cause how it just makes me feel alive again," and, "It's like medicine for me."

Another reason 8D audio can feel so oddly wonderful: "Studies show that physical reactions to music or recordings (such as goosebumps) occur when there are more neural connections lighting up in the brain," Klemm explains. "Neural connections increase when you're alternating input between brain hemispheres." Since 8D audio bounces the input between both brain hemispheres and thus provides more neural connections, it can lead to more physical reactions and "access our brain's pleasure center by giving us a sense of auditory balance and satisfaction," she says.

While some TikToks imply that only folks who are neurodivergent can enjoy the brain-flossing effect, that's not quite true: anyone can experience the sensation. "For those who are not neurodivergent, the effect could still be relaxing and pleasure-inducing," Klemm says. "However, since neurotypical brains typically filter out a greater percentage of sensory input, the effect would likely not be as strong." Neurodivergent individuals can be more sensory sensitive, which could mean they're more attuned to the differences in input between the right and left hemispheres, Klemm explains.

It's also important to note that not everyone enjoys the effects of 8D audio. While plenty of people find listening to be calming or cool, others may consider the sounds overstimulating, overwhelming, or upsetting. For example, one TikTok user commented on a video, "my autistic/ADHD self recoiled HARD at this! at least I know learned something new about myself (again)." Other users have said the sound makes them feel "nauseated" or makes their "head hurt" or even that it's "unbearable."

How people experience 8D audio likely depends largely on a person's overall sensory preferences, and whether they're more "sensory seeking" or "sensory sensitive." People who fall into the latter camp may be less likely to enjoy the sounds, whether they're neurotypical or neurodivergent. (About one percent of people have a congenital inner-ear condition called semicircular canal dehiscence, which can lead to vertigo in response to certain sounds, according to research published in Scientific Reports. That said, it's unlikely that this is to blame for all adverse reactions to 8D audio.)

For some people who are sensory seeking, on the other hand, listening to the sounds can even be a form of stimming — a method of regulating one's sensory experience by creating movements or sounds that are often repetitive, Kaye-O'Connor says. Stimming is often used by people who are neurodivergent, but everyone stims in some way or another. "Types of stimming might include rocking, pacing, fidgeting, hand flapping, or vocalizations," Kaye-O'Connor says, but it can also take the form of listening to songs or watching videos on repeat. "Stimming is a way of mitigating sensory input from the environment to help keep your nervous system calm and regulated to avoid overwhelm. It can also help those with a more sensory-seeking profile to get the sensory input they need to feel calm and comfortable."

Can Brain Flossing Tell You If You're Neurodivergent?

Simply put: your reaction to 8D audio is not a definite "tell" as to whether or not you have any neurodevelopmental disorder. The only way you can be properly diagnosed is by consulting a professional, such as a therapist or neurologist.

"Neurodivergence is so nuanced and complex that I wouldn't rely on any one particular experience to suggest or rule out a neurodivergent identity," Kaye-O'Connor says. "Even within the neurodivergent population, you will naturally see a wide variety of responses to the 8D audio experience."

You can, however, observe your own unique responses to sensory experiences to gain insight into your "specific sensory preferences and sensory profile," she says. "When listening to 8D audio, what do you notice about your own experience? Is the experience soothing, grounding, and focusing? Or does it feel more overwhelming, disorienting, or even dizzying?"

This can give you a better understanding of your own sensory needs and the types of sensory experiences that are most helpful for you, for example, when you're trying to relax, work, or study. And if listening to 8D audio clears your head or makes you feel great, there's no risk to enjoying the sounds. You can find more of it on TikTok or YouTube.

If you think you may have a neurodevelopmental condition (such as ADHD or autism spectrum disorder) and you'd like treatment, seek out a pro. For example, try searching on a platform like Choosing Therapy to find a neurodiversity-affirming therapist.

Related:
ADHD Can Make It Difficult For Women to Participate in Sports — but It Doesn't Have to Be That Way
Image Source: Getty Images / Petar Tutundziev / 500px
AutismADHDMental Health